Newcastle United are looking into a deal to sign Dean Henderson from Manchester United in the summer transfer window, according to Italian journalist Fabrizio Romano.

The goalkeeper’s future at Old Trafford has been called into question in recent months due to his lack of playing time at the club under both Ole Gunnar Solskjaer and Ralf Rangnick.

The 25-year-old has been limited to just three appearances in the cup competitions for the Red Devils this season, with David De Gea having firmly re-established himself as the number one between the posts at Old Trafford.

According to Romano, Newcastle United have held an interested in landing Henderson for some time, and they could look to bring him to St James’ Park this summer.

The Italian journalist says that Manchester United will make a decision in the summer about whether to let the shot-stopper leave in what would be a likely loan deal or not – and that Henderson wants to be a regular starter next season.

“Man United will make a decision about Dean in the summer whether let him go on loan or not. He wants to play as starter next season.” 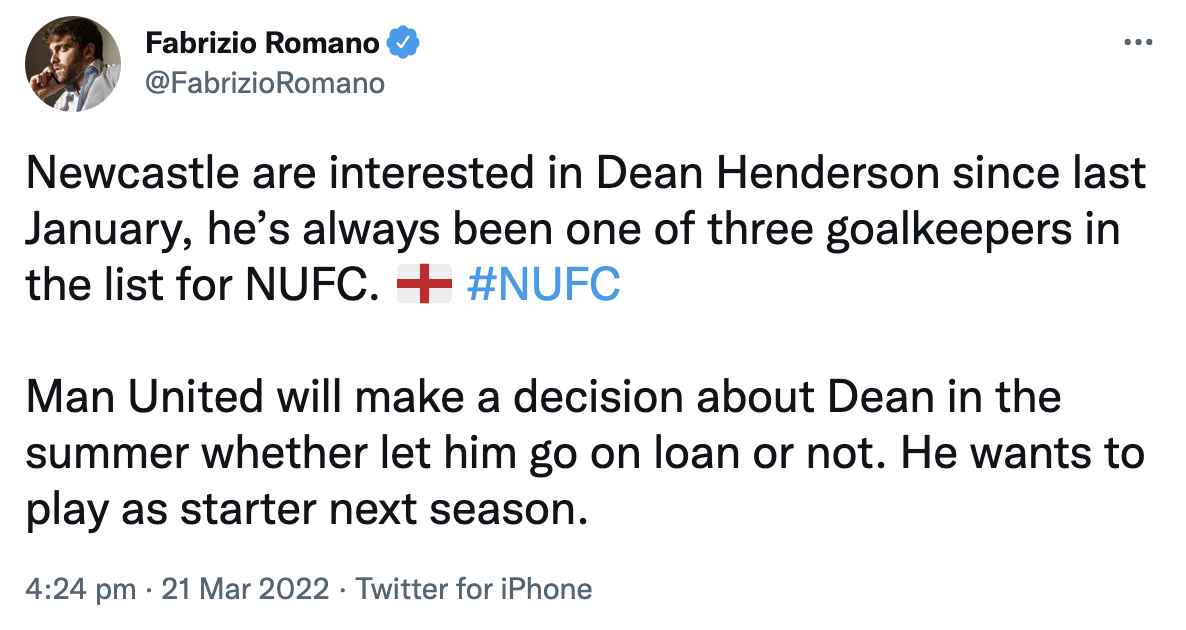 De Gea has been in good form for Manchester United this season and has won four of the seven player of the month awards as voted by the club’s fans.

The 31-year-old Spaniard has won the club’s player of the year award four times previously and he admits it would be an honour to do it again this term.

“Yes, of course, it’s very special for me. I appreciate a lot the love of the fans and the support and, if I can win another one, it will be absolutely amazing,” said De Gea.

“But, to be honest, the first thing is to try to win big trophies as a team. That is the most important thing.

“Of course [f you win, it means] you did a great season with great consistency and this is the most difficult thing in football, being very consistent. It would be, like I say, amazing to win it again, so let’s try.”