Fabrizio Romano has taken to social media to claim that Manchester United are closing in on appointing Erik ten Hag as their new manager.

The Red Devils are on the lookout for a new head coach to take over from interim boss Ralf Rangnick at the end of the season, and Ajax manager Ten Hag has been touted as one of the leading candidates for the Old Trafford job.

Reports this week have suggested that Manchester United now appear to have made the decision to recruit Ten Hag as their new manager ahead of next season, with The Athletic reporting that the Red Devils have reached an “agreement in principle” to appoint Ten Hag.

Now, Italian journalist Romano has appeared to back up those suggestions by claiming that Manchester United are now working on producing the paperwork to finalise the agreement and announce Ten Hag as their new manager “as soon as possible”.

Posting on his personal Twitter account on Wednesday, Romano said: “Manchester United are working to prepare contracts and paperworks this week in order to announce Erik ten Hag appointment as soon as possible. Sources close to the manager consider it as matter of time.

“Final details of coaching staff and agreement with Ajax are needed.” 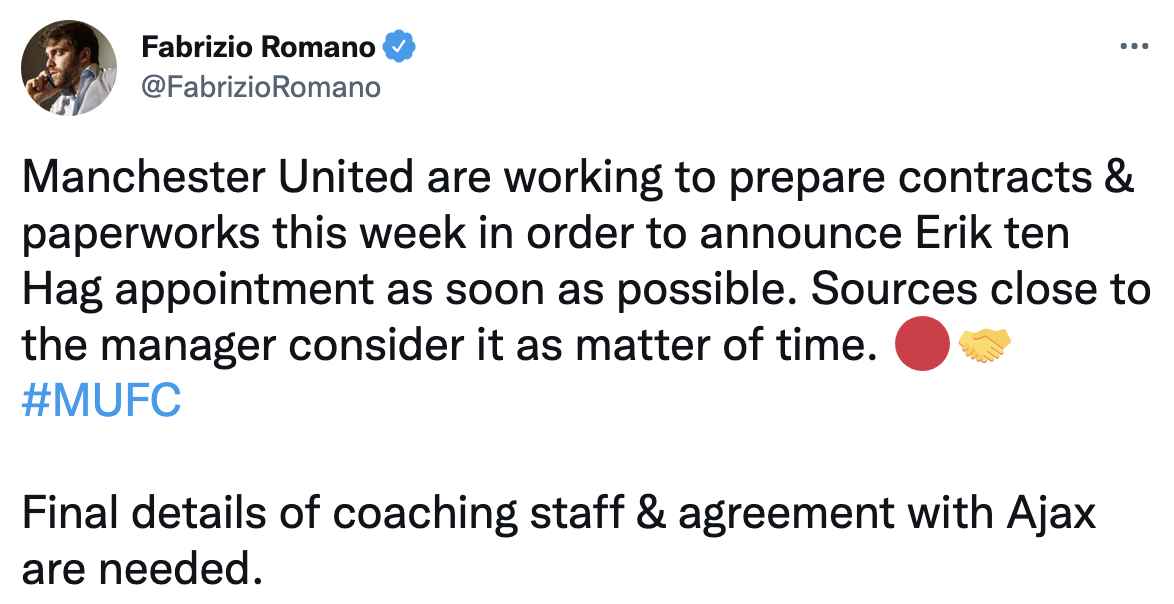 According to the report in The Athletic, which was published on Tuesday, Ten Hag is expected to join the Old Trafford outfit on a contract to run for up to four years.

The story also claimed that although former Tottenham Hotspur boss Mauricio Pochettino had been on the club’s shortlist, the Red Devils have decided against appointing the PSG manager.

Meanwhile, Manchester United will aim to bounce back from their 1-0 loss to Everton at the weekend when they take on Norwich City at Old Trafford on Saturday afternoon.