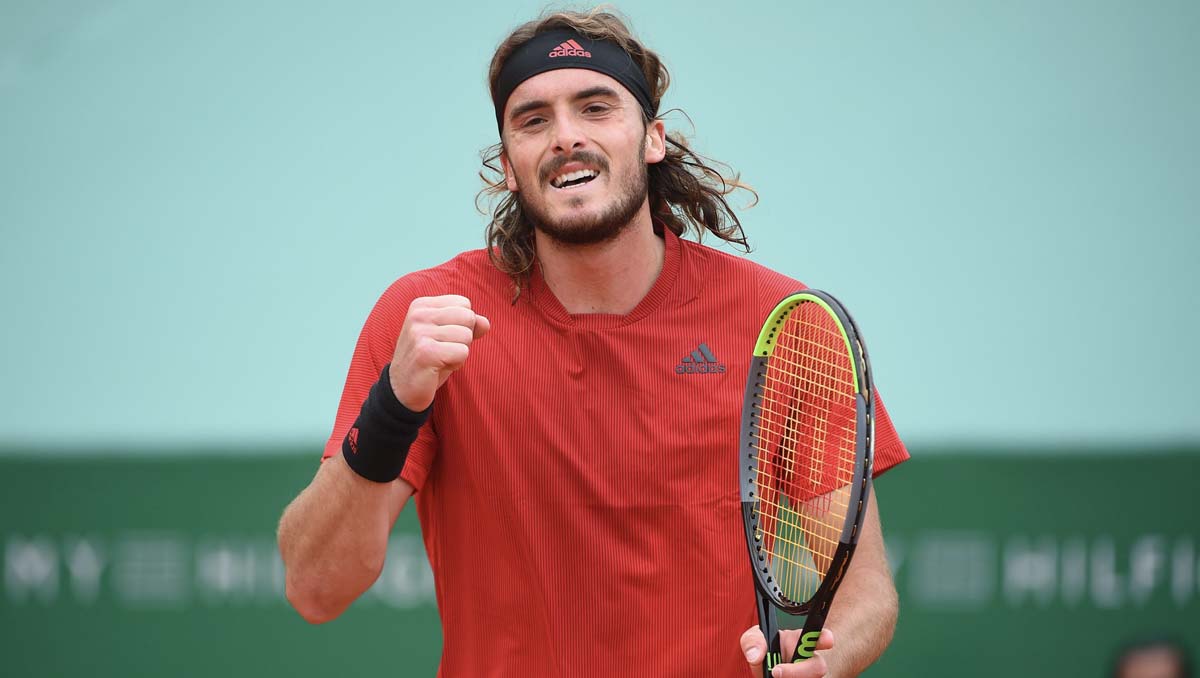 It was certainly no surprise that No3 seed and defending champion Stefanos Tsitsipas worked his way through the Monte-Carlo draw to the sharp end of business.

The young Greek was not only a former champion at the tournament, and an ATP Finals champion, he was a former world No3, and had a 6-3 record over the highest seed in his half, No2 Alexander Zverev. Indeed, Tsitsipas had beaten his German rival on the clay of Roland Garros in last year’s semi-finals, before being beaten by world No1 Novak Djokovic after taking a two-sets lead.

And this week, he beat Zverev again, after the German had been forced to the limits by No9 seed Jannik Sinner in the quarters.

Indeed, it was the Argentine Diego Schwartzman who came closest to putting out the defending champion, as the No12 seed took a 4-0 lead in the deciding set late on Friday night in a thriller of a quarter-final.

However, looking at the top half of the draw, it was a surprise that Djokovic was not again in the picture as the Monte-Carlo final came into view. He was a two-time champion and twice runner-up, and while this would be only his second tournament of 2022, and his first since losing in the quarters of Dubai almost two months ago, he was fit, fresh, and well-practised on these very courts: His home is just down the road from the famous Club.

The top of the draw opened up, too, following the withdrawal of Djokovic’s first schedule seed, Roberto Bautista Agut. But it quickly opened much wider, as the unseeded 22-year-old Spaniard with a 4-9 win-loss record for the season, Alejandro Davidovich Fokina, beat the world No1, then David Goffin, Indian Wells champion Taylor Fritz, and Grigor Dimitrov.

Until Monte-Carlo, the Spaniard had scored just one top-10 win this season, but now he arrived with a bang into his first ever tour final with five more wins, four of them against top-50 opponents, three of whom were already Masters champions themselves.

With his victory over former world No3 Grigor Dimitrov, also unseeded and also taking down three seeds on his way to the semis, Davidovich Fokina celebrated as though he had won his first title—understandable, given he had never reached a final before, let alone at a Masters.

“I am so, so happy to be in the final. It is a dream come true… When I was a kid I was dreaming about this day.”

The danger of such overwhelming joy, and of reaching so many milestones in the space of one week, is that it can be hard to believe that still more is possible just one day later.

He, like Tsitsipas, had needed marathon efforts to get to the semi-finals, but Davidovich Fokina had also needed tough three-setters to beat Djokovic and then in his Dimitrov semi. And he had played one more match than the Greek. What, then, did he have left?

Both started with their signature aggressive style of tennis, and each of the men had shown their athleticism, ability at the front of the court, and plenty of variety in the trajectory and spin they could apply to the ball.

And if there was any concern that the bristling confidence of the Spaniard would be dampened by nerves, it was soon allayed when he broke first in the third game of the match. Tsitsipas, though, quickly broke back, to love, and each found their range and stride on serve for a sequence of clean holds.

The next chink in the Spaniard’s armour came in the eighth game, and Tsitsipas ran him into the ground, directing from corner to corner, and deploying his single-handed slice to great effect. The Greek broke to take a 5-3 lead, and served out to love for the set, 6-3, after just half an hour.

Tsitsipas continued his dominant form into the second set, breaking with ease, then consolidating for a 2-0 lead. However, that seemed to galvanise Davidovich Fokina into greater effort, and with the kind of physicality and determination that has won over so many fans this week in Monaco. The Spaniard broke back at the first opportunity, and then held to love.

A gruelling ninth game, though, seemed to be a turning point, with Tsitsipas finally breaking at the third attempt: He would serve for the title.

Davidovich Fokina, as so many times this week, would not be bowed, though. He broke, and took the defending champion to a tie-break, but there, Tsitsipas would not be denied, stringing together five straight points for 5-1, and converting his second match point to seal the deal, 7-6(3).

The last 12 months have not by any measure been a dry patch for the Greek star. He went on from his 2021 Monte-Carlo victory to reach the final of Barcelona, win Lyon, make his first Major final at Roland Garros, and reach two more Masters semis. And this year, he made the semis of the Australia Open, the final in Rotterdam and the semis in Acapulco.

But this is his first title since Lyon, and what a way to get back on the ATP honours board. It is his eighth title—from 19 finals—and his fourth on clay, and it means he joins an elite Masters club. Only a few active players have won multiple Masters titles, including Djokovic, Nadal, Roger Federer, Andy Murray, Zverev and Daniil Medvedev.

Meanwhile, Davidovich Fokina can expect to rise inside the top 30 for the first time, and now has plenty more clay tournaments in which to ride his form and confidence, beginning with Barcelona, where he opens against a qualifier after a quick turn-around along the Mediterranean coast. He also happens to be in the opposite half to the top-seeded Tsitsipas.