French Open 2022 preview: Super Swiatek is one to beat as she targets second Roland Garros title

World No1 is 35-3, with five straight titles; Raducanu up against it in tough section with Jabeur, Plus more facts, figures and matches to catch 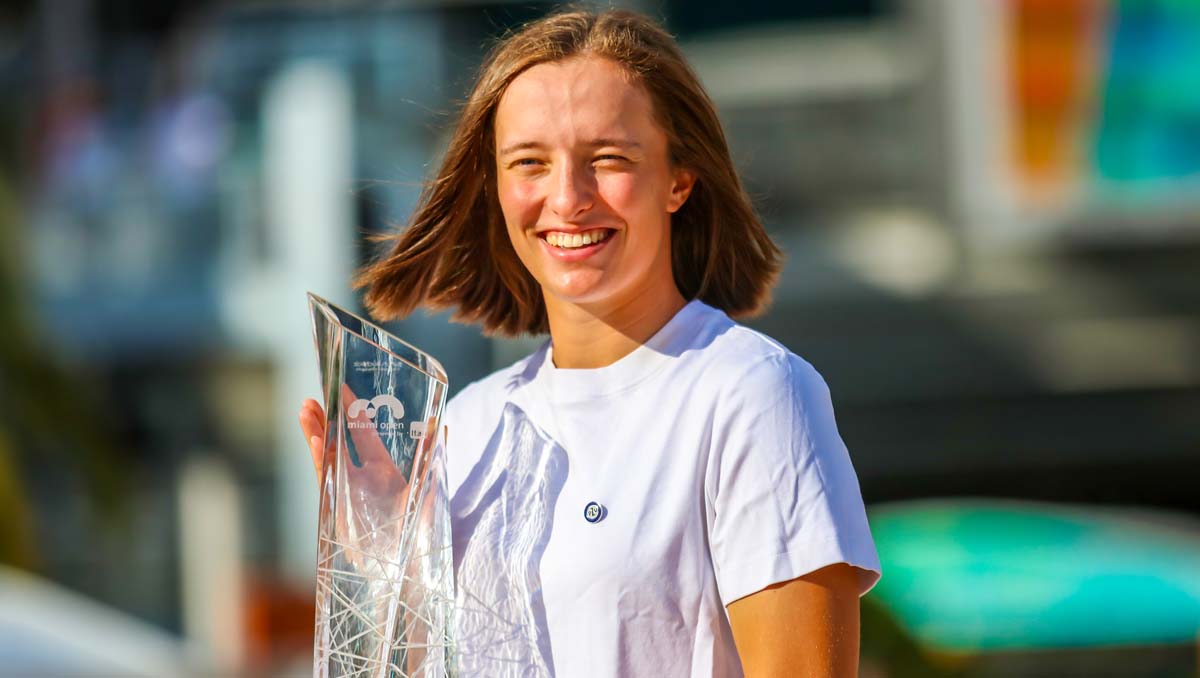 The name of one young woman has been on the lips of every tennis fan, every tennis pundit, even of most fellow players. Such is the impression made this season by Iga Swiatek.

Yes, the young Pole made one of the French Open’s most outstanding runs to the title 18 months ago, when she was 19 years old, ranked 54 in the world, and dropping an average of just four games a match.

Her consolidation began with the Rome title last May, and then as the No8 seed, she made her allotted quarter-final back at Roland Garros—reaching the doubles final, too—and went on to play at the WTA Finals.

So by 2022, this smart, now-20-year-old, who had also sought out the support of a sports psychologist, decided to evolve her attacking game, and the talent package stepped up another level. The semis at the Australian Open became a launch pad for five straight titles, four of them at the 1000 level. The stats speak for themselves: a tour-leading 35-3.

Swiatek was by now ranked No2 as she headed to the sunshine double, Indian Wells and Miami, and with the retirement of Ash Barty, she became the more-than-worthy No1.

Last year’s French title, though, fell to the Czech Barbora Krejcikova, who was already No1 in doubles courtesy of a clutch of Major doubles titles. Indeed the Czech won both singles and doubles title in Paris last year.

However, Krejcikova was hit early this year with an elbow injury, and has not played since Doha in February. So while she is still ranked and seeded No2, the Czech has played not one competitive match on clay. It looks, it has to be said, as though any challenge to Swiatek will have to come from elsewhere.

But who, against such a winning scenario—a 29-match winning streak—can step up and halt those winning ways?

Swiatek’s opener should not hold her up, in the shape of qualifier Lesia Tsurenko, but her second, either the 42-ranked Alison Riske or young Ukrainian Dayana Yastremska, could be tricky. And the Pole’s first seed, Liudmila Samsonova, took her to 7-5 in the third set of the Stuttgart semis just a month ago.

But come Round 4, and Swiatek could be facing a fellow former champion: Simona Halep and Jelena Ostapenko are lined up to contest that fourth-round place. Halep, in particular, is a player never to be underestimated: She was ranked No2 at the start of last year, missed months during the peak of the season with injury, and slipped to 22 by the end of season. But this year, she has been building a head of steam through the hard-court swing, and made the quarters in Madrid.

And while Halep’s Rome run was not ideal preparation, she will not be deterred—especially with Patrick Mouratoglou now in her corner.

Come the quarter-finals, and the next top seed is Karolina Pliskova who, in a truncated 2022 season, has struggled to find the kind of form that took her to two Major finals and the No1 ranking. More likely to emerge from this section is in-form American Jessica Pegula, runner-up in Madrid, and with a fine semi run in Miami—until Swiatek beat her in straight sets.

Also here is No30 seed and Madrid semi-finalist Ekaterina Alexandrova, who won six matches there before losing to eventual champion, Ons Jabeur. She also reached the semis in Charleston.

They are the same age and height, both have big power games, and both have enjoyed No2 status. Paula Badosa and Aryna Sabalenka have also played one another three times in the last nine months, most recently on Stuttgart’s clay, a tough win for Sabalenka, who has made two Major semis already.

But Badosa began her surge, ranked 71, during last year’s clay swing, making semis in Charleston and Madrid, and winning Belgrade. Then came her first Major quarter-final at Roland Garros. She ended 2021 with a semi run at the WTA Finals after winning Indian Wells.

So far this year, though, it has been the hard courts that served the Spaniard well, and if she is to set another Sabalenka shoot-out, she must get by some tricky hurdles such as Veronika Kudermetova and Elena Rybakina.

Sabalenka has blown hot and cold since she hit the ground running back in 2018 at just turned 20. Then, she won the first of four WTA1000 titles spanning almost four years, and made inroads in the Majors last year with semis at Wimbledon and the US Open. But it will have done her confidence little good to lose three times to Swiatek this season already: She won just three games in their Rome semi-finals.

Also in this quarter is Daris Kasatkina, who almost reached the final in Rome last week, and Australian Open runner-up, Danielle Collins.

British quarter bursting at the seams

So recent is Emma Raducanu’s transition to clay, after her remarkable run to the US Open title last year, that her first match-win on the red stuff came in Fed Cup competition in April. She has gone on to make her debut in Stuttgart, Madrid and Rome, where she was forced to retire in her opener.

All of which makes her campaign in an eighth scheduled to bring Angelique Kerber in Round 3 and the in-form No6 seed Ons Jabeur in the fourth round an especially tough one for the debutante.

Jabeur is surely one of the favourites to reach the final after reaching the final of Charleston and Rome, and winning Madrid with her smart, skillful, all-court tennis. Indeed she record-making Tunisian could put paid to all three British women in the draw: Harriet Dart is scheduled for Round 2, Heather Watson sits between Kerber and Raducanu. Indeed with Petra Kvitova also in the mix, this is one of the toughest sections in the draw.

That said, it is almost impossible to predict who Jabeur could meet in the quarters. The section topped by No4 seed Maria Sakkari also features Belinda Bencic, Leylah Fernandez, Amanda Anisimov, plus the unseeded Bianca Andreescu and Naomi Osaka.

Indeed a case could be made for several of them, and the ultimate semi-finalist will certainly have earned their place among the last four. There, she will be scheduled to meet defending champion Barbora Krejcikova, the surprise victor more famed for her prodigious doubles success until she won both the singles and doubles Roland Garros titles a year ago. But her absence since Doha, hindered by that elbow injury, force attention elsewhere, to the in-form Jil Teichmann or Victoria Azarenka to emerge to Round 4, where the likes of Garbine Muguruza, Coco Gauff and Anett Kontaveit will hope to contest a semi-final place.

But also buried in this quarter are Kaia Kanepi—an opening hurdle for Muguruza—and Sloane Stephens.

No21 Anastasia Pavlyuchenkova; No32 Elina Svitolina; No35 Marketa Vondrousova

Krejcikova (once and defending); Swiatek (once); Halep (once, and runner-up once more); Ostapenko (once); Muguruza (once)