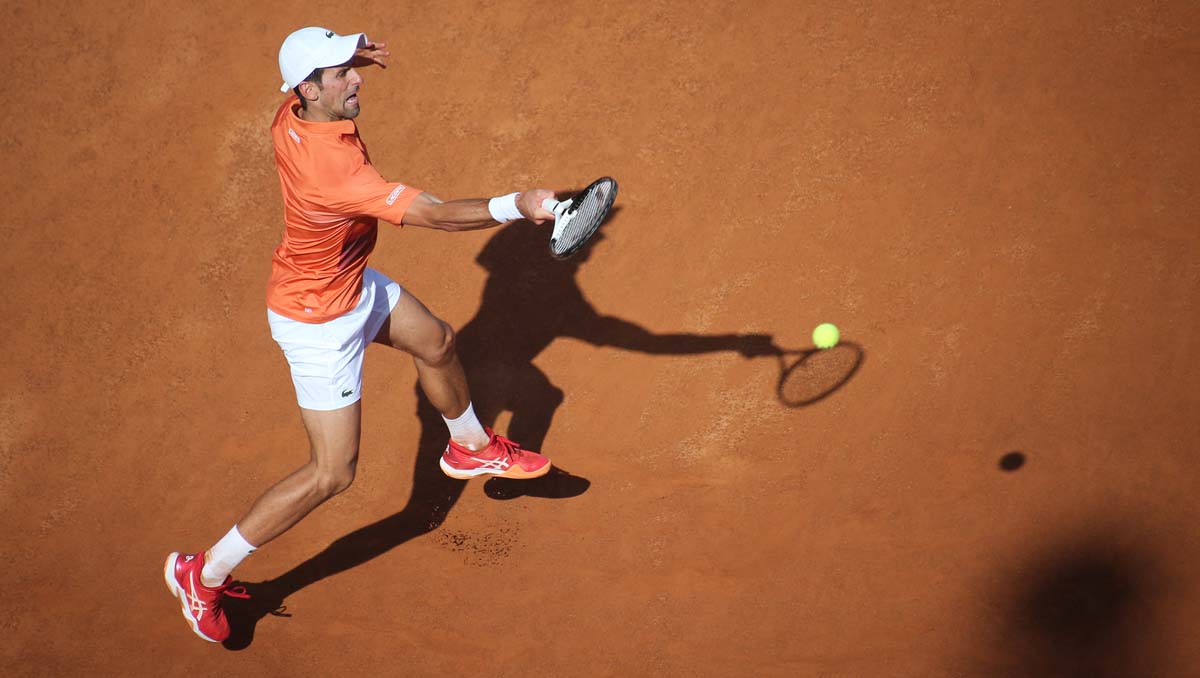 There was cake, as there has to be when such a big milestone is achieved on a tennis court.

Novak Djokovic reached the final of the Rome Masters with an assured, confident victory over No5 seed Casper Ruud to notch up his 1,000th match-win, something achieved by only four other players in the Open era: Jimmy Connors, Ivan Lendl, Roger Federer and Rafael Nadal.

It was the latest in three big targets ticked off at the Foro Italico this week. The five-time champion, who played his first main draw in Rome back in 2007, had never fallen short of the quarter-finals, and reached 11 finals: This was now his 12th.

He had won more matches at this Masters than at any other, and he had won all the others at least twice. With his opening-round win over Aslan Karatsev, Djokovic notched up his 60th win at the event.

By reaching the semi-finals, he was assured of extending his place at the top of the ranks, which might otherwise have switched to Daniil Medvedev. He did, of course, manage that with his win over No8 seed Felix Auger-Aliassime, ensuring his 370th week at No1.

And reaching this 12th final stacked up that 1,000 wins. He could have had three cakes, though the red and white slab on Saturday night was enough for the sweetest tooth.

Of course, it was all work in progress for the man who already had more Masters titles than anyone else, 37 of them. The target was to win No38, and after a relatively modest start to his clay season—he had been able to play just one hard-court event before April ushered in the clay—he was rapidly showing just why he was the dominant player in tennis.

An opening work-out in Monte-Carlo was followed by four more three-setters in Belgrade, and then three further matches in Madrid, the last a marathon effort against eventual champion Carlos Alcaraz.

But Rome has always been a ‘happy place’ for the Serb—witness those statistics—and on the oh-so-familiar Court Centrale, he had yet to drop a set.

The same could not be said of the young challenger, No4 seed Stefanos Tsitsipas, who had saved two match points in his opening match against Grigor Dimitrov. He went on to lose the opening set against Karen Khachanov, too, and then against No2 seed Alexander Zverev.

He did, though, lead the tour with 31 match-wins this season, including his second Monte-Carlo title last month. He did, too, have a good record at the French Open—the semis in 2020, and runner-up last year. That he had lost on both occasions to Djokovic, both times in brutal five-setters, did not auger well on this Sunday afternoon. He had also lost to the Serb right here last year, having won the first set.

Indeed he had lost his last five matches to Djokovic, and all four of their clay meetings. It was a mountain to climb, and nowhere more so than at the Foro Italico.

It was a blistering start by Djokovic, a heart-sinking start for the Greek. A break to love, and eight of the first nine points made it 2-0 to the world No1. The third was a longer game, two deuces, but just the same outcome: a break, 3-0, plus a warning to the already frustrated Tsitsipas for breaking his racket.

Djokovic’s serve had been outstanding—just three points dropped—but his punishing return of serve burst huge holes in a Tsitsipas serve that was only finding the mark half the time with his first delivery. He won just seven points on his own serve, a tally of 10 points in the set out of 37 played.

It would take mental resolve and exceptional physicality to turn this around. Certainly the crowd was hoping for more, and they cheered his first game of the match, an opening hold to set two. With the first point against the Djokovic serve in the fourth game, the chant went up “Tsitsipas, Tsitsipas!” He obliged with a break and a 3-1 lead but now he had to consolidate.

That done, Djokovic shook his head during the change of ends. He began to deploy his usually killer drop-shot, but Tsitsipas reached one for a winner, and the next hovered on top of the net before falling back: break point to the Greek. The Serb survived, and then edged an advantage against Tsitsipas. However, the Greek was producing better first deliveries, and held for 5-2.

But trouble loomed as Tsitsipas served for the set, two break points, and the Greek forced a forehand wide. A quick Djokovic hold, and they were all square, 5-5.

Two love holds and they went to a tie-break, where Djokovic edged the advantage to change ends 4-2 up. Tsitsipas fought back to 5-5, but the Serb held serve to earn the first set point, and a wide backhand from Tsitsipas was all he needed, 7-6(5), after little more than an hour and a half.

He afterwards admitted on court: “I pleasantly surprised myself. I had a game plan, I knew what to expect and what I had to do, and I did play a perfect [first] set. After that, a little tight at the start of the second… Somehow, I managed to find the right shots at the right time.”

So Djokovic’s first title of the year extended his record to 38 Masters titles, and with it he became the oldest ever Rome champion. It could not be better timing on a better court for the world No1 as the tour heads to the clay climax at the French Open.