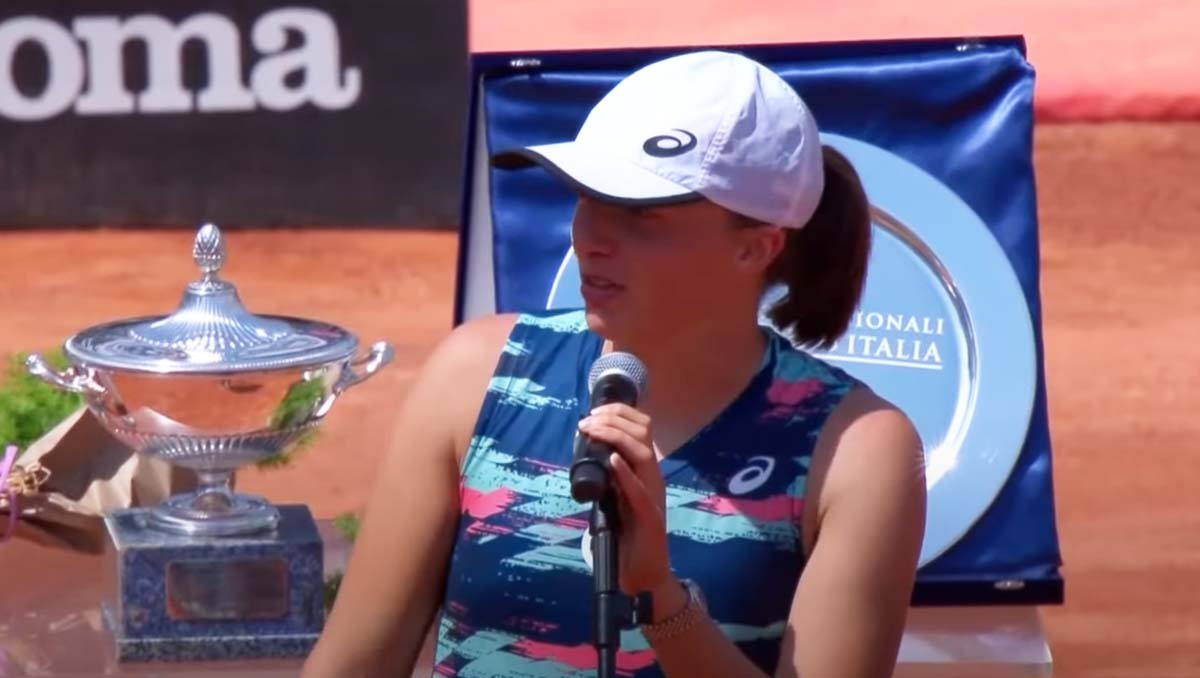 So the final day in Rome came down to this: The two most in-form women by some distance, world No1 Iga Swiatek and No7 Ons Jabeur, would contest the last clay 1000 title of 2022.

They already led the tour this year in match-wins, Swiatek with 34, Jabeur with 25. The latter had the most clay wins this season, 17, following her final run in Charleston and her first 1000 title in Madrid.

Swiatek bypassed Madrid, having won the other clay WTA500 in the calendar, Stuttgart, but she led all-comers in just about every other category: an unbeaten run of 27 matches via three 1000 titles in Doha, Indian Wells and Miami, plus, of course, Stuttgart; 26 of her 34 match-wins were completed in straight sets, and 13 of those sets had a 6-0 score-line.

These two players, then, topped the Race to the WTA Finals, but Swiatek had already accumulated more points than the top seed, Aryna Sabalenka, at the 2021 playing of that tournament. Ash Barty did have more than Swiatek’s current 4,975, but withdrew before the event—and in any case, the young Polish star was already well ahead of the now-retired Barty’s curve, with six months and three Majors yet to be played in 2022.

It was an astonishing achievement for the woman who is still improving with each tournament she plays—and is still just 20 years old.

But… could she defend her Rome title? For the in-form Jabeur, though now age 27, had also shown steady, insistent, crowd-pleasing improvements since her early talent took her to the Roland Garros junior title back in 2011.

She did not win her first senior title until less than a year ago, ranked 24, on the grass of Birmingham, and went on to reach the quarters at Wimbledon—where she beat Swiatek in the fourth round. Ranked 20, she also beat the Pole in Cincinnati, and broke the top 10 with a semi finish at Indian Wells in October.

With her fine 2022 season, she would reach a new career-high of No7 come Monday, and No6 if she beat Swiatek, but there was the rub. With one extra match in her legs—the Tunisian missed out on a first-round bye as the No9 seed—and two three-setters in the quarters and semis, she was at a physical disadvantage. And she had, indeed, looked a little tired at the end of her two-hour contest with Daria Kasatkina.

The scale of Jabeur’s task was also thrown into deep relief by one other statistic: She was aiming to become just the third woman to win both Madrid and Rome back-to-back—along with former world No1s, Dinara Safina and Serena Williams. So Rome, and tennis fans around the world, would at the very least hope for a more competitive match than last year’s final, a 6-0, 6-0 drubbing by Swiatek of No9 seed Karolina Pliskova.

Jabeur, arguably, did have something that many of Swiatek’s opponents this week, and in that 2021 final, did not: A a combination of power with plenty of variety and rhythm-breaking touch.

However, in the second game, a first drop-shot attempt resulted in a lob winner from Swiatek. The Pole, with an easy opening hold, went on to break for 2-0. And she very nearly broke in the fourth game, too, but Jabeur began to slot some big forehands and serves to stave off the threat.

She then went after the Swiatek serve in the seventh game, uncorking that signature drop shot to great effect. The Pole overhit two backhands and faced deuce for the first time, but steadied the ship with a racing net pick-up, 5-2.

All the Pole’s speed, sliding grace, and balance came to the table as she tackled a couple of drop-shot replies, fired to the corners, and broke for the set, 6-2.

Yet the Tunisian got an ovation in the first game of the second set, pulling off a perfect lob winner for deuce against the Pole’s serve, and then earning her first break chance with a searing forehand winner. Still, Swiatek held her off, 1-0, and Jabeur could only shrug her shoulders as the Polish attack began in earnest.

The defending champion fired off winners to the sidelines, returning serves in a flash to opened the door just a crack in the fifth game, fluffing a net attack and then hitting a forehand wide for two break points. Jabeur found her best, a net finish, to pull off her first break.

The Tunisian had rallied from 6-1, 5-2 down to beat Maria Sakkari in the quarters, and saved match-point against Kasatkina in the semis, but a comeback here was surely too much to ask?

Jabeur threw in a love hold, 4-2, and went after the Swiatek serve again with real attack, pulling off an extraordinary drop-shot to work three more break points. Swiatek upped her level to save them, but serving into the sun, double faulted: a fourth bite of the cherry for Jabeur.

That brought the best rally of the match, a cat-and-mouse exchange at the extremes of the court. Swiatek roared to her box with her hard-won hold, 5-2. She had engaged fifth gear, and having done so, finished it off with a final break, 6-2.

She fell to the court, clearly overwhelmed by the moment, exhausted by the achievement, and needing to hug those closest to her. But the first hug came from her worthy opponent: Jabeur and Swiatek embraced long and hard.

But for spectators, it was a moment to take a step back and admire the statistics: 28 straight wins, five consecutive titles, and only the second woman after Serena Williams to win at least four WTA1000 events in one season—and the tennis year is only half over.

Swiatek won her very first title as a teenager at Roland Garros. At this year’s French Open, she will turn 21, and this time, will be one of the hottest favourites for the title in many a year.