Arsenal are closing in on a deal to sign Gabriel Jesus from Manchester City this summer, Fabrizio Romano reveals

Arsenal are closing in on a deal to sign Gabriel Jesus from Manchester City, with the Gunners now in “very advanced talks” to complete the transfer, according to Italian journalist Fabrizio Romano.

The north London side have been credited with an interest in bringing the Brazilian forward to The Emirates this summer as Mikel Arteta looks to strengthen his options in attack ahead of the 2022-23 campaign.

Gabriel Jesus’s future at The Etihad has been a source of speculation in recent weeks following a lack of first-team action last season, with the forward having only started 21 of City’s 38 Premier League games last term.

The 25-year-old’s situation at City has also been made more complicated by the arrival of Erling Haaland from Borussia Dortmund in this summer’s transfer window.

Now, according to Italian reporter Romano, Arsenal are closing in on a deal to bring the forward to The Emirates, with the Gunners having held “advanced talks” ahead of the “key details” that need to be ironed out for the move to go through.

Romano also says that both Tottenham Hotspur and Paris Saint-Germain are waiting in the wings and are both also potentially interested in a deal for the Brazilian attacker.

Posting on his personal Twitter account, Romano said: “Gabriel Jesus deal update. Arsenal are working on it and negotiations are very advanced – Arsenal will now need to be fast on final, key details involving player/agents to get the deal done and avoid twists.

“Tottenham and PSG, still waiting to see the end of this story.” 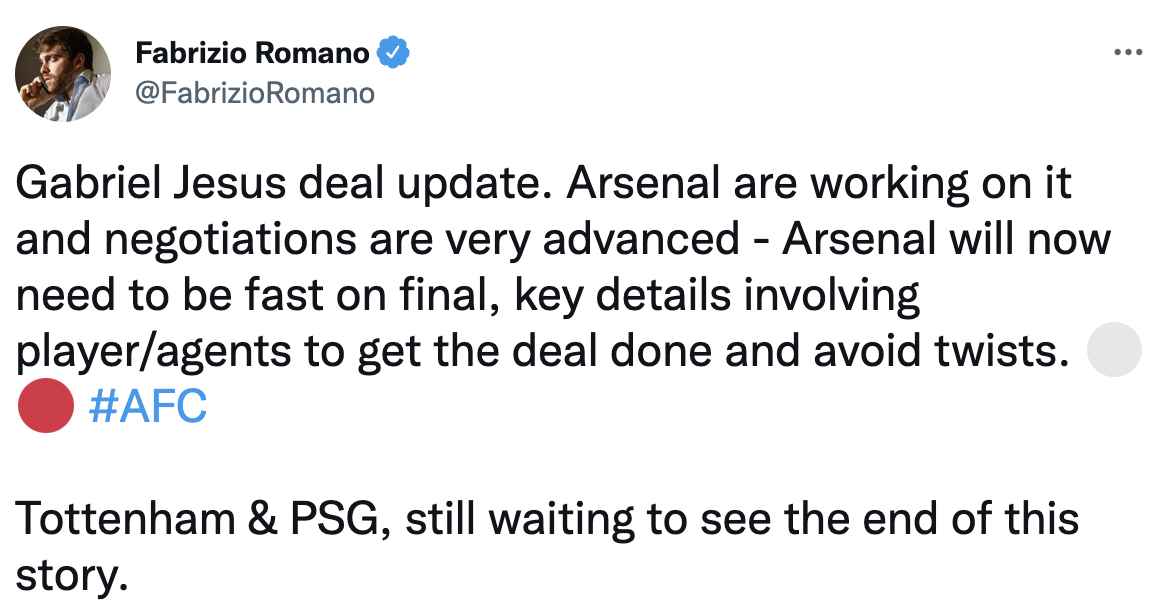 He also scored once in five cup games for the English side last season.