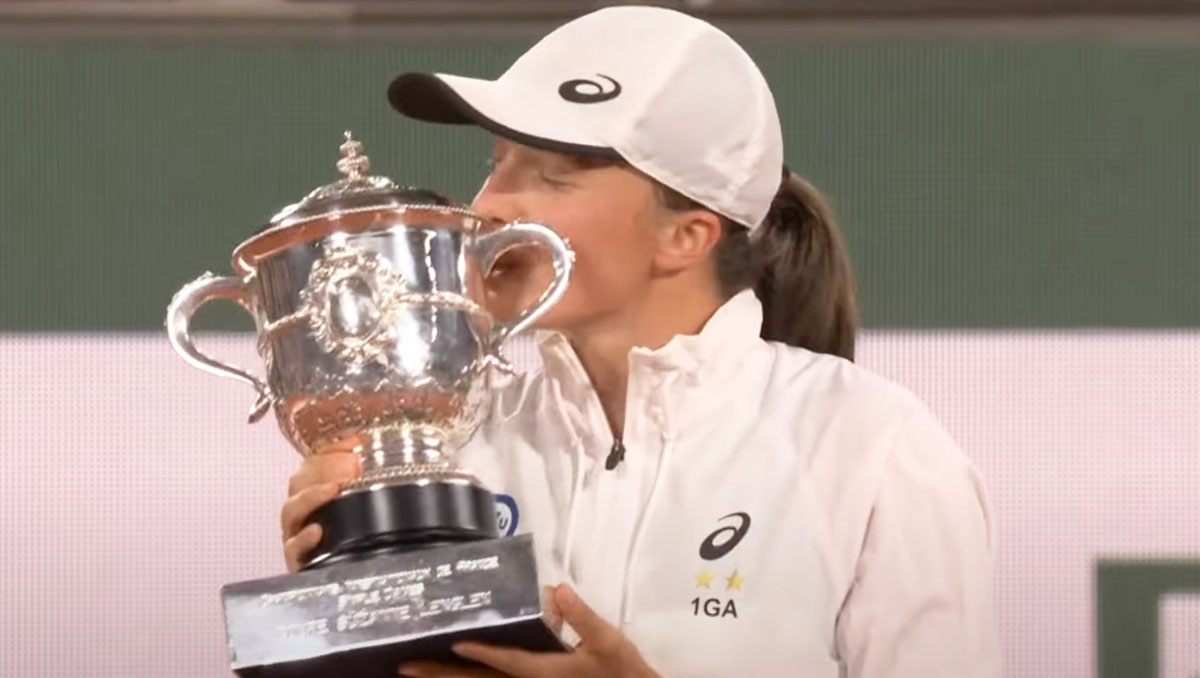 Ahead of her second Roland Garros final, the former champion and top seed Iga Swiatek was touted my most as the favourite, the woman who would bring all her experience to bear against a teenage opponent, No18 seed Coco Gauff.

After all, the Polish star won her first Major on the same Philippe Chatrier court 18 months ago, herself still a teenager, without dropping a set, and dropping precious few games either.

Back then, she was ranked 54 in the world, and had never won a tournament before.

The Adelaide and Rome titles in 2021 ensured her first WTA Finals, and she opened 2022 with a semi run at the Australian Open.

Hard work and the help of a sports psychologist continued to develop the outstanding qualities of the Pole: athleticism, speed, tactical nous, and self-belief. But even her most ardent admirers may not have predicted just how dominant Swiatek would become in so short a time.

Come February, she began a streak that is now up to 34 wins via five straight titles—four of them back-to-back 1000s. She had a 43-3 win-loss tally for the season as she headed into her sixth consecutive final, and replaced the retired Ash Barty as No1 many weeks before. And if she won her second French Open title, she would top the rankings with twice as many points as the world No2.

But it was not just the sheer number of match-wins that impressed: It was also the style of those wins. She had accumulated a Tour-leading 15 6-0 sets this year, two of them in this tournament, and had dropped only five games against No11 seed Jessica Pegula and three games against No20 seed Daria Kasatkina in her quarter- and semi-final matches.

Meanwhile, during the course of her Paris campaign, she revealed what a multi-dimensional player she has become in a diary series for the BBC, whether in her rock-music taste, her international reading lists, her cultural interests, or her views on social media. It is as though she was born for the role of world No1 and tennis ambassador: And yet she only turned 21 this week.

The naïveté of youth also surfaced in the most recent of her BBC columns. She said:

“I like watching Coco Gauff… and maybe this will become a special rivalry for years to come. [But] I feel like she’s been on tour longer than me and she’s only 18.”

Swiatek was Wimbledon junior champion in 2018, but Gauff won in Paris:

“I remember Coco winning the French Open juniors in 2018 when I really wanted to win. I didn’t play against her, because I lost to Caty McNally in the semi-finals. But when Coco won—she was only 14—I was like ‘great, I worked so hard and a girl three years younger than me is winning junior Grand Slams’! It was tough for teenage me to take, but I’ve progressed well since.”

And there it was: No matter the combination of youth and experience encapsulated by Swiatek, there was already a chasing pack, led by the even more precocious talent and remarkable maturity of Gauff.

Yes, the Pole had beaten the young American in their two senior tour matches, one on hard courts, one on clay. But still only 18 years old, Gauff had won her first title three years ago in Linz, won again on the clay of Parma last year, and was building a yet stronger resume in doubles. She was women’s doubles runner-up at the US Open last year, and had made the final in Roland Garros this week, too. It was all contributing to another athletic competitor, willing and able to cover all parts of the court, and also with a calm confidence beyond her years.

Gauff made her first Major quarter-final exactly a year ago in Paris, and this year, she was yet to drop a set. Indeed, she had spent less time on court in singles than Swiatek—both taking under nine hours for six matches.

Already assured of reaching No13 in the ranks, victory over her potential long-term rival would take Gauff inside the top 10.

So much at stake, then, for the two women who made up the youngest singles final at Roland Garros since 1997—a combined 39 years.

Gauff opened proceedings, and the nerves were palpable: a double fault among three errors contributed to a quick break by Swiatek.

In the third game, Gauff did begin to find her range, made a handful of backhand winners, but faced five break points, ultimately beaten again after a seven-minute-plus game. A swift hold, and Swiatek led 4-0.

A huge cheer greeted a first hold by Gauff. She was finding more traction, looking more determined, but Swiatek was cranking up her own winners, and broke again for the set, 6-1, after 35 minutes.

However, Gauff’s focus and resilience were not swayed, and she began the second set with her first break chance. Four unforced errors from the former champion opened the door for the American’s first break. She held for 2-0, and the French fans were delighted.

It certainly seemed to galvanise the Pole: three winners to hold, a break back, and a love hold for 3-2. She broke again, though both women were ripping the ball, trying to play on the front foot, both at their best in a purple patch. Yet even so, Gauff could not hold off Swiatek. A backhand winner down the line, and the Pole led 5-2.

A clap of thunder accompanied some huge hitting as Swiatek served for the match, and while the nerves showed in her missed first serves, her powerful strikes drew one last error from Gauff and the title, 6-3.

With her youth surfacing at last, Gauff, sat with tears in her eyes, while Swiatek sprinted to her player box. It is one of the hardest, most lonely places in tennis—but Gauff will surely be the champion on this court very soon—as Swiatek told her during an emotional ceremony.

These two young women are going to light up their sport for many years to come, and that is very good news for fans of tennis.