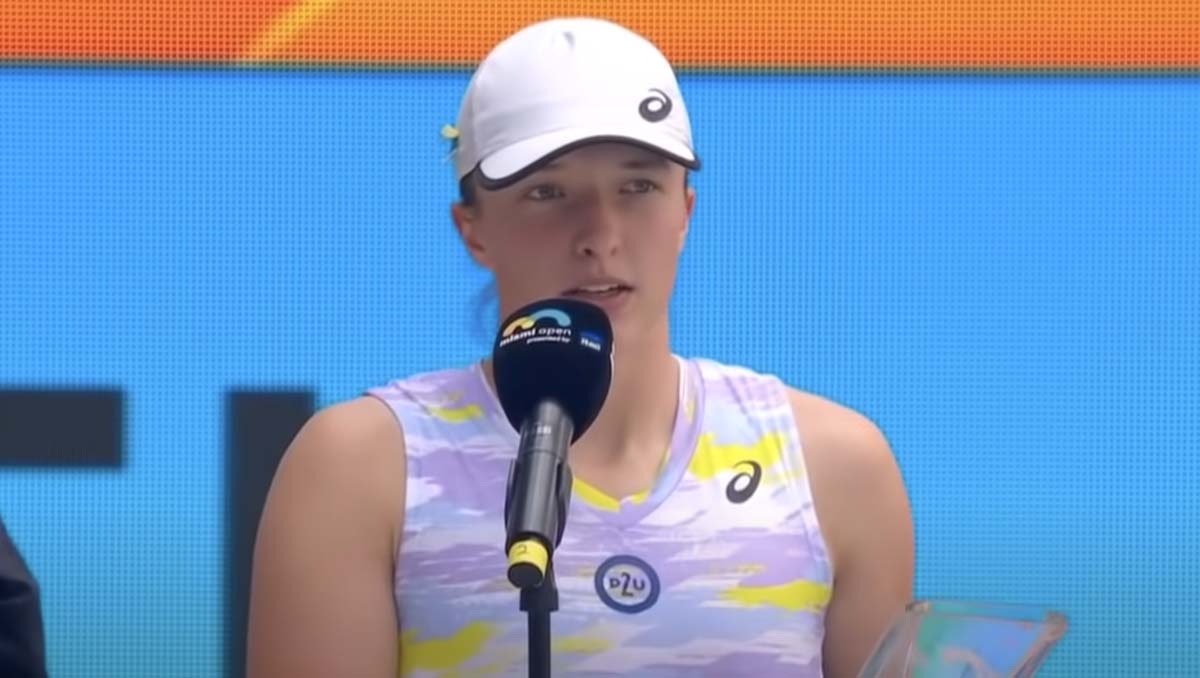 Almost since the end of the Australian swing, the 2022 women’s tennis season has been about one woman: Iga Swiatek.

Not that the Polish star had anything to be ashamed of Down Under: the semis at the Adelaide WTA500 and then at the Australian Open would be a good run by most players’ standards.

So yes, January was a strong start, but winning the 2020 French Open as a teenager in such dominant style had loaded up the expectations. Now, her growing mental resilience—thanks to the maturity to seek the help of a sports psychologist to boost her confidence—had dovetailed with her all-court skill and athleticism into the complete winning formula.

Come this February, come a streak of 33 wins, five titles—four of them back-to-back 1000s—and a tally of 42-3 for the year. She replaced the retired Ash Barty as No1 with the Miami title, and at this year’s Roland Garros, the wins and the stats continued to pile up.

She was the only top-10 player to make it to the last 16, and the only one of the five former champions in the draw to get past the second round. She had accumulated a Tour-leading 16 6-0 sets this year, and also led the tour in match-wins, title wins and in the fewest games dropped en route to a title, the Rome 1000.

And she only turned 21 two days ago.

Come the final four who took to Court Philippe Chatrier on semi-final Thursday, though, there was plenty to shout about for the other three women, too. For all of them, this would be their first Major semi-final.

From Swiatek’s next opponent, Russian Daria Kasatkina, seeded 20, there were threats aplenty. She was a former Roland Garros junior champion, had beaten the Pole last summer in Eastbourne, and was yet to drop a set in the tournament.

The Russian had also made her breakthrough as a teenager, when she won Charleston, and in 2018 scored her biggest results, still age just 21, to break the top 10. Then her form slipped, with her ranking, until the wins returned last season, and she arrived in Paris with a semi run at the Rome 1000.

No18 seed Coco Gauff, also a former junior champion, was the youngest semi-finalist, but a prodigious talent who was bidding to become the youngest finalist at Roland Garros in more than 20 years. Gauff, age just 18, had also come through without dropping a set, and even her unseeded opponents had been tough players, the likes of Kaia Kanepi and Sloane Stephens.

The youngest semi-finalist took on the unexpected name of Martina Trevisan, the only non-seed among the four, the woman who had lost around four years from her career with personal and injury problems, and had only won her first title ahead of Paris, the WTA250 in Rabat.

Italian Trevisan had emerged from a 16-woman section headed by Emma Raducanu, Angelique Kerber, Petra Kvitova and No6 seed Ons Jabeur. In the event, she did not face any of them, her first seed coming in the shape of Leylah Fernandez, who the 59-ranked Trevisan, now age 28, beat in a gutsy three-setter.

But first up was Swiatek, who laid out her ball-striking wares in the first game, three winners, and a hold. The second game, though, would be a marathon effort, almost seven minutes, that Kasatkina let slide with too many errors from a straightforward start to a break.

However the Russian’s range and variety of shots were already on display, a swinging serve, delicate drop-shot, acute angled forehand. So while, 10 minutes in, she was 0-2 down, she soon established her presence, took the ball early, forced a couple of errors from Swiatek, and broke back. This time, Kasatkina came through a five-minute hold: all square again at 2-2.

The conditions were tricky for both players, with the breeze getting up, and the sun at its most difficult height and angle for the server.

That aside, there were some fine rallies, but with the sun at her back, Swiatek got back her range and vision, held with three winners, and broke almost as swiftly, 4-2. She went on to break to love for the set, 6-2, in little more than half an hour, capping it with a flat backhand missile of a winner.

Kasatkina held her first service game in the second set, but that would be the limit. Swiatek seemed only to grow in confidence, making the nimble Russian look rushed, not just in her shot-making but her decision-making.

A love hold, a swift break, and the former champion was 3-1 up, and a replay took her to 5-1, with some pummelling return-of-serve winners. It was, then, a near formality as Swiatek took the balls to serve, and won four straight points for set and match, 6-1, closing it out with an ace.

It had taken a mere 64 minutes, had taken her to a second French Open final, and her 34th win in row.

There was very little to choose between Gauff and Trevisan at the start of the second semi, first with two long holds, then two breaks, 2-2. Both were making a lot of errors as they tried to take control with their aggressive tactics, and Gauff broke again.

There was certainly an air of tension on court between the two women: Trevisan’s vocal roar as she plays caused Gauff to complain, but the Italian seemed unfazed. And it was now the American’s turn to stack up errors, and yet another break after six and a half minutes took it back, 3-3.

Cue Gauff to go on a surge, while Trevisan made more errors. The American would drop just two more points, break twice, and take the set, 6-3.

The Italian then took a medical time out for a thigh injury. Between them, there had been 50 errors and not even 20 winners, and so it continued initially.

The third game became the decisive one in the match, almost a quarter of an hour and seven deuces in duration, and ended by a Gauff winner, 3-1. It infused the teenager with confidence, and after a love hold and another break, she served it out to love, 6-1, breaking out her front-of-court skills—and she made the doubles semis this year, too—to reach her first Major singles final.

She has met Swiatek twice before, losing in Miami in March and in Rome a year ago. But both women continue to move onwards and upwards in their tennis education and in self-belief. It could be a classic.