Last year’s Wimbledon semi-finalist to be seeded No7 this year; Wimbledon 2021 runner-up Berrettini defends Queen’s title; will be No8 seed in SW19 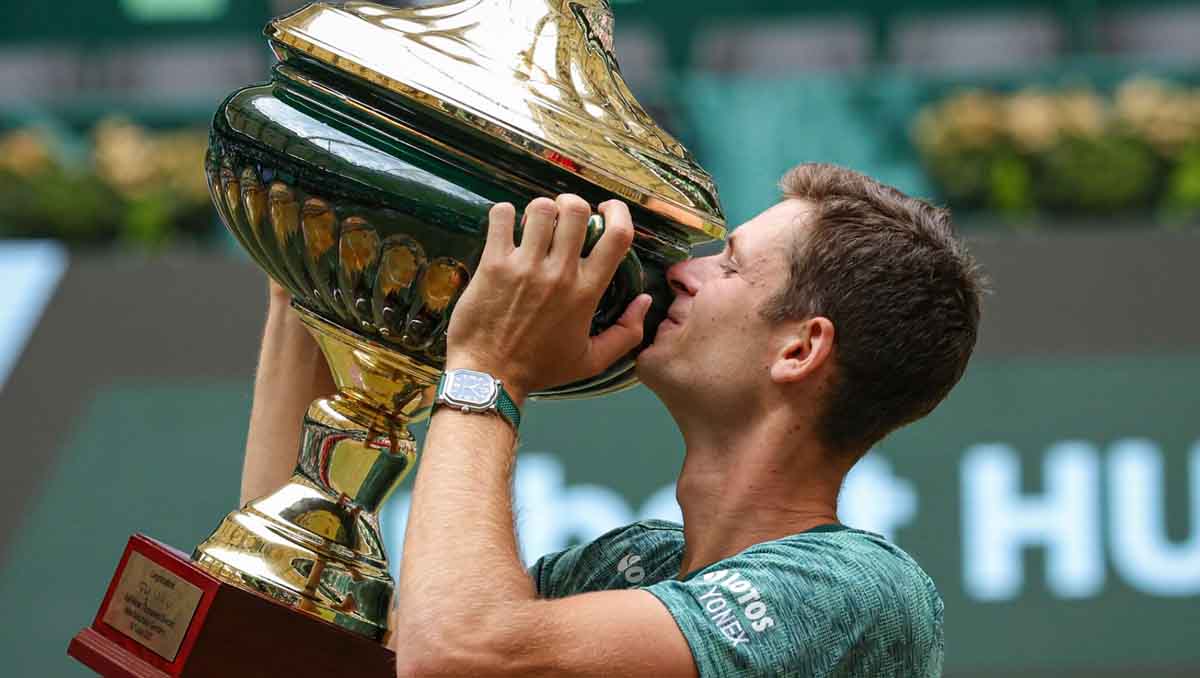 The tall, quietly-spoken and modest Pole, Hubert Hurkacz, not only claimed his first ever grass title in Halle on Sunday afternoon, and his first ATP500 title to boot, but he beat the world No1 Daniil Medvedev to do so.

The 25-year-old world No12 took little more than an hour to race past the top seed, 6-1, 6-4, having come through one of the toughest segments of the draw to also beat No4 seed Felix Auger-Aliassime in two tie-breaks, then an on-fire Nick Kyrgios in a three-setter that also included two tie-breaks. And in beating Medvedev to claim the fifth title of his career, Hurkacz broke the world No1 three times but did not face a single break point.

For Medvedev, it was his second loss in a final in as many weeks after he lost out to Tim

van Rijthoven in the title match in ‘s-Hertongenbosch.

And while Hurkacz won the Miami Masters last year, the timing of this ATP500 win could hardly be better. After losing his opener on grass this year in Stuttgart, he has now played himself into contention for another strong run at Wimbledon, where he was a semi-finalist last year.

As he said after his impressive victory over Medvedev:

“Now I also go to Wimbledon with a lot of self-confidence. Grass tennis is something very special for me.

“It’s an incredible feeling. I am totally happy and relieved. The atmosphere in the arena was fantastic, the tournament is just a lot of fun.”

He has risen two places in the ranks to No10, but also now knows that he will be seeded No7 at Wimbledon—so will not face a higher ranked player until at least the quarter-finals.

This time last year, he was ranked 17, but beat both Medvedev and Roger Federer before losing to Matteo Berrettini in the semis.

The Italian Berrettini, incidentally, will this year be seeded just one place below the Pole at Wimbledon, at No8, after defending his Queen’s title on the same afternoon.

The Italian, who missed three months prior to the grass season after having hand surgery, has hit the turf running with his classic big-serving, powerful and attacking game. He won the Stuttgart title last week over Andy Murray, and today beat Filip Krajinovic, 7-5, 6-4, to win his seventh title and his fourth on grass.

It was a victory that took Berrettini to 32-6 on grass overall, having won 20 of his past 21 matches on the surface, and certainly into serious contention for another final run at the All England Club—perhaps even one step further.

As for Medvedev in Halle, he apologised to the fans on Centre Court for the “unfortunately much too short final.”

“I would have liked it to be more exciting and last longer, even with the better end for me. But today just wasn’t my day. However, I also have to pay Hubert a big compliment. He practically didn’t allow anything, he was always wide awake when it counted.”

Medvedev now heads to Mallorca for the final ATP250 event before Wimbledon, and is again top seed. He has, it seems, decided to add whatever points he can through the short grass swing to consolidate his No1 ranking, because his Russian nationality prevents him from playing at Wimbledon.