Manchester United have had an opening bid for Frenkie De Jong rejected by FC Barcelona – and the midfielder is “still waiting” to make a decision about his future, according to Italian reporter Fabrizio Romano.

The Red Devils have been strongly linked with a move for the midfielder in recent days as Erik ten Hag sets about bolstering his squad at Old Trafford ahead of his first season in charge.

According to Italian journalist Romano, Manchester United have now had an opening offer – believed to be in the region of €60m plus €10m in add-ons – rejected by FC Barcelona for the former Ajax star.

However, the two clubs are still “in contact” about a possible deal for De Jong as Manchester United look to land their first major signing of the summer transfer window.

Romano also claims that despite suggestions to the contrary, De Jong has not communicated his desire to anyone and the player himself is “still waiting” to make a concrete decision about his future.

Posting on his personal Twitter account, Romano said: “Manchester United have made an opening proposal for Frenkie de Jong after talks started June 1. €60m plus €10m [in] add-ons.

“Barcelona have turned down this opening bid – but clubs remain in contact.

“De Jong has never indicated his desire to anyone. He’s still waiting.” 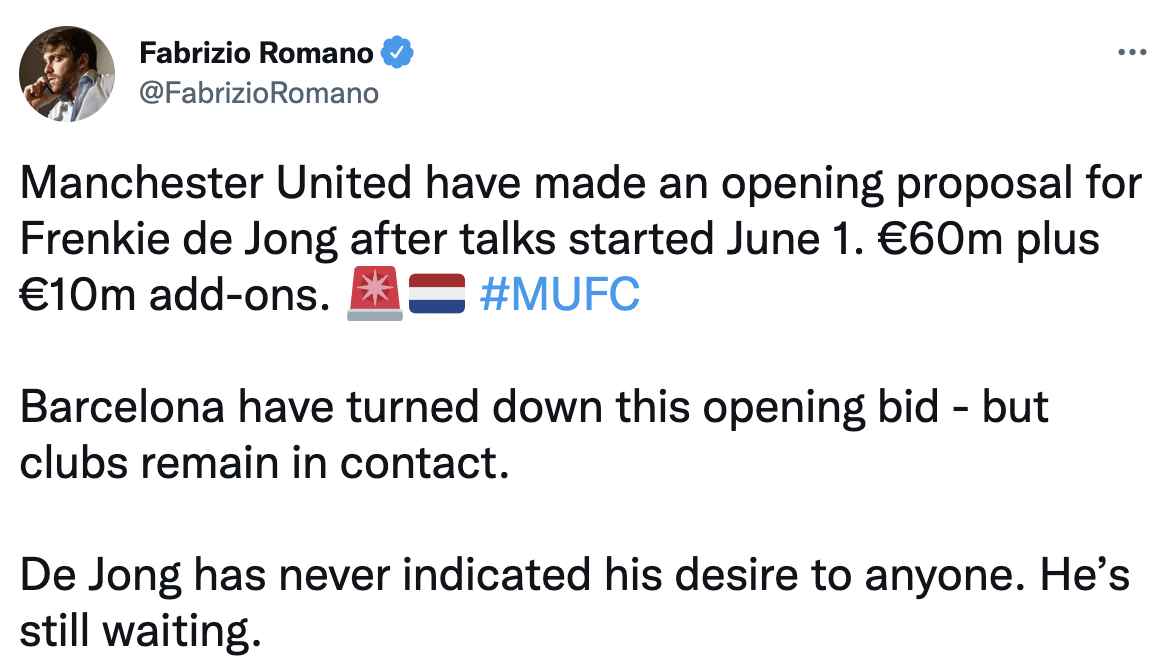 The 25-year-old De Jong was a constant presence in the FC Barcelona team last season as he scored three goals and made three assists in 32 La Liga games for the Spanish side. He also netted one goal and made two assists in 12 European games for FC Barcelona last term.

In total, De Jong has scored 13 goals in 140 games for FC Barcelona since joining the Spanish club from Ajax back in July 2019.