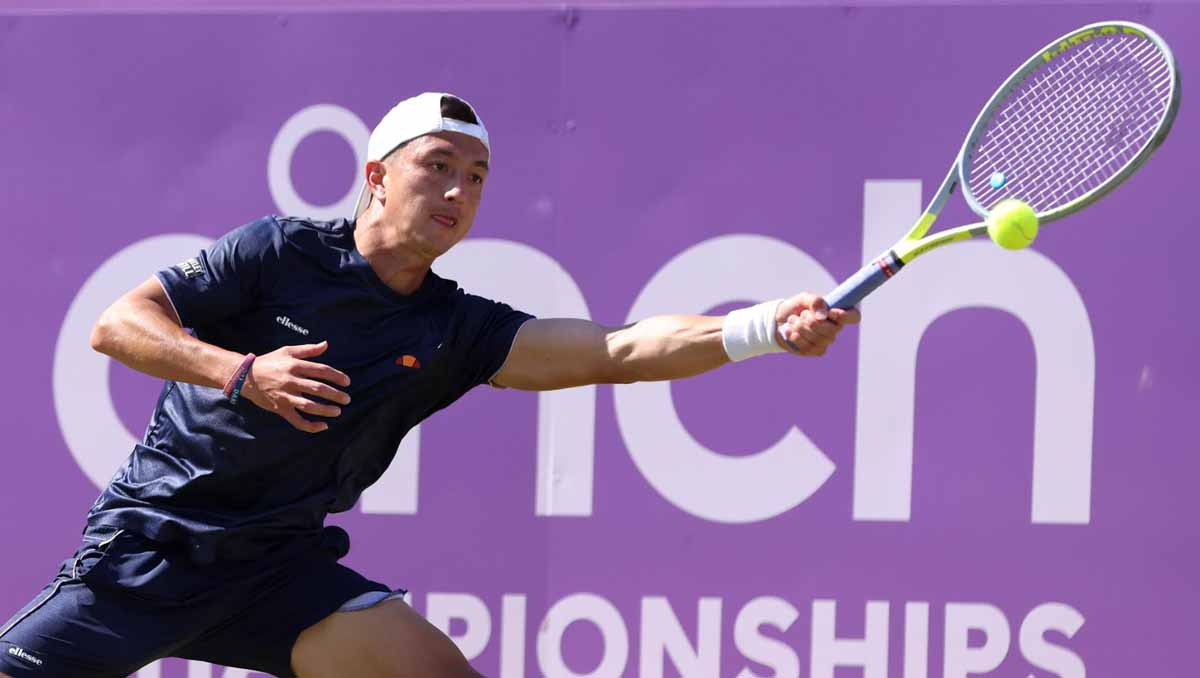 Casper Ruud, at the age of 23, had really made his mark since the tennis tour returned to some kind of normality after the coronavirus lockdown of 2020.

At last year’s Australian Open, he was ranked 28 and had one clay title picked up just as the global pandemic took a hold. But come 2021, come a run of five titles, four on clay.

The former junior No1 was on the way up at a rate of knots, boosted by three clay Masters semis, and three hard-court Masters quarter-finals. His fitness, speed, and work ethic were ensuring he was no one-trick pony, and having qualified for the ATP Finals last November—he made the semis—he this year scored his first Masters final, on Miami’s hard courts, then reached his first Major final at Roland Garros. He also picked up his seventh and eighth titles along the way—on clay, naturally.

By the time he switched to Queen’s grass this week, he had broken a new career-high of No5, and was thus the top seed at the famous club in the heart of London.

But if there was one surface where he was yet to prove himself, it was grass. He only ventured onto the green stuff for the first time last year, winning two matches from five played. So his debut Queen’s appearance would be a test, and a pointer to whether the Norwegian could live up to his top-five ranking come Wimbledon.

He opened against British wild card, Ryan Peniston, age 26, and also playing Queen’s for the first time. Indeed the Briton was making his main-tour debut after plying the Challenger circuit this season. But he had played a number of warm-up matches on grass, making the quarters in Surbiton and Nottingham, so he was quite at home on the grass by the time he faced Ruud.

The top seed opened proceedings, and it was a dangerous start, 0-40, before he finally held. Peniston, in reply, held to love, but Ruud began to find his way with two easy holds, moving more confidently, even moving forward—though his lack of experience at the net let him down more than once.

And Peniston, for all his 180 ranking, looked more than comfortable on the grass, held to love for 3-3, and naturally had plenty of support from the near-full centre court.

The Briton again worked break points in the ninth game with some aggressive corner-to-corner strikes, forcing Ruud to sprint the widths of the court, but with unusual caution. However, some pinpoint serving from Ruud kept him in the hunt, 5-4.

It was fascinating to watch the young star with no grass experience trying to work on new tactics and shots. Ruud was using twice as many sliced backhands as he had during the rest of the season, and was even throwing in some serve and volley plays, though his style around the net certainly needed work. He also had to try and adjust to the lower trajectory of the ball: He was netting too many backhands in particular.

He shook his head in frustration as another straightforward volley attempt found the net. But Peniston was making him work hard, and rushed him by racing to the net for considerably better volleying. The Briton resisted a first set point in a long hold to take it to a tie-break.

There, Peniston showed his grass proficiency with fast, attacking play, moving an ill-at-ease Ruud, and taking a 5-3 lead. The top seed was pressed back into defence as he saw a smash winner bring up two set points, and Peniston converted for the lead, 7-6(4). 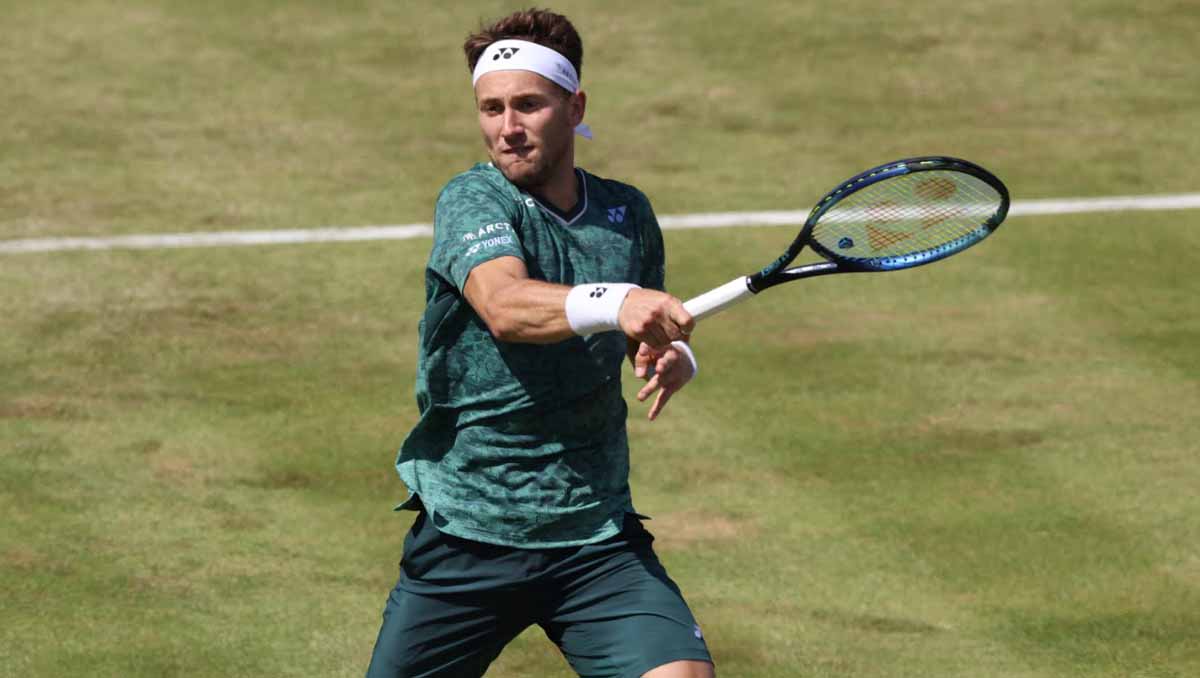 For Ruud, this was a steep learning curve, and an uncomfortable one for someone usually so strong in his movement and footwork. Here, he was unsure of himself, and had to call the physio to treat a hip pull after an earlier slip.

Ruud slipped again racing out to his forehand, but he threw in some changes of pace, drops and lobs, big serves and slice returns, to draw errors from Peniston and the first break. The big question was whether he could hold onto it—and his footing.

Now Ruud’s first serve let him down, and then a netted forehand brought up break-back point. Two more forehand errors—usually his best shot—created more chances, and Peniston took advantage: 4-4. Then the Briton aced a love hold, and Ruud stared defeat in the face.

Come a second tie-break, Peniston worked a 5-2 lead, repeatedly stranding Ruud in the wrong place. The Briton controlled the court, moving well, hitting the ball cleanly, thinking clearly—perhaps helped by whatever notes he had on a scruffy piece of paper in his bag. And finally, he took the biggest win of his career, 7-6(2), with alacrity, a man who clearly knew in his head and his feet how to use grass to his advantage.

He struggled to find words—it was, after all, his first match-win on the ATP tour, on one of his home nation’s biggest stages, and over the world No5. He said:

“It feels like a dream. I didn’t get much sleep last night… Four or five years ago, I was over there just watching, so I need a bit of time to process it.”

He next faces Argentine Francisco Cerundolo, ranked 46, who has also never played a tour match on grass: Prepare for more cheering.

For Ruud, for now, it is back to the drawing board and the practice courts, but two men who needed no coaching on how to play on grass came next, the defending champion and No2 seed Matteo Berrettini and Briton Dan Evans, the former direct from winning Stuttgart, the latter from winning the Nottingham Challenger.

They played one another on this very court last year, too, and the Italian won that quarter-final bout. He got first blood again, breaking to lead 5-3, and then stringing four huge serves to deny the break back and take the set, 6-3.

And Berrettini’s serving continued to dominate: He was averaging around 130mph on his first serve, and getting 80 percent of them into play. He broke at the start of second set, and hit a 14th ace to save a break back point, 3-1. Evans pressed hard in the eighth game, too, working four break points with his craft, angle, spin and change of direction, but to no avail. He would serve to save the match, 3-5, but after more than a quarter of an hour and four set points, the big Italian broke to win, 6-3.

Considering the Italian missed the entire clay season after needing hand surgery, his return to his most successful surface has already been impressive. But his very fine performance against Evans showed he was not here to make up the numbers. He will be the favourite to defend the title in a few days’ time.

More proof, if it was needed, that grass demands very different skills from clay, came in the shape of 2010 champion Sam Querrey, currently ranked 121, but the winner over No5 seed Diego Schwartzman, 6-1, 6-4. That made five seeds out at the first hurdle, after another former champion, Grigor Dimitrov beat top Briton Cam Norrie yesterday, Alex de Minaur beat Reilly Opelka, and Jack Draper put out Taylor Fritz.

Qualifier Paul Jubb lost an impressive battle against Dutch player Botic van de Zandschulp in three sets, leaving just two Britons in the draw after Andy Murray’s withdrawal at the start of the day. Peniston is joined in Round 2 by fellow wild card Jack Draper, who will next play Emil Ru