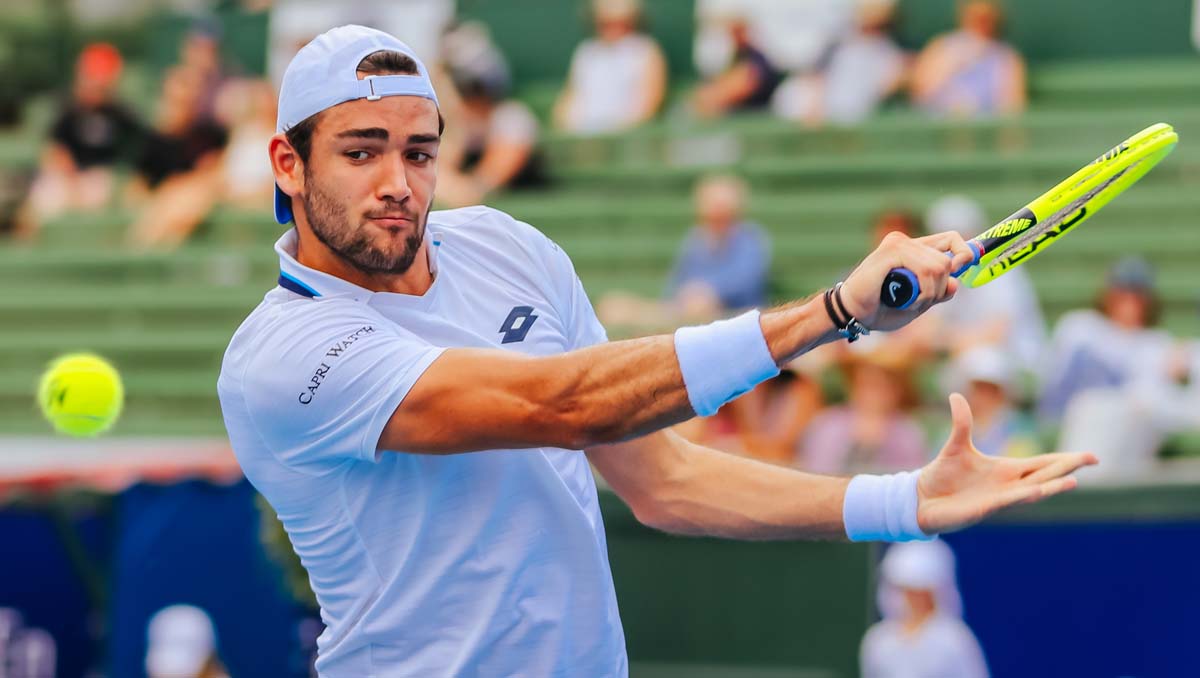 It is easy to forget just what an impression Italian Matteo Berrettini had made in the last 18 months or so.

Certainly he put his cards on the hard-court table in late 2019 when, at just turned 23, he made a breakthrough run to his first quarter-final and semi-final at the US Open, and backed it up with his first Masters semi in Shanghai: He had not gone beyond the second round at the 1000 level before.

But it was after the pandemic disrupted 2020 that the strapping 6ft 5in man with the film-star looks took his achievements to the next level. In 2021, he made the quarters of the French Open and US Open, the final of the Madrid Masters, and the final at Wimbledon, reasserting the grass-court credientials that had taken him to the Queen’s title just a fortnight before.

With a semi-final finish at this year’s Australian Open, he became the first Italian man to reach at least the quarters at all four Majors, and in his last four Majors, it had been the eventual champion—either Novak Djokovic or Rafael Nadal—who had beaten him.

But from a career-high No6 after Australia this year, he slipped to a current No10 after taking months out for surgery to his hand, missing clay altogether.

However, Queen’s was not his only previous grass title: He won in Stuttgart in 2019, and this week, after so long out of competition, he hit the turf as though he was never away.

As the No2 seed, he had avoided the unseeded pit-falls of men like Nick Kyrgios, Lorenzo Musetti and Andy Murray in the top half of the draw, and in fact made the final having faced just one seed, No6 Lorenzo Sonego. Even so, the Italian had rust to remove, needing two three-setters and then a two-tie-break battle in the semis to reach the title match.

And there he did face Murray, whose route had been considerably tougher, though negotiated with comparative ease. The former world No1, two-time Wimbledon champion and twice the winner of Olympic gold—one of those won on the grass of Wimbledon—had reached his 10th grass final via No7 seed Alexander Bublik, top seed Stefanos Tsitsipas, and the unpredictable Kyrgios, all without dropping a set.

It was proving to be a heart-warming return to grass form for Murray’s fans, and a confidence-boosting run for the man who had battled back from hip surgery, a pelvic injury, Covid infection, a groin injury and into his second final of the year, the 70th of his career. Now he was hoping to win his first title since the autumn of 2019—Antwerp—and his first on grass since the memorable 2016 season that delivered his last Wimbledon trophy.

It so happened that the last time Murray met Berrettini was during the Italian’s run to the title a year ago. Murray, who had been largely out of competition since February due to that groin injury, reached the second round, but was no match for the powerful Berrettini.

This time, perhaps, the tables would be turned: It was the Italian who was making his way back from a long absence, and Murray who looked the more prepared.

And the Briton started well, a clean hold, but he would face the first break points, and Berrettini thumped the ball to take a 2-1 lead. Murray immediately had break-back points, but four of them came and went as the Italian held, 3-1.

Murray had to come back from 0-40 in a long fifth game, too, but while his own serving improved, Berrettini had little trouble serving out the first set, 6-4.

Murray was not playing poorly, but Berrettini was producing the kind of tennis that won him Queen’s a year ago: big serves, effective one-two follow-ups at the net and with his cross-court forehand, and lots of deft slice shots.

It remained on an even keel up to 4-4, with a tie-break on the horizon, but now Murray three times had to save break points: He did so with a huge “C’mon” for 5-4, clenching his fist at the corner of British fans.

Then the set took a sudden turn, as Berrettini served to level for the tie-break, made a string of errors, and a swerving backhand from Murray broke to love for the set, 7-5. He roared “Let’s go!” to those same fans.

There was a brief hiatus as the Italian took a comfort break and Murray practised his serve, but there would be another more serious hold-up after Murray made a couple of errors, picked up a time violation, and Berrettini broke. Murray called for the trainer, who worked on the Briton’s left hip on court—worrying signs for the man who twice had undergone hip surgery and now played with a metal-coated joint.

He returned to hold for 1-2, but was limping, and Berrettini was not about to ease up on his serving, 3-1. The Briton increasingly came to the net, and held, but he had to get a break to survive, and instead needed again to stop mid-game for more treatment, perhaps to an abdominal strain.

Certainly his serve, when he resumed, was weak, but the Italian could not take advantage, firing long: Difficult for Berrettini to maintain his own focus and rhythm, too. Indeed the Italian could have closed things out faster, but finally in a long ninth game, he converted his second match-point in a disappointing end to what had been a fascinating encounter between two fine grass-court players, 6-3.

Where Murray goes from here is not clear, though he is scheduled to play Queen’s this coming week, where he could play Berrettini in the second round—but both men are in a tough quarter that contains unseeded Stan Wawrinka and Frances Tiafoe, plus Denis Shapovalov.

Murray will break into the top 50 for the first time in four years, but that will not be front and foremost right now.

While Stuttgart served up one high-quality final, its sister event across the border in the Netherlands at ‘S-Hertogenbosch had already delivered a final worthy of its history and popularity. After a three-year absence—Covid closure, followed by a land-grab by Roland Garros last year—the title match brought a Major champion in Daniil Medvedev, who was set to become No1 again next week, against a Dutch player who had lit up his home tournament with his powerful grass tennis.

Tim van Rijthoven beat No3 seed Taylor Fritz and then No2 seed Felix Auger-Aliassime to score more wins this week than he had in his entire career. Now he was, from a ranking of 205, into his first ever final.

Medvedev was broken early, 0-2, but having worked break points, he had a nose bleed and needed urgent treatment. However he returned to court to complete the break.

Medvedev again fended off break chances to hold for 3-3, but the Dutchman, with strong home support, was right at home on the grass that so suited his big serving game, his one-handed back-hand slice, and his enthusiasm for net charging. He broke to take the set, 6-4, and opened the next with a love hold.

His tennis was near perfect, he broke, and held for 3-0. His demeanour was calm, his ball-striking big and clean, his grass tactics perfect to undermine the Russian’s strengths. Another break, 4-0, and a huge forehand winner took him to 5-0.

Medvedev fended off the attack to hold a long sixth game, but it looked like mission impossible. Sure enough, the Dutchman finished as he had started, with strong, bold tennis that belonged to a player ranked many places higher, 6-1, to claim a maiden title, against the imminent No1, and on home soil. It was, as many have now said, a fairytale.

While Medvedev rises to No1 come Monday, van Rijthoven will jump 99 places to a career-high 106. He will hope that Wimbledon rewards him in two weeks’ time with a wild card into its main draw.