Gareth Bale is a Welsh footballer currently at Real Madrid. Find out more about Gareth in our in-depth biography

The winger started his professional career at Southampton in 2007 following eight years progressing through their youth ranks.

Bale moved to Tottenham Hotspur in a £5m deal in 2007 but the Welshman didn’t flourish at White Hart Lane until 2010.

Bale moved to Real Madrid in what was a world record £85m move from Spurs in July 2013.

He has won three Champions League titles, the La Liga crowns and the Copa del Rey at The Bernabeu.

Bale has netted 29 times in 70 games for the Wales national team after he made his international debut in 2006.

Bale joined the Southampton Academy at the age of nine.

He became the second-youngest player to represent Southampton at the age of 16 years and 275 days when he made his debut in Southampton’s 2-0 win over Millwall in the Championship on 17 April 2006.

Gareth scored his first goal for the Saints in a 2-0 win against Derby County at Pride Park on 6 August.

He won the Carwyn James Award for the BBC Wales Young Sports Personality of the Year after a return of five goals before the end of December 2006.

Bale’s final game in a playoff game against Derby in May 2006.

He scored five times in 46 games for Southampton. 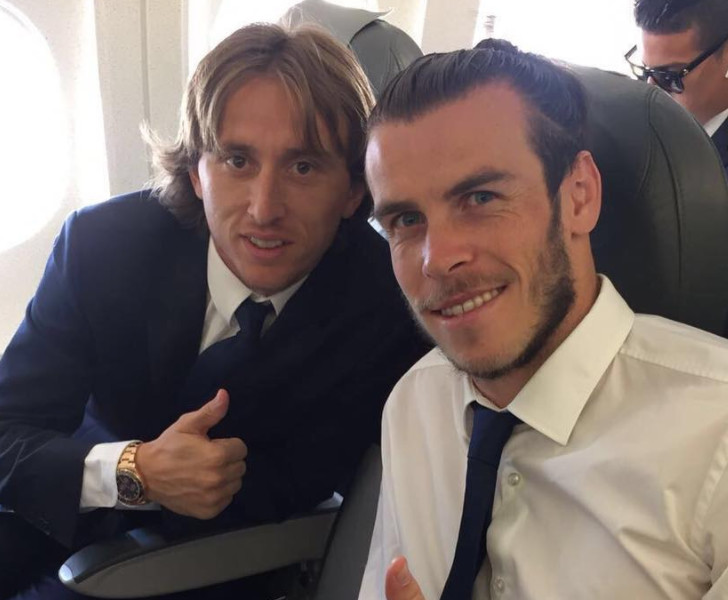 The Welsh star made his Spurs debut in a 1-0 loss to Manchester United at Old Trafford in August 2007.

Gareth netted his first goal in a 3-3 draw with Fulham on 1 September 2007. 14 days later, Bale scored in his first north London derby after a 3-1 loss to Arsenal at White Hart Lane.

He netted his third goal in September in a 2-0 win over Middlesbrough in the League Cup.

Bale finished the 2007-08 season with two goals in 10 games in all competitions.

Gareth missed the start of the 2008-09 season due to ligament damage in his ankle.

The Welshman featured in Tottenham’s loss to Manchester United in the League Cup final in February 2009.

Bale finished an injury-hit season with two assists in 20 appearances.

Bale signed a four-year deal ahead of the 2009-10 season before he underwent a knee operation.

Bale returned to first-team action in a 5-0 win over Burnley at the end of September. It was the first time Gareth had played in a winning Tottenham team after a 24-game winless streak.

He scored the decisive goal in a 2-1 victory over Arsenal in the north London derby at White Hart Lane on 14 April 2010. A week later, the Welshman scored in a 2-1 win against Chelsea FC.

Gareth scored his third and final goal of the campaign in a 4-2 loss to Burnley.

Bale made a fine start to the season with two goals in a 2-1 victory over Stoke in August 2010.

He made all four assists in a 4-0 win over Young Boys to help Spurs reach the Champions League group stage.

Gareth opened his Champions League account with a goal in a 4-1 win over Dutch side FC Twente.

He produced an eye-catching display in Tottenham’s 4-3 loss to Inter Milan after he netted a hat-trick in their defeat at San Siro. Bale produced a man of the match performance in the return fixture as Spurs were 3-1 winners against Inter.

Gareth scored in a 3-2 win over Arsenal in the north London derby at The Emirates in November 2010.

He finished what many consider his breakthrough season with 11 goals and three assists in 39 games in the Premier League and the Champions League.

Bale won the PFA player of the year award for his performances.

Bale scored his first goal of the new campaign in a 2-1 win at Wigan at the end of September.

He made a prolific start to the season after a return of five goals by the start of December 2011.

Gareth produced one of his best performances of the season with two goals in a 2-1 win at Norwich City on 27 December.

He scored 12 times and made 14 assists in 37 games across four different competitions.

Bale scored in Tottenham’s 3-2 win at Manchester United in August 2012 to help Spurs win at Old Trafford for the first time since 2013.

Gareth continued his excellent record in north London derbies with a goal in a 5-2 win against Arsenal.

He scored his first Premier League hat-trick in a 4-0 win over Bolton on Boxing Day to take his tally to nine goals.

Bale netted 11 times in February and March to prompt talk of interest from Manchester United and Real Madrid.

Gareth scored four times in his last six games of the season to finish the 2012-13 campaign with 26 goals and 10 assists in all competitions. 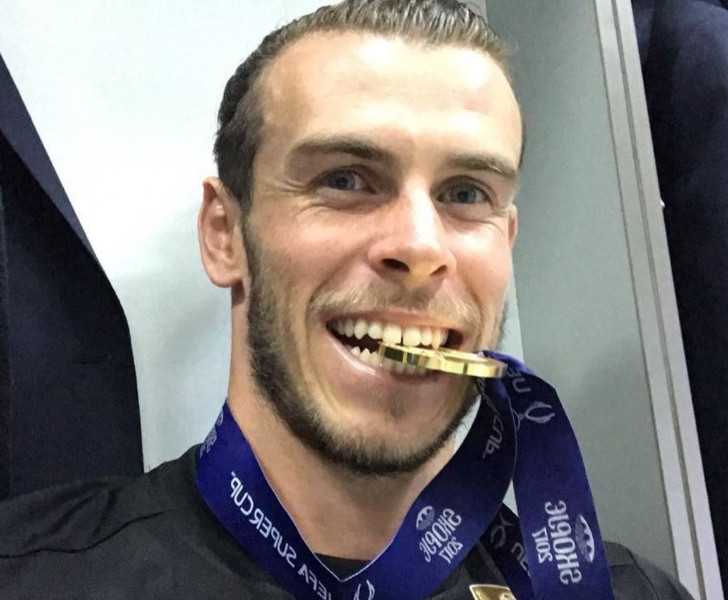 Real Madrid made Bale the most expensive player in the world after a £85.3m switch from Tottenham in 1 September 2013.

The Welshman was handed the number 11 shirt and Bale scored on his debut in a victory over Villarreal.

He made his first appearance in El Clasico in a 2-1 loss to Barcelona on 26 October 2013. Bale scored twice in a 7-3 win against Sevilla to make amends for the derby loss.

The former Spurs man scored his first hat-trick in a 4-0 win over Real Vallodid in La Liga on 30 November.

Gareth netted twice in a 6-1 win against Schalke 04 in the Champions League round of 16. He got on the score sheet in a 3-0 win over Borussia Dortmund in the last eight.

He netted a header in the 110th minute of Real Madrid’s 4-1 win against Atletico in the Champions League final to put los Blancos in the lead for the first time in the showpiece.

Bale scored 22 goals and made 14 assists in 44 appearances in his debut season at Madrid.

Bale won the Uefa Super Cup and the Fifa World Club Cup in his second campaign at Real Madrid.

He scored in a 3-0 win over San Lorenzo in the Fifa World Cup final.

Gareth scored 19 goals and made 10 assists in 49 games in five different competitions.

Bale opened his account with two goals in a 5-0 win over Real Betis on 29 August.

He netted four times in a game for the first time after a 10-2 victory over Rayo Vallecano in December.

Bale netted six times in four games at the start of 2016.

He struggled with injuries towards the end of the season but ended up with 20 goals and 14 assists.

He scored in their penalty shootout victory over Atletico Madrid in the Champions League final to win the competition for a second time. 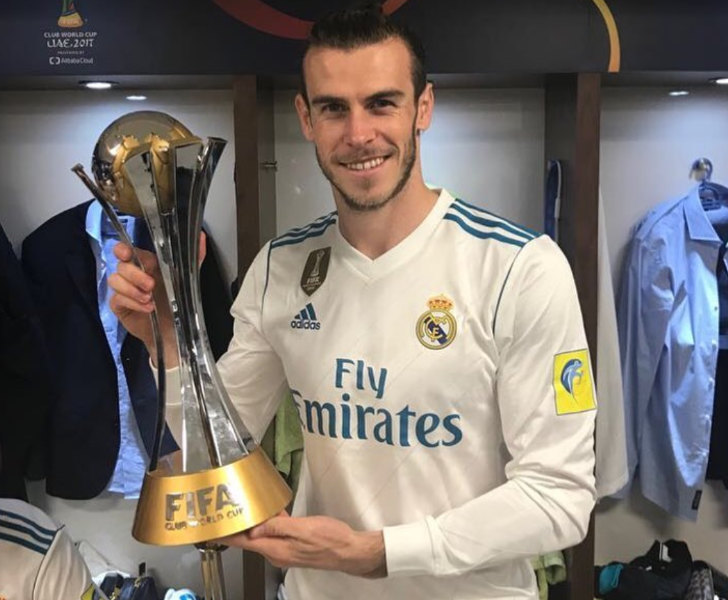 He netted seven times before Gareth suffered an ankle problem at the start of November.

Bale scored on his return to the Real Madrid team in a 2-0 win against Espanyol on 18 February.

He was limited to 27 appearances in the 2016-17 season which yielded a return of nine goals and three assists.

He was a late substitute in Real Madrid’s 4-1 win over Juventus in the Champions League final at the Millennium Stadium.

Bale won the La Liga title for the first time.

Gareth opened his account for the new campaign with a goal in a 3-0 win at Deportivo La Coruna. His next strike came in a 3-1 win at Real Sociedad.

Bale got on the score sheet with a stunning goal in a 3-1 win at Borussia Dortmund in the Champions League in September 2017.

The Wales international’s future at Real Madrid continued to be in doubt to prompt talk of a return to the Premier League with Manchester United.

He earned rave reviews for his impact from the bench in the Champions League final. Bale scored an incredible bicycle goal and a long-range strike in a 3-1 win against Liverpool FC. 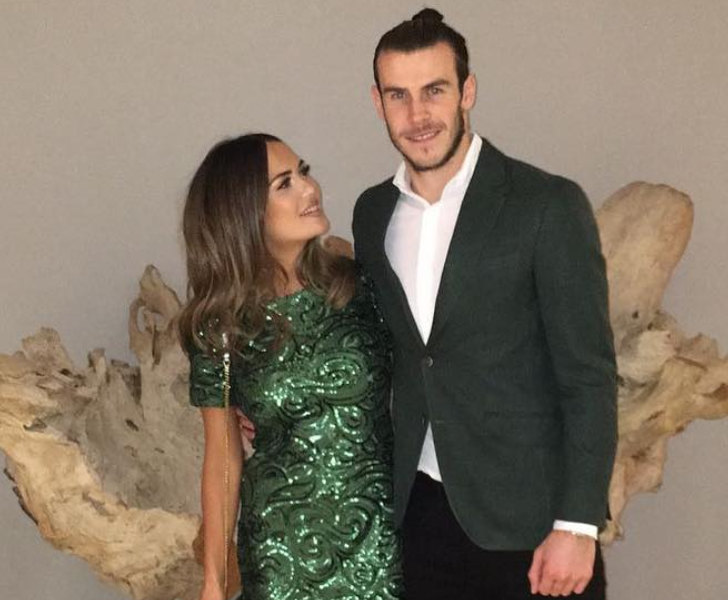 Bale made his Wales debut in a 2-1 win against Trinidad and Tobago in 2006.

At 16 years and 315 days, Bale became the youngest player to play for Wales.

He became Wales’ youngest-ever goal-scorer when netted a free-kick against Slovakia in October 2006.

He netted in Wales’ opening game against Slovakia in a 2-1 win. Gareth netted in their second fixture but the Welsh side lost 2-1 to England. However, the forward scored in a 3-0 win over Russia to help Chris Coleman’s side reach the knockout stage.

Bale became Wales’ record goal-scorer when he surpassed Ian Rush’s tally of 28 following a hat-trick against China on March 2018. 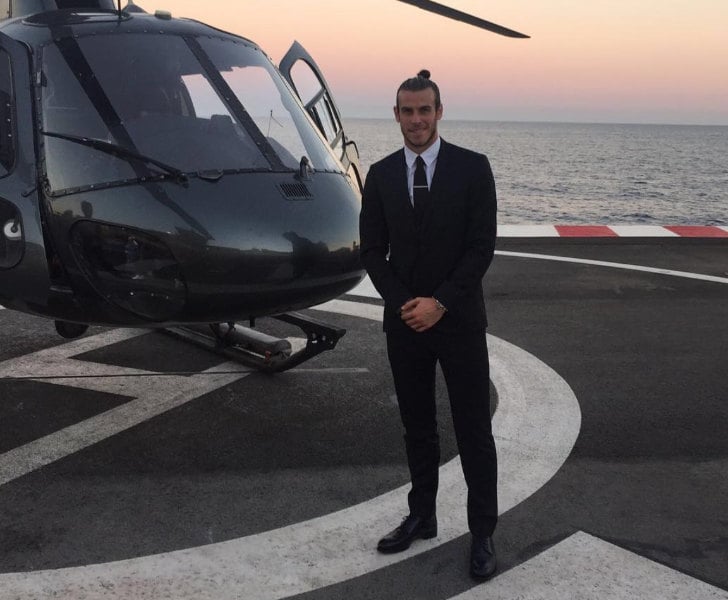 Bale is set to marry his long-term girlfriend Emma Rhys-Jones in 2018.

The couple have two daughters called Alba Violet and Nava Valentina, born in 2012 and 2016 respectively.

According to Forbes magazine, Bale is thought to be worth $34m (£24m).

• Bale went through a run of games over a two-year period, three managers and 1,533 minutes of football before he recorded his first win as a Spurs player.

• At 16 years and 315 days, Gareth became the youngest ever to play for Wales. The record has since been broken by Liverpool FC’s Harry Wilson.

• Gareth managed to record a time 11.4 seconds in the 100m sprint during his schooldays. Not bad considering Usain Bolt’s record is 9.58 seconds.

• Gareth doesn’t drink and doesn’t have any tattoos, going against trend in modern football.