Marcus Rashford is an English footballer currently at Man United. Find out more about Marcus in our in-depth biography

The English starlet made his Manchester United debut in a 5-1 Europa League win at Midtjylland in February 2015 under Louis van Gaal.

He scored two goals in his Premier League debut in a 3-2 win against bitter rivals Arsenal at Old Trafford three days after his Europa League bow.

Rashford has won the Europa League, the FA Cup and the League Cup during his fledgling Manchester United career so far.

The Red Devils striker scored on his England debut in a 1-0 victory over Australia at Wembley on 27 May 2016.

Rashford has netted two goals in 15 appearances for the England national team in his fledgling career.

Marcus joined the Manchester United academy at the age of seven. 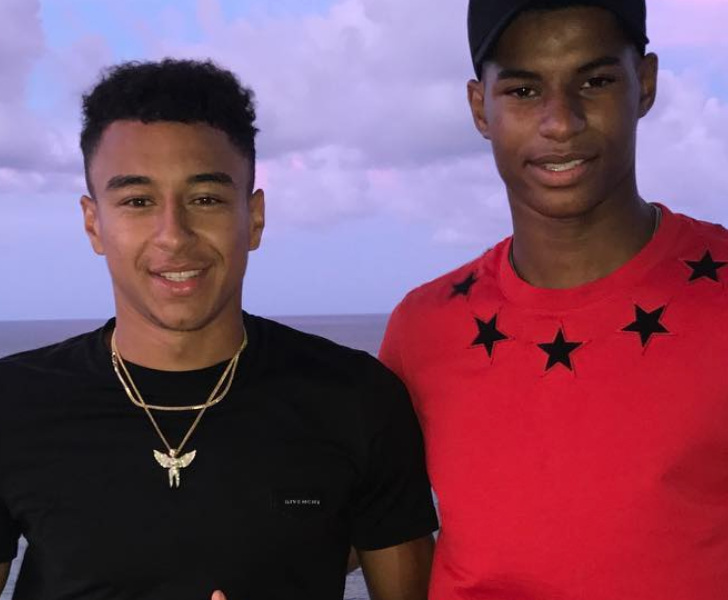 Rashford was included on the Manchester United bench for the first time for a 2-1 win against Watford at Vicarage Road in November 2015.

Anthony Martial’s injury in the warm-up resulted in Rashford being ushered into the starting line-up. Marcus seized his chance to impress with two goals in a 5-1 win against Midtjylland.

Three days later, Van Gaal handed Rashford his Premier League debut for the visit of Arsenal. Remarkably, the English striker scored twice in a 3-2 win against the Gunners to earn rave reviews.

The Manchester-born forward scored the winner in a 1-0 victory over bitter rivals Manchester City in his first derby at The Etihad in March 2017. He was the youngest-ever goal-scorer in the Manchester derby in the Premier League era.

He continued his fine form with a goal in a 2-1 win over West Ham to secure Manchester United’s place in the FA Cip semi-final.

Marcus won the Jimmy Murphy Young Player of the Year award after the striker scored eight goals in 18 appearances in all competitions.

The Manchester United youth graduate signed a new contract with the Red Devils on 20 May to extend his stay for a further season until 2020. 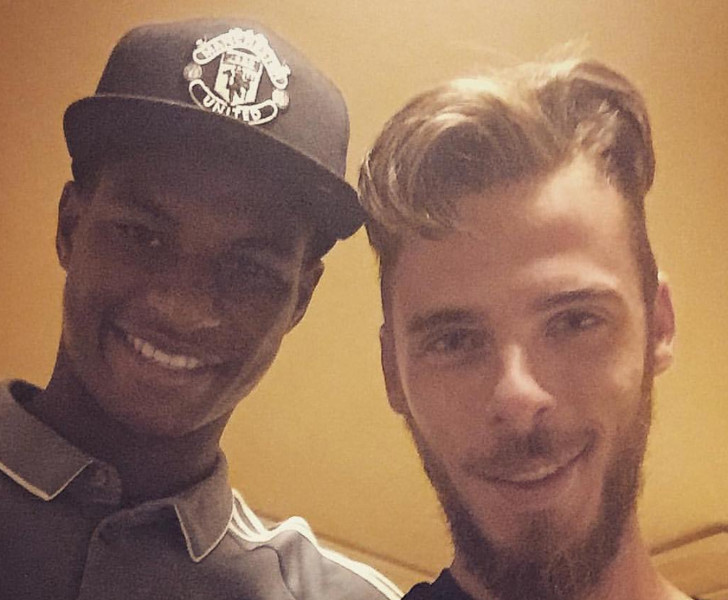 Jose Mourinho was appointed as Van Gaal’s successor in May 2016.

He was a second-half substitute in Manchester United’s 2-1 win against defending Premier League champions Leicester City in the Community Shield at Wembley.

Rashford wore the number 19 shirt for the 2016-17 season but started the first Premier League game of the new campaign on the bench.

Marcus came off the bench in the 71st minute to score an added-time winner in a 1-0 victory at Hull City in their third Premier League fixture.

He was a second-half substitute in a 1-0 loss to Manchester City in the derby at Old Trafford on 10 September.

Rashford made his first Premier League start of the season in a 3-1 loss at Watford. The centre-forward scored a consolation goal for the Red Devils at Vicarage Road.

Marcus continued his prolific form with goals in resounding victories over Northampton Town in the League Cup and Leicester City in the Premier League.

However, Rashford went on a 22-game goal drought before he finally found the net twice in a 4-0 win over Championship side Reading in the FA Cup third round.

He won his third piece of silverware as a Manchester United player when he came off the bench in a 3-2 victory over Southampton in the League Cup final.

Marcus continued his excellent record in the FA Cup with the winner over Blackburn Rovers at Ewood Park in the fourth round.

He produced one of his best performances of the season in a 2-0 win against champions elect Chelsea at Old Trafford.

Marcus scored a 107th minute winner in a 1-0 victory over Anderlecht to progress to the last four.

He netted a free-kick to secure a 1-0 away win at Spanish side Celta Vigo in first leg of their Europa League semi-final.

Rashford made an appearance in the final seven minutes of Manchester United’s 2-0 win against Dutch giants Ajax in the Europa League final.

The England striker finished the season with 11 goals and two assists in 54 games in all competitions. 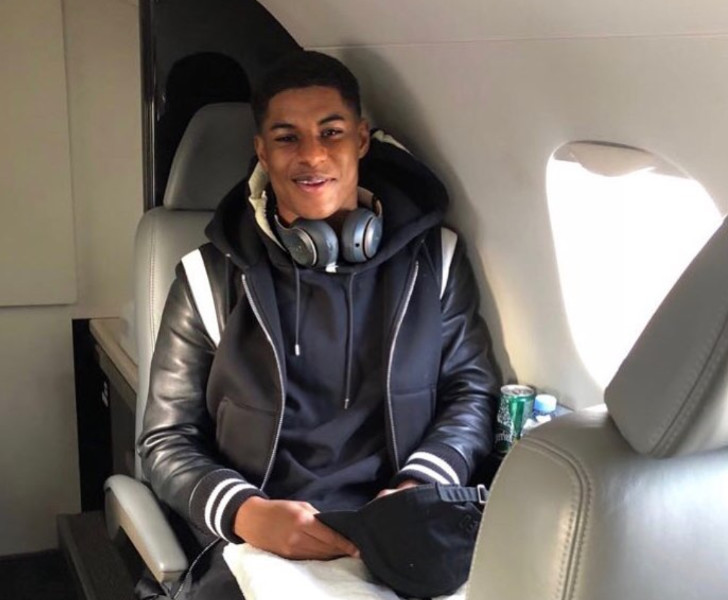 Marcus made his first appearance of the 2017-18 season as a second-half substitute in a 2-1 loss to Real Madrid in the Uefa Super Cup.

He opened his account for the new campaign after he came off the bench and found the net within three minutes of his introduction in a 2-0 victory over Leicester City.

The England international scored his third Champions League goal in a 3-0 win against Basel on 12 September.

Rashford netted twice in a 4-1 win at Burton Albion in the League Cup third round.

Continuing his excellent form in Europe, he scored his second Champions League goal of the 2017-18 campaign with the decisive strike in a 1-0 win at Benfica.

Marcus was on the score sheet wit a consolation strike in a 2-1 loss at Huddersfield Town as the Red Devils lost their first Premier League game.

He helped Manchester United to finish top of their Champions League group with a 2-1 victory over CSKA Moscow.

Rashford netted in his second Manchester derby in a 2-1 loss to Manchester City at Old Trafford.

His best performance of the campaign was against bitter rivals Liverpool FC after he netted twice in a 2-1 win at Old Trafford.

Rashford netted the winner in Manchester United’s 1-0 victory over Watford in their final Premier League fixture of the season. 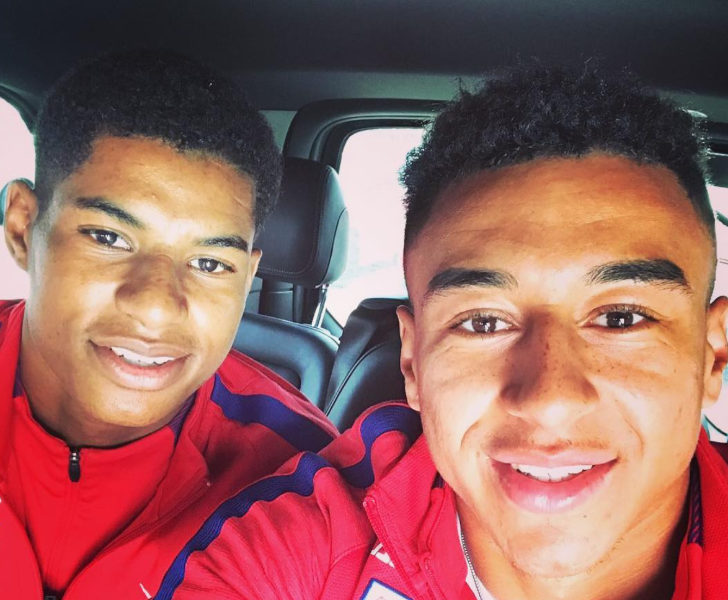 Rashford scored on his England debut in a 2-1 win against Australia at the Stadium of Light.

Marcus was included in Roy Hodgson’s England squad for Euro 2016. He was a second-half substitute in a 2-1 victory over Wales in the group stage.

In doing so, he became the youngest ever player to represent England at the European championships at the age of 18 years and 229 days after he broke Wayne Rooney’s 12-year record.

Rashford netted his second goal in England’s 2-1 win against Slovakia in their 2018 World Cup qualifier on 4 September 2017.

He made his World Cup debut against Belgium in the group stage.

Rashford played in goal during his first season at his boyhood club Fletcher Moss Rangers.

Marcus wrote a letter to his future self at the age of 11. It read:

“I hope that my future is very bright in and out of school, especially in my career as a footballer. I want to have a different lifestyle and make my family and others proud of me. I ONLY HAVE ONE AIM IN LIFE AND THAT IS TO BE A PROFESSIONAL FOOTBALLER, AND HOPEFULLY AT MANCHESTER UNITED.” 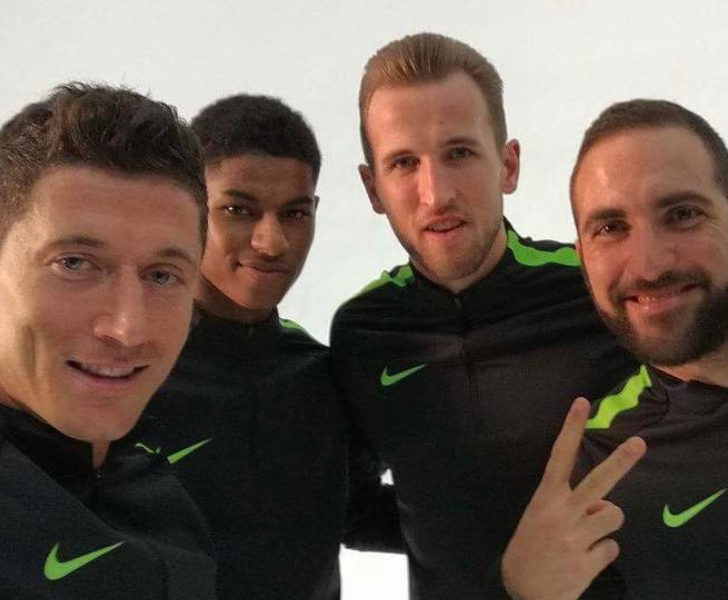 • Rashford initially earned £500 a week at Manchester United before a wage increase to £20,000 a week.