Mesut Ozil is a German footballer currently at Arsenal. Find out more about Mesut in our in-depth biography

Mesut Ozil is a German footballer who plays for Premier League club Arsenal.

Ozil is one of the biggest names in the Premier League following his move to Arsenal from Real Madrid in 2013.

The Germany international has won three FA Cup titles during his four seasons at The Emirates.

Ozil finished with the most assists in the 2015-16 Premier League campaign for Arsenal.

Mesut won the World Cup in 2014 after Germany beat Argentina in extra time to win the competition for a fourth time. 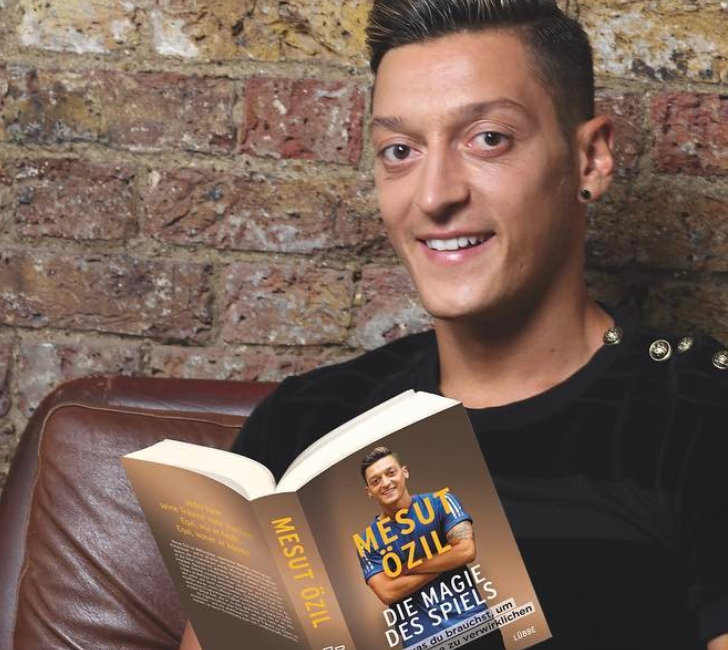 Ozil started his football career in the Gelsenkirchen area. He spent time at a number of youth clubs. The attacking midfielder was at Rot-Weiss Essen for five years.

Mesut was recruited for the Schalke 04 Academy in 2005. The 17-year-old playmaker wasted no time catching the attention of the German club’s hierarchy.

Ozil scored one goal in 16 appearances with the Bundesliga club in the 2007-08 season but the German teenager fell out with Schalke 04 over a contract offer.

Ozil completed a move to Werder Bremen in January 2008 after he turned down a €1.5m contract offer from Schalke 04.

Mesut signed a three-year deal with Werder Bremen after his new club agreed to meet his €5m valuation.

Ozil was handed the No11 shirt and scored his first Bundesliga goal before the conclusion of the 2007-08 season.

He scored Werder Bremen’s second goal in a win against Karlsruher SC to open his account in the German top flight.

Mesut finished the season at Werder Bremen with one goal and one assist in 14 appearances in all competitions.

Ozil started to make a name for himself in the Bundesliga during the 2008-09 season despite Werder Bremen’s mid-table struggles.

The No11 showed his penchant for an assist after he created 12 goals and netted three times in 28 appearances in the Bundesliga.

Ozil got his first taste of the Champions League and even created three goals for his team-mates in six appearances in Europe’s premier club competition.

Ozil was given more responsibility in the Werder Bremen team for the 2009-10 campaign after Brazilian playmaker Diego moved to Juventus.

He finished the season with 12 assists and scored nine times in 31 appearances. The talented midfielder made his mark in the Europa League with two goals and six assists.

Ozil’s impressive Bundesliga form earned him a place in Low’s Germany squad for the 2010 World Cup. 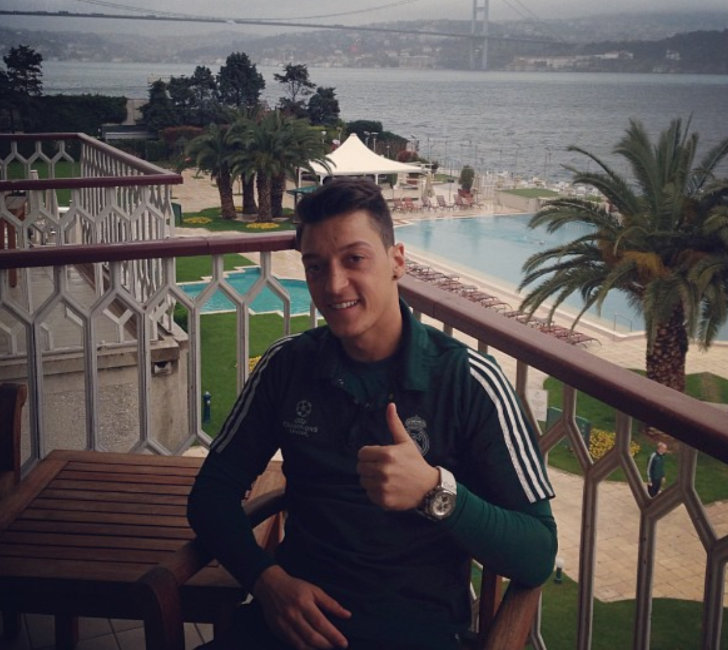 Mesut put himself in the shop window with some brilliant performance in a vibrant Germany side in the 2010 World Cup.

He profited from Kaka’s persistent injury problems at Real Madrid. Mesut made his La Liga debut as a second-half substitute for Angel di Maria in a 0-0 draw with Mallorca.

Ozil made his first assist on his Champions League debut for the European giants. He teed up Gonzalo Higuain to help los Blancos beat Dutch side Ajax.

Ozil finished his debut season in Spain with seven goals and 24 assists in all competitions.

He switched to the No10 shirt for the second season.

Ozil became a regular under Jose Mourinho at Real Madrid and he scored in El Clasico against Barcelona in the Spanish Super Cup.

However, the German midfielder’s elation was cut short after he was sent off in the second leg following a clash with Barcelona striker David Villa.

Mesut was part of Real Madrid history as Mourinho’s los Blancos team became the first side to reach 100 points in a La Liga season.

Ozil contended with increased competition for a starting spot at the start of the 2012-13 season following the arrival of Luka Modric from Tottenham Hotspur.

The German star was limited to 23 starts in the Spanish top flight in his third season at The Bernabeu. He did make a further nine appearances from the bench.

While Ozil found it more difficult to hold down a regular spot in Mourinho’s starting line-up, he still finished the season with 16 goals and 35 assists for club and country. 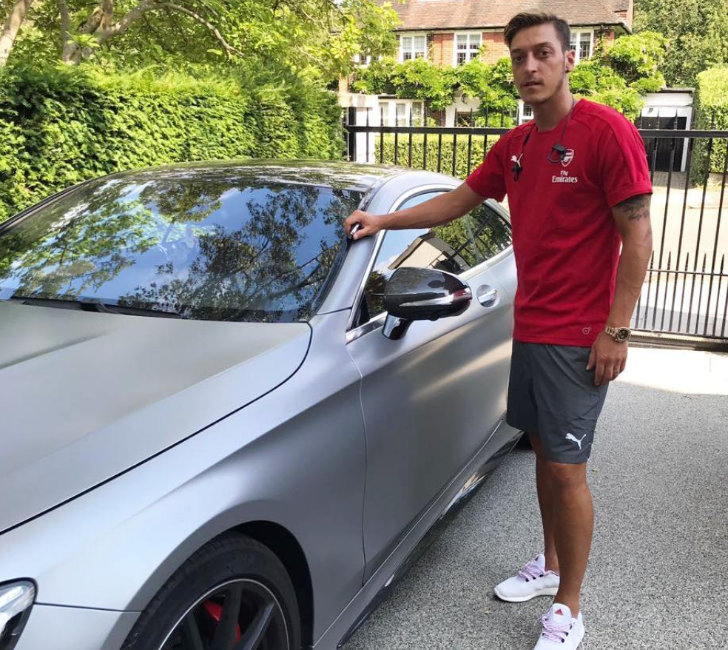 Arsenal managed to pull off a transfer coup on 2 September 2013 when Ozil agreed a club-record £42.5m switch from Real Madrid.

The Germany international signed a five-year deal with the north London club to ensure his stay until 2018.

Ozil was handed the No11 shirt as Jack Wilshere was the occupant of his preferred number 10.

Mesut made his Arsenal debut at the Stadium of Light and provided an assist for Olivier Giroud in a 3-1 win.

He further underlined his exciting ability with three assists in Arsenal’s 3-1 win against Stoke City to make him an instant hit with Gunners fans.

It didn’t take for Ozil to open his account with two goals in a 4-1 home win against Norwich City in October 2013.

The attacking midfielder added to his tally with efforts against Hull City and Everton before Arsenal suffered a chastening 6-3 loss to eventual champions Manchester City.

The Gunners reached the Champions League knockout stage but he missed a crucial penalty as Arsenal lost to Bayern Munich in the round of last 16.

A hamstring problem cut Ozil’s season short, although he returned in time to help Arsenal to a 3-2 win against Hull City in the FA Cup final at Wembley.

Mesut finished the season with seven goals and 14 assists in 39 appearances in all competitions throughout the 2013-14 campaign.

Ozil missed pre-season following his participation at the World Cup. Ozil, Lukas Podolski and Per Mertesacker were part of the Germany team that won the major tournament in Brazil.

He returned to help Arsenal beat Besiktas and secure their place in the Champions League group stage.

Ozil opened his account for the season with a goal and an assist in a 3-0 win against Aston Villa at Villa Park.

Mesut’s stop-start season continued when he suffered a knee problem that kept him sidelined until January 2015.

He returned to Arsenal’s starting line-up in the FA Cup and he scored the north London side’s second goal in a 3-2 win against Brighton and Hove Albion.

Ozil scored his first goal in the north London as Arsenal succumbed to a 2-1 loss to Tottenham Hotspur at White Hart Lane.

Arsenal finished the season on a high with a 4-1 victory over Liverpool as Ozil scored their second goal at The Emirates.

Mesut won the FA Cup for a second time after Arsenal were 4-0 winners against Aston Villa at Wembley.

He finished an injury-hit campaign with five goals and seven assists in 31 games in all competitions.

While his performances against some of the top teams attracted criticism since his move in 2013, Ozil scored and made an assist in a 3-0 win against Manchester United at The Emirates in September 2015.

Mesut continued his fine start to the campaign with two assists in a man of the match performance in a 3-0 win at Watford.

Ozil scored another big goal in a 2-0 win against Bayern Munich in the Champions League group stage as he made amends for his penalty miss in the round of last 16 the season before.

The German star was underlining his reputation as one of the Premier League’s top creative players with assists in six successive top-flight games after he supplied the pass for Kieran Gibbs’ goal in a 1-1 draw with Tottenham in the derby.

Unfortunately his celebrations on his 100th appearance for Arsenal were cut short after a 1-0 loss to Chelsea at The Emirates. It started a disappointing slump in the Premier League to lose ground on leaders Leicester City before he ended the north London side’s goal drought with the opener in a 2-0 victory over Bournemouth.

Ozil attracted criticism as Arsenal’s season started to unravel following a Champions League exit at the hands of Barcelona. He scored a consolation goal in a 3-2 loss to Manchester United.

Arsenal managed to sneak second spot in the table after Tottenham’s slipped up on the final day of the season. Ozil made his 19th assist of the Premier League campaign in a 4-0 win against Aston Villa to fall one short of Thierry Henry’s record of 20 assists in a season. 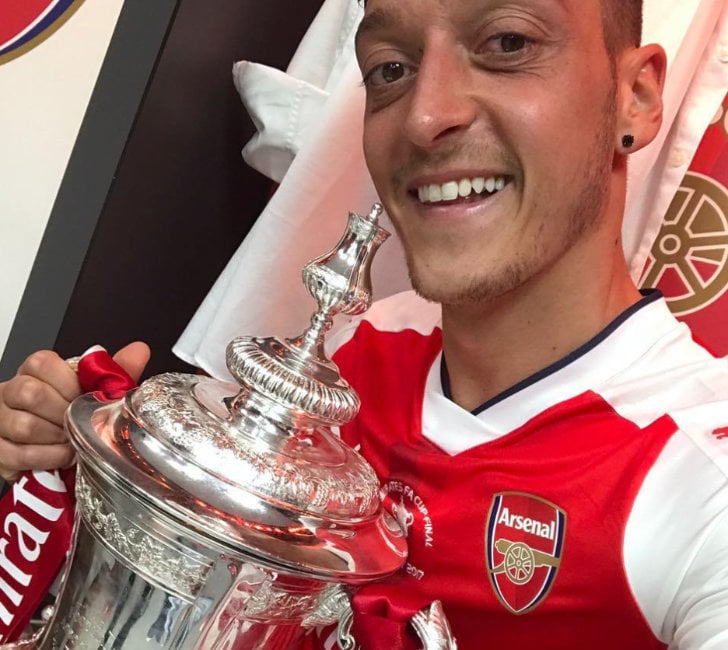 Mesut struggled with fitness issues at the start of 2016-17 following Germany’s Euro 2016 campaign.

He opened his account for the season in a 3-1 win at Watford in their second Premier League game.

Ozil was increasingly subjected to criticism throughout the season as he failed to reach an agreement with Arsenal over a new contract.

Indeed, his reported contract demands attracted criticism given his failure to fire Arsenal to an elusive Premier League title.

The Gunners suffered the ultimate humiliation in the Champions League following a 10-2 aggregate loss to Bayern Munich.

He won the FA Cup for the third time after a 2-1 win against Premier League champions Chelsea in the final.

Ozil finished the season with 12 goals and 13 assists in 41 appearances in all competitions.

The Arsenal midfielder entered the final 12 months of his contract at the start of the 2017-18 season.

Ozil was used sparingly in the opening months of the season amid talk of potential interest from Manchester United.

He scored his first goal of the season in a 5-2 win against Everton.

Mesut finished 2017 with goals against Huddersfield, Newcastle and Liverpool FC. He didn’t score again in the Premier League that season.

Ozil ended speculation surrounding his future when he signed a new long-term deal in February 2018. 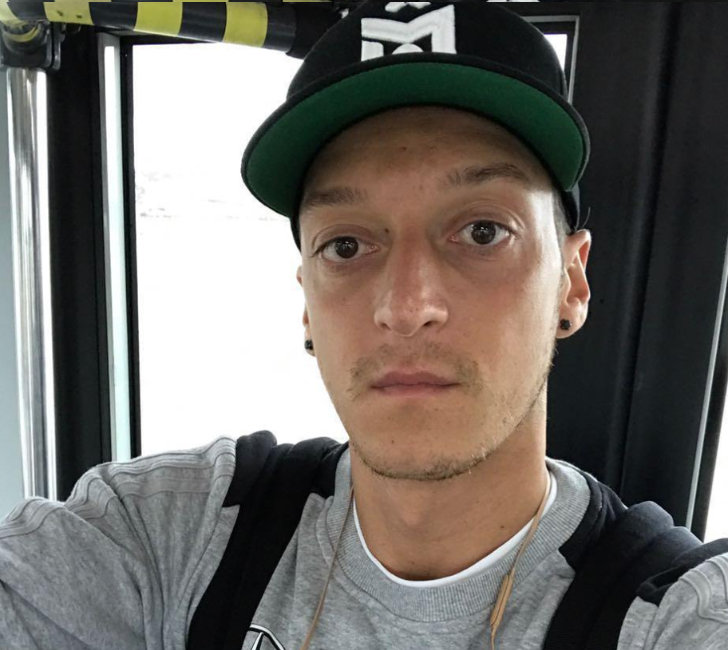 Ozil opted to represent Germany despite his Turkish heritage.

The Arsenal man produced a man of the match performance to help Germany beat England 1-0 in the Under-21 European championship final in 2009.

A few months earlier, Ozil made his debut for the German national team against Norway.

He established himself as an exciting talent during the 2010 World Cup. Mesut made three assists and scored one goal in the South Africa tournament before Germany lost in the semi-finals.

Ozil scored five goals during the Euro 2012 qualifying to help Germany reach the major tournament in Poland and Ukraine.

He proved to be on of the European championships’ top assist-makers as Low’s side reached the last four once again. However, his penalty couldn’t prevent Germany from suffering a 2-1 loss to Italy in the semi-finals.

Ozil scored the crucial winner in a 2-1 win against Algeria in the last 16 before he teed up Sami Khedira to score in their memorable 7-1 victory over Brazil in the last four.

He completed 120 minutes of the World Cup final in Brazil before Per Mertesacker replaced his Arsenal team-mate for the final seconds of their 1-0 extra-time win.

Ozil once again played a key role in Germany’s run to the Euro 2016 semi-finals before hosts France edged to a 2-0 win against the world champions.

He was critised for his poor performance in losses to Mexico and South Korea. 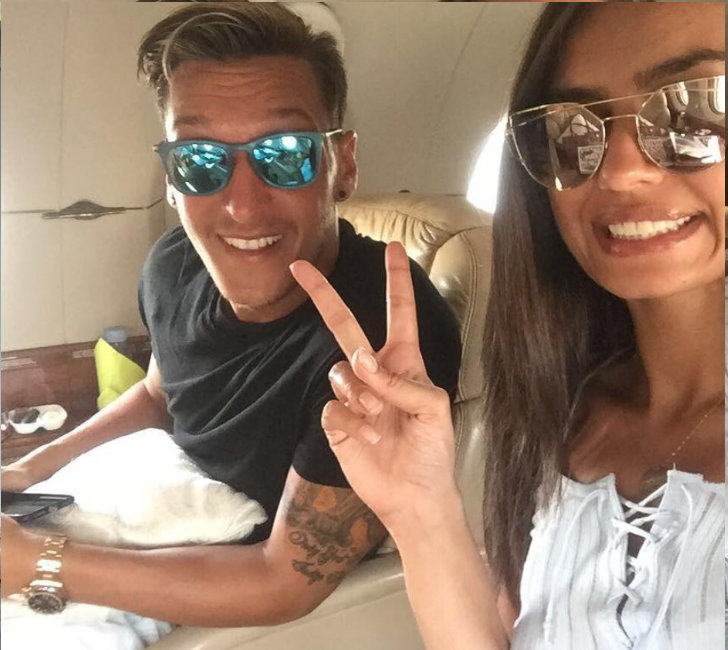 Ozil is third-generation Turkish-German. He credits both cultures with influencing his style of football.

Mesut is one of the Premier League’s many Muslim players. Indeed, the Arsenal star is reported to recite the Quran before every game.

Ozil’s private life has attracted some interest. He dated singer Mandy Capristo in an on-off relationship for three years. The pair finally broke up in 2016. 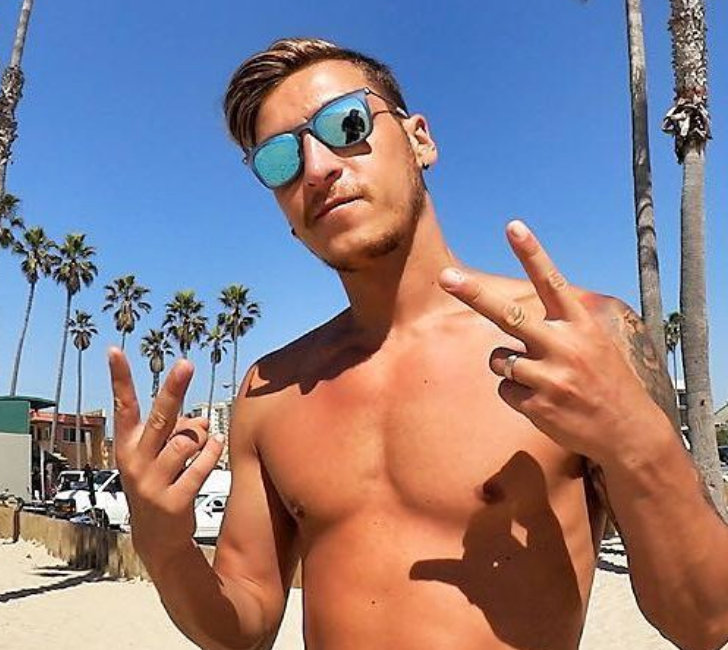 • Mesut has a black pug called Rocky Balboa who regularly features on his social media channels.

• Ozil donated his 2014 World Cup winnings, which was an estimated £240,000, to pay for 23 sick Brazilian children to have medical surgery. He explained the decision as a “personal thank you for the hospitality of the people of Brazil”.

• Ozil signed a sponsorship deal with German sportswear and equipment supplier Adidas in 2013.

• The Arsenal star visited Mecca in 2016 as Mesut allowed his social media followers some insight into his faith.

• His autobiography, The Magic of the Game / Gunning for Greatness, made headlines in 2017 after he shed light on his working relationship with Mourinho.