Thibaut Courtois is a Belgian footballer currently at Chelsea FC. Find out more about Thibaut in our in-depth biography 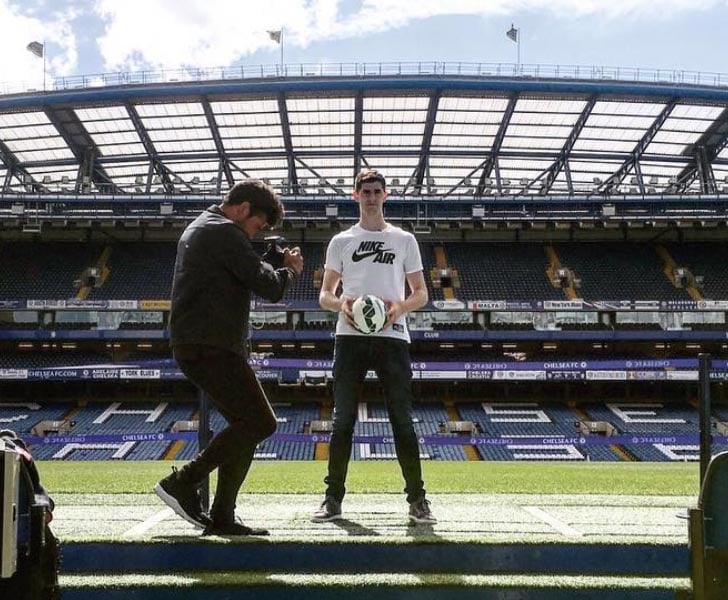 The 6ft 6ins goalkeeper started his professional career at Belgian club Genk in 2009.

Courtois moved to Chelsea FC in an £8m deal from Genk in the 2011 summer transfer window.

The Blues wasted no time loaning out Courtois to Atletico Madrid where he spent three seasons before returning to Stamford Bridge.

Thibaut established himself as Chelsea FC’s first-choice goalkeeper in 2014 and hasn’t looked back since.

Courtois made his Belgian debut in 2011 before firmly establishing himself as the Red Devils’ number one goalkeeper. 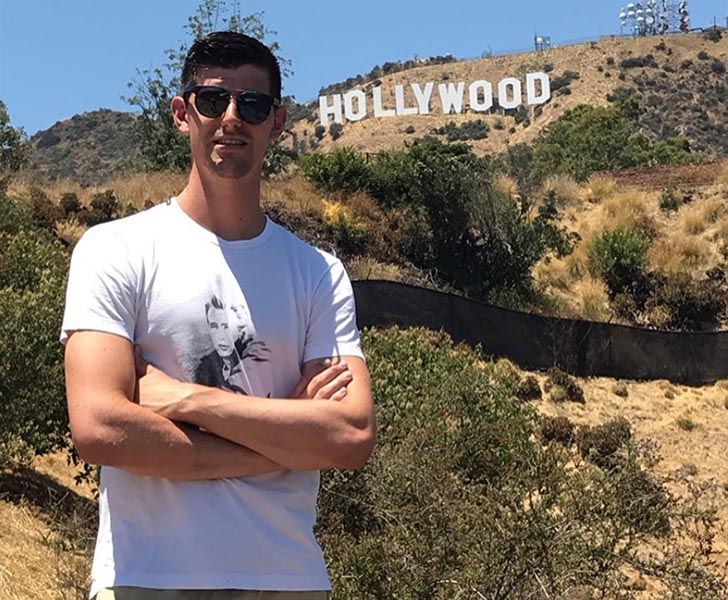 While Courtois is recognised as one of Europe’s best goalkeeper, Courtois began his career with local side Bilzen VV as a left-back.

He ended up playing as a goalkeeper after Thibaut moved to Genk at the age of seven.

He helped Genk to win the Belgian title in 2010-11. Thibaut ended up making 45 appearances for the club before he moved to Chelsea FC in a £9m deal in July 2011. 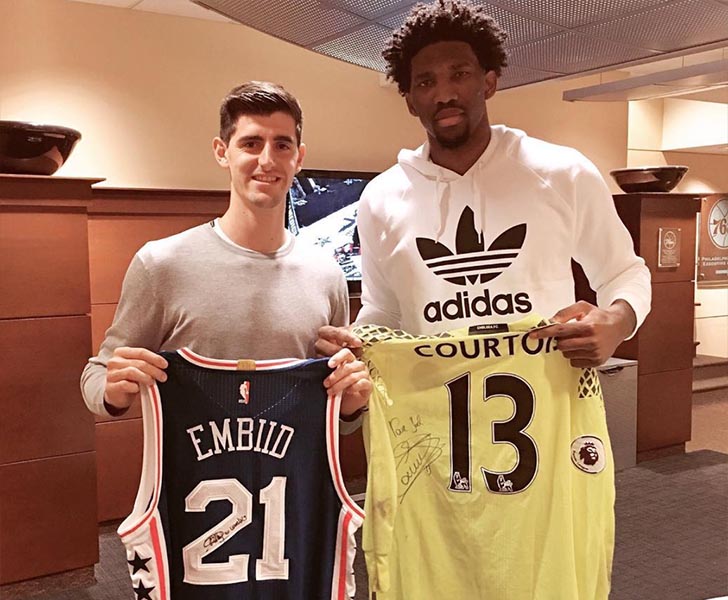 The Premier League club made the decision to loan Courtois out to Atletico Madrid after his arrival at Stamford Bridge.

Thibaut was tasked with filling the void left by David De Gea after Manchester United signed the shot stopper in an £18m deal.

Courtois made his debut for Atletico in a 4–0 UEFA Europa League victory over Vitória de Guimarães on 25 August.

He kept a clean sheet on his La Liga bow in a goalless draw with Osasuna at Vicente Calderon.

Courtois established himself as Atletico’s first-choice goalkeeper but received his first red card in a loss to Real Madrid in his first El Clasico.

Thibaut ended the season on a positive note after the goalkeeper helped los Rojiblancos to win the Europa League crown thanks to a 3-0 win against Athletic Bilbao.

Courtois extended his stay at Atletico Madrid for another season in July 2012.

The Belgian shot stopper helped Diego Simeone’s side to win the Uefa Super Cup after a 4-1 win over his parent club Chelsea FC.

Courtois set a new Atletico Madrid record when he managed to avoid conceding a goal for 820 minutes at the club’s home stadium Vicente Calderon.

Thibaut ended his second season at los Rojiblancos with another trophy after a 2-1 win against bitter rivals Real Madrid in the Copa del Rey final in May 2013.

The Belgian goalkeeper extended his loan stay for a third season ahead of the 2013-14 season.

Courtois was a key member of Atletico’s team that won the La Liga title for the first time since 1996.

He helped Atletico to concede just 26 goals in 38 games to finish three points ahead of Real Madrid in the title race.

Courtois was controversially selected to face Chelsea FC in the Champions League semi-finals. Atletico won 3-1 on aggregate to reach the final before a 4-1 loss to Real Madrid. 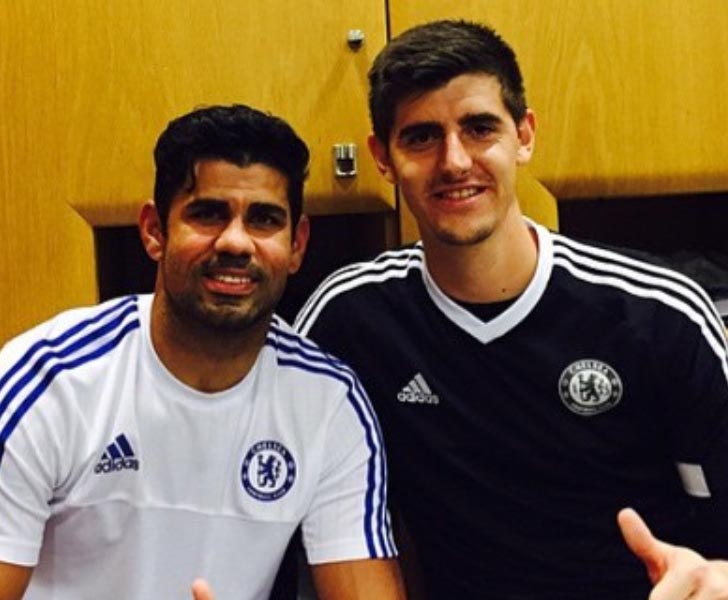 Thibaut returned to Chelsea FC in ther summr of 2014.

Jose Mourinho made the Belgium international his number one goalkeeper ahead of long-serving shot stopper Petr Cech.

Thibaut made his Chelsea FC debut in a 3-1 win against Burnley in their opening Premier League game of the season. A week later, he kept his first clean sheet as the club’s number one goalkeeper in a 2-0 win over Leicester City.

Courtois was widely hailed as one of the Premier League’s top goalkeepers alongside De Gea and Hugo Lloris. He was rewarded for his fine form with a new five-year contract in September 2014.

The Belgian shot stopper helped Chelsea FC to ease to a 2-0 win over Tottenham Hotspur in the League Cup final at Wembley.

Courtois finished the season with 74 saves in 32 games in the Premier League to help Chelsea FC get their hands on the title.

Thibaut made a disappointing start to his second season at Stamford Bridge following a 1-0 loss to Arsenal in the Community Shield before receiving a straight red card in a 3-1 defeat by Swansea in their season opener.

He was condemned to three months on the sidelines when he suffered a leg injury in early September.

Courtois made his return to the Chelsea FC team for their 1-0 loss to Bournemouth on 5 December before a 2-1 defeat at Leicester to result in Mourinho’s dismissal.

Thibaut earned his second red card of the season in Chelsea FC’s 3-0 loss to Manchester City at Stamford Bridge.

He finished the season with 66 saves in 23 starts in the Premier League.

Courtois remained as Chelsea FC’s first-choice goalkeeper following the appointment of Antonio Conte as the club’s new manager in summer of 2016.

He kept his first clean sheet in 13 attempts in Chelsea FC’s 3-0 win against Burnley in August 2016.

Thibaut was crucial throughout Chelsea FC’s 13-game winning run that allowed the Blues to build a commanding lead at the top of the table.

Courtois won his second Premier League title when the Blues were 1-0 winners at West Brom on 12 May 2017.

The Chelsea FC number one was linked with a potential move to Real Madrid in the 2017 summer transfer window.

Thibaut remained at the Blues for his fourth season at Stamford Bridge.

The Chelsea FC shot stopper made a strong start to the season despite the defending champions’ inconsistent form.

He helped Chelsea FC to reach the Champions League round of 16 after the Belgian goalkeeper made 15 saves in six group-stage fixtures.

He won the FA Cup for the first time thanks to Chelsea FC’s 1-0 win against Manchester United in May 2018.

Thibaut made his Belgium debut in a goalless draw with France at Stade de France. He was the youngest-ever goalkeeper to represent the Red Devils.

Courtois started the 2014 World Cup campaign as Marc Wilmots’ first-choice shot stopper. He played in every minute of Belgium’s run to the World Cup quarter-finals before an admirable 1-0 loss to runners-up Argentina.

He featured in every single minute of Belgium’s Euro 2016 qualifying campaign to help book their place in France before missing the final two qualifiers.

Courtois and Belgium reached the Euro 2016 last eight before a 2-0 loss to Wales.

Thibaut comes from a sporting family with a rich tradition in volleyball.

Courtois has a daughter and a son with his former Spanish girlfriend Marta Domínguez.

While the pair’s relationship has ended, her location in Madrid has fuelled speculation the Chelsea FC number one could return to the Spanish capital to be near his children. 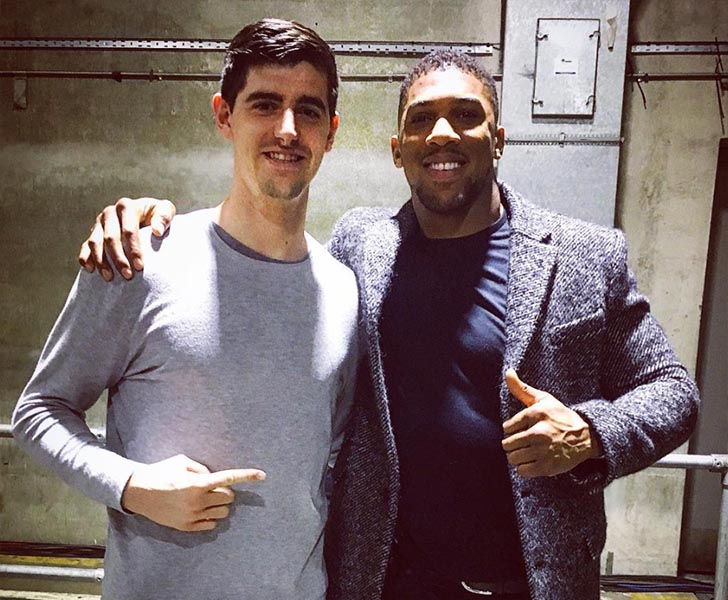 • Courtois was named Goalkeeper of the Year and Genk’s Player of the Year after keeping 14 clean sheets in 40 league matches in their title-winning season.

• In his opening 22 matches as an Atletico player, the Belgian kept 10 clean sheets.