2013 tennis best bits: We highlight the men, both new and familiar, who made great strides during the year 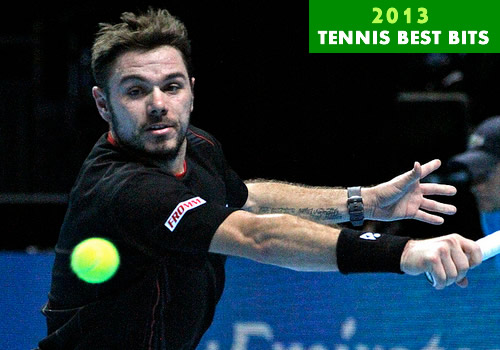 The first in a series of reviews of the 2013 tennis season, highlights the men, both new and familiar, who made great strides during the year.

At the start of 2013, there was one 22-year-old Canadian—tall, powerful, full of composure—in the top 100. What’s more, Milos Raonic was already at No15 and heading upwards.

But sitting just outside the 100 was another tall, athletic, attacking Canadian about to make his breakthrough. Vasek Pospisil, boasting a charismatic all-court game and one of the biggest smiles on the tour, had briefly broken the top 100 in 2012 with a series of Challenger titles, but he was knocked back by glandular fever, missing the 2013 Australian Open.

By the spring, though, he was back and making his mark in Challengers but it was his five-set loss to Mikhail Youzhny in the second round of Wimbledon that marked the start of something big, as he later confessed in Basel: “Around the time of Wimbledon, I felt I was starting to play really well, I was really very close to getting a top 20 player there in the second round. And that was when it kind of opened my eyes, but I was just trying to be patient and wait for a good tournament.”

He went on to reach the semis in Bogota and in the Montreal Masters, where he beat John Isner and his first top-10 opponent, Tomas Berdych. With a touch of irony, he faced Raonic for a place in the final, just losing out in a three-set thriller.

Then he beat Richard Gasquet in Shanghai, took David Ferrer to a third-set tie-break in Beijing and finally faced the biggest challenge so far: Roger Federer in the semis of the Swiss star’s home tournament in Basel. After first-set nerves, he fought back via a second set tie-break to finally lose 5-7 in the third. 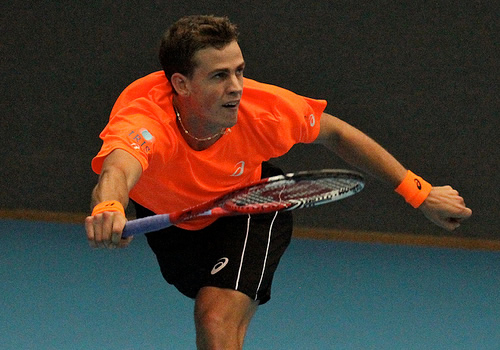 Vasek Pospisil in action at the Swiss Indoors in Basel (Photo: Marianne Bevis)

“We are trying to add a level of aggression into my game and play faster…I have always had it in me to play aggressively, but I tended to be more passive. We have worked really hard to try and take my game to opponents.”

Not only was the new approach successful, it won a growing body of fans enthused by his forward-moving game, his bounce and agility, and his infectious joy in playing.

He drew a weary line under his season with just one more match after Basel, but not before he said, almost apologetically: “I guess a really high goal, a great goal for me next year, would be to finish somewhere near the top 20… Maybe win my first title or something, but…it’s all process. All I can control is getting better every day.”

He will begin 2014 ranked 32 and, barring ill fortune, should be seeded for the first time in a Slam—the one he could not even play 10 months ago.

For a man who has spent his entire professional career in the substantial shadow of fellow Swiss Federer, Wawrinka has shown admirable drive and an impressive work ethic to finally earn his just reward. In 2013, with Magnus Norman in his corner and a self-belief that burgeoned alongside his winning ways, he just kept improving and kept breaking new ground.

Wawrinka has never wanted for ability, nor power, nor fans of his one-handed backhand—and his is one of the finest out there, a match-winner in its own right. But after taking up with Norman, Wawrinka’s tennis became more aggressive and forward-moving, his physical shape sharper and more durable, and that combination produced his best results since the first time he broke into the top 10 in 2008.

Having all but fallen from the top 30 last year, he edged back to No17 at the start of this year and took the Australian Open by storm in one of the matches of the tournament, almost putting out the defending champion Novak Djokovic. The Swiss fell just short, 10-12 in the fifth set.

He went on to reach his first Masters final since his 2008 run, in Madrid, and followed it with a quarter finish at Roland Garros, beating Gasquet 8-6 in the fifth set. Come the US Open, he shone again, reaching his first Grand Slam semi by beating Andy Murray in a sizzlingdisplay of attacking tennis, and then pushed Djokovic to the limit, leading two sets to one before losing another classic match in five.

Through the season, he accumulated nine wins over top-10 players and reached a career-high No8 in the rankings. He eventually admitted, after qualifying for the season finale in London for the first time, that he at last felt like he belonged with the best.

Sure enough, he beat Ferrer and Berdych to reach the semis and was beaten only by Rafael Nadal and, once again, Djokovic—much like every other man on the tour.

The No2 Swiss—he missed overtaking Federer for the first time in the rankings by just one match-win—turns 29 in March, but by then, who knows what new barriers Stan the Man will have broken down.

David Ferrer, 31 and still the most determined, energetic and committed player in tennis, ends 2013 at a career-high No3 after arguably the most successful season of his unbroken 11 years in Grand Slam tennis: his first Major final at Roland Garros, the semis in Australia, and the quarters at Wimbledon and the US Open. He ended the year with 60 match wins and two titles from nine finals—two of those finals at Masters level. In a career so comprehensively dominated first by Federer and Nadal, now by Djokovic and Andy Murray, and latterly men considerably bigger and younger than he is—not just Berdych but Juan Martin del Potro too—Ferrer’s durability remains a thing of wonder.

The same could be said of 35-year-old Tommy Haas, whose catalogue of surgeries and injuries seemed always to knock him back from his high of No2 more than 11 years ago. His rise during 2012 from 205 to 21 was impressive enough. That he continued his resurgence in 2013 was just as welcome for this crowd-pleasing, all-court one-hander. Two titles from three finals, the semis in Miami and Washington and the quarters at the French Open see him end 2013 at No12.

And another Tommy, the 31-year-old Robredo, dropped outside the top 100 for the first time since 2000 after leg surgery last year. Come the clay this spring, the former world No5 returned to his winning ways with his first semi-final in two years in Buenos Aires followed by the Casablanca and Umag titles. At Roland Garros, he became the first man to come back from two sets down in three consecutive Grand Slam matches, and at the US Open, he beat Federer in straight sets—his first win over the Swiss in 11 meetings—to reach the quarter-finals for the first time. He ends 2013 at No18.

• Tomas Berdych reached a career-high No5 in August;

• Fabio Fognini hit a career-high No16 in July from 47 at the start of the year;

• Kevin Anderson reached a career-high No19 from 37 in March;

• Jerzy Janowicz, at 22, reached his first Major semi at Wimbledon to reach No14 before injury took him back to a current 21;

• Grigor Dimitrov, still only 22, won his first title to reach a career-high No22 from 41;

• Ernests Gulbis surged back into the spotlight from 138 to a current 24;

• Jiri Vesely, just turned 20, won the ATP Star of Tomorrow award as the youngest player inside the top 100, climbing to 78 in August;

• 22-year-old Pablo Carreno Busta won the ATP’s Most Improved Player of The Year—he jumped from 757 to 65 in a year.