2013 tennis best bits: The first of a lightweight, unashamedly superficial interlude as we continue our look back at the season

Two down, half a dozen to go, but to leaven this year’s weighty series of reviews, here’s the first of a lightweight, unashamedly superficial interlude.

In the week that no fewer than three top-10 tennis players made GQ’s list of the 20 most stylish athletes of 2013, here are some of the highlights, and a few lowlights, from the three—Roger Federer at No7, Andy Murray at No18 and Tomas Berdych at No20—and their colleagues.

Awards bring out the best in Federer… 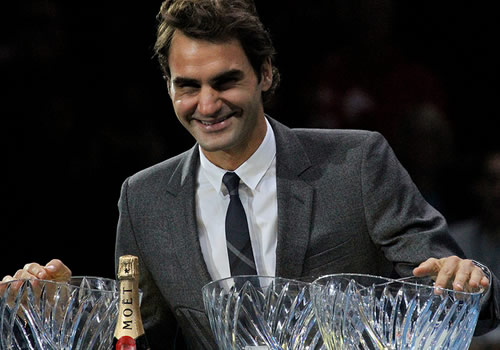 This year, Federer proved his across-the-board popularity by winning three ATP awards, one from each voting constituency: The ATP itself, fellow players and fans.

Not content with the plaudits of his colleagues by winning the Stefan Edberg Sportsmanship Award for the ninth time and the Arthur Ashe Humanitarian Award for a second, he took the Fans’ Favourite Award for an 11th time. His GQ entry talked of his “simple menswear mixes, usually anchored by a crisp white shirt” and true to his classic image, that is just how he dressed for his big moment at the World Tour Finals, his sponsor’s timepiece—Rolex of course—to the fore. 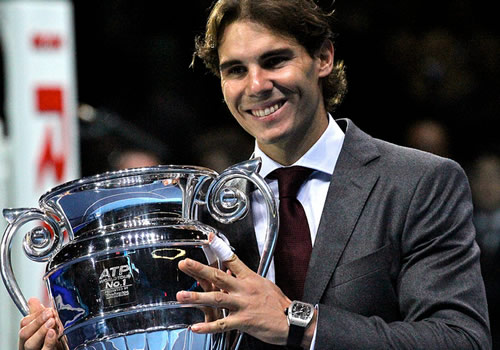 The year-end No1 title was not decided until the opening matches were played in London, and it was Rafael Nadal who sealed it, perhaps rightly after winning 10 titles, two of them Grand Slams, in around nine months. He took a leaf out of Federer’s book to receive his trophy, and while the collar and tie were not quite as pitch-perfect, the smile more than made up for it. Is he blessed with the most perfect teeth in tennis? Just possibly. 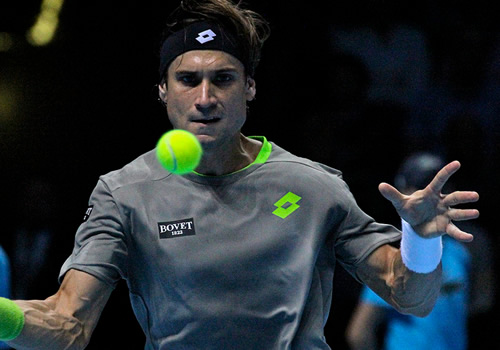 The colour theme at the World Tour Finals was sombre and understated. Richard Gasquet and Juan Martin del Potro departed from the monochrome theme but stayed safe with dark blue, while Nadal was the only one to venture into summer colours—sky blue teamed with white.

Novak Djokovic, Stan Wawrinka and Berdych went with black, Federer with the grey, lattice-patterned combo he wore in Basel—though Nike thankfully tailored the vast, baggy Swiss version into something more fitted before London. It was, though, David Ferrer who wore subtle grey as it should be worn: with vivid contrasting highlights: the dayglo lime trim against pale grey was spot on.

Method in the Stepanek madness 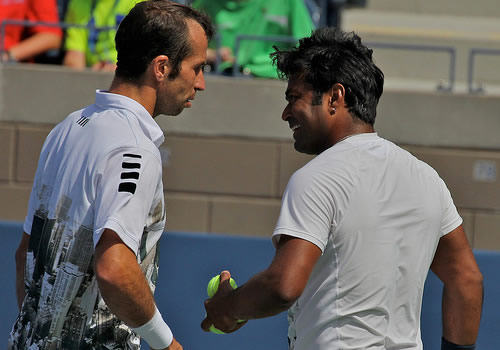 Perhaps not renowned as a fashion plate, Radek Stepanek can nevertheless be relied upon to create a buzz with his shirts. And no-one could doubt the thought that goes into those creations. The resplendent double-tailed lion on his Davis Cup shirt was taken from the Czech coat of arms. Playing the doubles tournament at the World Tour Finals, he sported a Union Jack practice shirt—with gold in place of white and, in case of doubt, the word London written top to bottom.

But it turns out Stepanek can do subtle as well, as witnessed at the US Open where he partnered Leander Paes in doubles. Both wore white and grey shirts, but look closely, and Stepanek’s pattern revealed an aerial view of New York. It worked, too: They won the title.

For a good example of how not to use the location concept, though, check out Tommy Haas at Wimbledon. It seems he didn’t get the memo before donning his Eiffel Tower T. 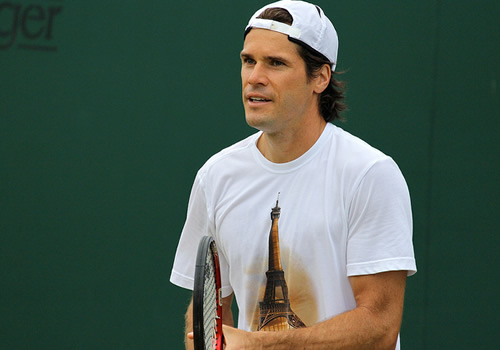 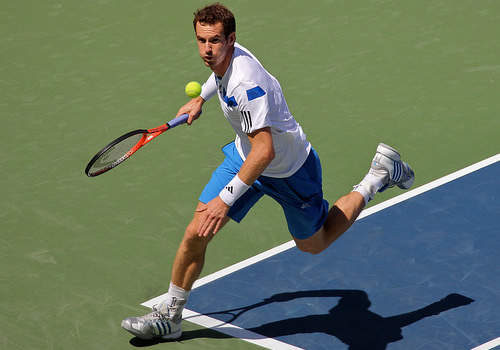 Andy Murray likes blue and blue seems to like him. Good enough reason—aside from loyalty to his Scottish roots—for him to sport blue and white so often. In Montreal, he looked a worthy recipient of that GQ gong in crisp blue and white, and not just courtesy of the sharp dark-suit-white-shirt look in which he sizzled on the cover of said magazine. At Queens, it was royal blue with yellow highlights, at Rome white and navy with a hint of yellow.

Not that hot colours do not suit: the US Open brought combinations of flame, white and black—and they all worked a treat. 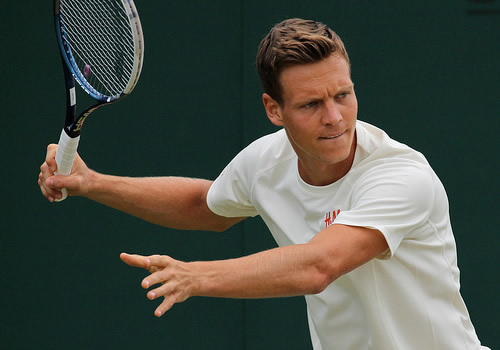 He may not be ‘tailored’ by the usual brands—Nike, Adidas, Yonex—but H & M have done a smart job with their big Czech model. Even in practice at Wimbledon, he sported that old-fashioned creamy white of cricket and lawn tennis, and he dispensed with his ever-present cap to reveal—the very sharpest of haircuts.

GQ contender in the making 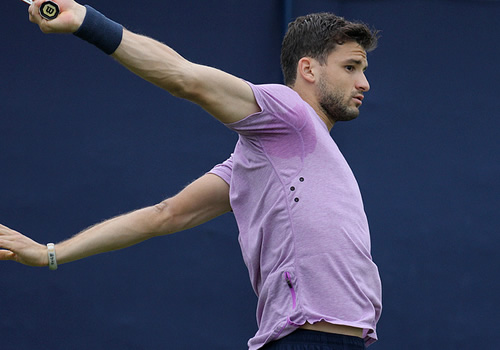 Proving that pink and mauve have their place in men’s tennis, the always-elegant Grigor Dimitrov showed it is not just his tennis that has grown in confidence. More than once during 2013, he wore pale purple for practice, teamed perfectly with navy blue.

It’s hard to look inelegant with a backhand like his, but his understated, smart Nike ensembles looked classy all year. When the awards come, he’ll be ready. 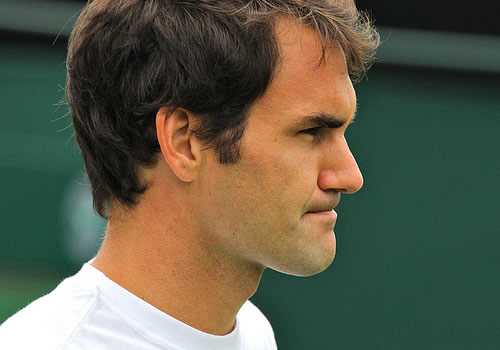 Yes, Roger, it was a small error…When Federer appeared mid-way through the Rome Masters with his famous locks shorn to just a couple of inches, Twitter went into overdrive. It transpired, he confessed in press, that the hairdresser had misunderstood and taken off rather too much.

Even at Wimbledon, a good month later, it was still short, though it was not his hair that caused consternation with the powers that be. The soles of his shoes were a rather fetching orange—the only colour in a completely white ensemble—but they were not allowed. One match, and Federer’s Wimbledon shoes were confined to the bin, replaced with all white engraved with a gold “7”: He lost his next match.

Best double combo of the year? 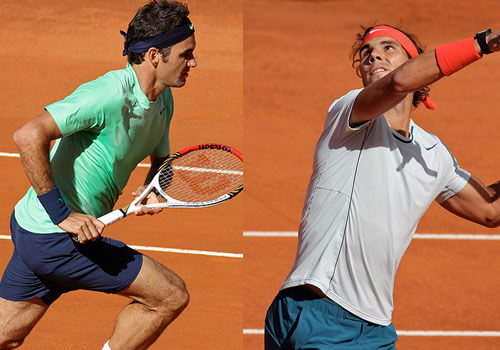 It has to be the Rome final. The Eternal City is one of the most fashion-conscious cities in the world, where the spectators come dressed to the nines in designer and remain apparently unaffected by heat of the sun or dust in the wind. It was Roger ‘n’ Rafa on final Sunday, and both were co-ordinated, top-to-toe, to perfection: Brights with darks, lifted by dashes of colour, and each complementing the burnished clay. It all hung together like a painting.

Most forgettable of the year? 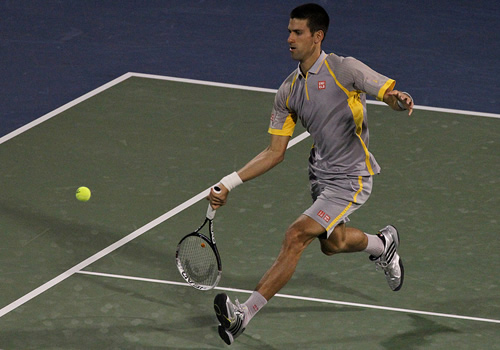 Not for the tennis, nor the setting, nor the title that Djokovic won: Not even for Serb’s day-time outfit smart white with emerald piping. The forgettable element was his night-strip: mink grey, even down to the socks, with silver shoes. One iteration had yellow trim, the other black, but neither suited his skin tone, and neither worked against the blue and green court.

Djokovic would turn to green for Montreal, to a glorious red and indigo for The Boodles, and to classic black and white with red highlights in New York: all of them effective. And of course everyone is allowed one faux pas—especially when he ends the year in dramatic black holding a silver trophy.

Also in this series: