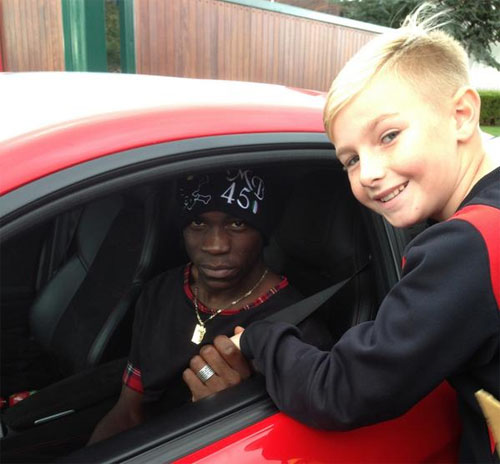 A young Liverpool supporter has described Mario Balotelli as “dead friendly to talk to” after a chance meeting at Melwood training ground.

Jack Gandy, 11, was the recipient of a signed ball last week after the Liverpool fan was rewarded for turning up to watch his beloved Reds train during the half-term break.

The youngster was cheering the 24-year-old striker’s efforts as the £16m signing worked on his shooting before passing a signed ball over the perimeter wall to Jack.

I said ‘thank you so much Mario’ and he turned round, put his thumb up and said ‘no problem’

“He was dead friendly to talk to, I was dead proud and excited,” Jack told Liverpool Echo.

Balotelli has endured a mixed start to his Liverpool career, scoring two goals in 12 appearances in all competitions.

The forward was heavily criticised after swapping shirts with Pepe in front of the Anfield supporters at half-time during a 3-0 loss to Real Madrid.

But Jack’s father, Lee, spoke in glowing terms about the Italian after his kind gesture last week.

“We just couldn’t believe it, he’s such a nice person,” Lee added.

“Jack’s a massive, massive Liverpool fan. He can tell you anything about every player.

“He’s even got a mural on his wall we had done to look like the changing rooms at Anfield.

“He broke up for half term last week and we went to watch them train over the wall at Melwood on Friday.

“Mario went to the far side and was doing long shots and we were watching him ping them in.

“Jack was clapping him as he went to go in and Mario turned and waved. The next minute he came round the back of the goal, scooped up a ball and signed it, before passing it to Jack and then told him ‘you be good’.

“I said ‘thank you so much Mario’ and he turned round, put his thumb up and said ‘no problem’.”