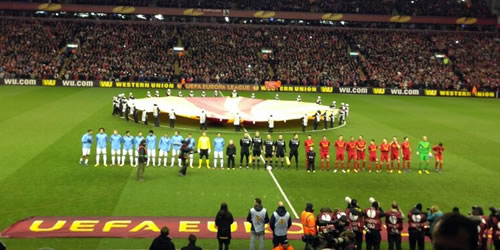 Chelsea, Newcastle and Tottenham all booked their places in the last 16 of the Europa League, but Liverpool crashed out at the hands of Zenit St Petersburg after a thrilling game at Anfield.

The Magpies made it through thanks to Shola Ameobi’s goal at Metalist Kharkiv, while Tottenham sealed a dramatic late aggregate win at Lyon as Mousa Dembele’s long-range strike settled the tie.

Elsewhere, Chelsea’s 1-1 draw against Sparta Prague was enough for the Blues, but a Luis Suarez-inspired Liverpool could not overcome Zenit on Merseyside in a 3-1 thriller.

Here is the best of the Twitter reaction from the professionals after a busy night of European football involving the Premier League clubs.

Aaron Lennon (@Aaron7Lennon) gives us his post-match thoughts: “Bad game bad performance,but we’re through and that’s all what matters, great support get home safe and we will see you all Monday”

As does Kyle Walker (@kyle28walker): “A lot of Tom Daley’s tonight!!! Buzzing for the team an everyone associated with Tottenham #COYS”

Newcastle’s Danny Simpson (@dannysimpson) reveals his delight at playing the full 90 minutes: “Felt good 2 be back playing tonight, iv massively missed it.. Great away performance from every1.. Next round here we come #nufc”

Sammy Ameobi (@Sammy_Ameobi) praises his brother after his goal: “Coooool as you like Shols #buzzing”

Republic of Ireland midfielder Simon Cox (@Scoxy31Real) thinks the captain will prove the difference: “Time for a “Gerrard” moment tonight.”

Ex-Liverpool striker Michael Owen (@themichaelowen) feels there are more goals to come: “This isn’t over! The Anfield atmosphere will see to that. Another goal before the hour mark and it could get tasty!”

Stan Collymore (@StanCollymore) tweets his post-match thoughts after the Reds come up short: “Super game, plenty of character, just a little short on the night. Plenty of positives!”

And finally, Liverpool striker Adam Morgan (@AMorgan94) says the Reds can take plenty of positives from the defeat: “The heart shown by the reds today was inspiring! #ynwa”

Liverpool 3 Zenit 1: Four lessons as Reds run out of steam at Anfield