Abu Dhabi Grand Prix 2013: What lessons did we learn as Sebastian Vettel sealed his seventh straight victory on Sunday? 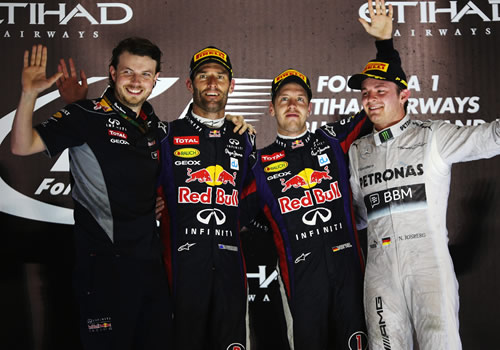 Vettel will keep on fighting – all the way to Interlagos

Some thought Sebastian Vettel might take his foot off the pedal after securing his fourth straight world title in India last week. But champions aren’t made like that. And Vettel likes nothing more than not just beating his rivals but pummelling them into a grovelling humiliation, with exhibit a this lights to flag win in Abu Dhabi. If he wins the remaining races in the USA and Brazil – and the oddsmakers are pretty bullish he will – then he’ll further cement his place in the pantheon of legends. This was his seventh straight win and his 11th of the season. Two more and he’ll equal Michael Schumacher’s record of 13 wins in a single season and Alberto Ascari’s nine straight races wins – achieved 60 years ago. Don’t bet against Vettel, it’s an expensive as the fines he keeps getting for his celebration doughnut spins.

Kimi Raikkonen is determined not leave Lotus with any friends – and it probably means that Fernando Alonso will secure second in the drivers’ standings. Raikkonen remains in financial dispute with the team and had threatened to boycott the race, from which he retired (summing up the state of his relationship team officials). Lotus clearly have major cash-flow issues – and that should put other teams on red alert. Raikkonen has already signed for Ferrari but team-mate Romain Grosjean is the in-form driver on the pit lane. After three consecutive podiums, he continued his strong finish to the season with fourth place. Grosjean – once dubbed a ‘nutcase’ by Mark Webber – has already committed to Lotus for next season, with Nico Hulkenberg his likely team-mate. Ferrari might think they’ve got the wrong man though. In the first eight races of the season Raikkonen beat Grosjean in qualifying on seven occasions. In the eight races since, the Finn has got the better of the Frenchman three times.

Paul Di Resta perfectly timed his second best race of the season, after finishing sixth in Abu Dhabi for eight championship points. Di Resta clearly likes trips to this region after his fourth place in Bahrain earlier this season. But his future at Force India is far from confirmed, a situation he admits is a ‘nightmare’. “There are a lot of us who don’t know where they will be next season but if I have the tools I know I will deliver,” he insisted. Di Resta added that team principal Vijay Mallya had recently given good signals – but no firm suggestions – about a new deal. Recent results suggest it’s time to ink that contract.