This week, it has been Roger Federer's serve that has captured the headlines, writes Marianne Bevis 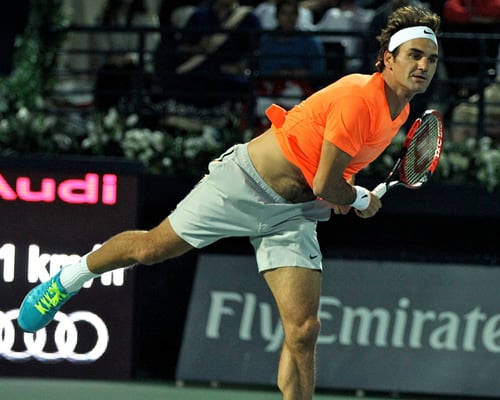 When it comes to engineering a fine tennis performance, there are few tools that Roger Federer does not possess.

His forehand is the envy of many, his footwork and movement likewise. His one-handed backhand is as elegant as they come but what he does with it is devastating—one moment a sliced cross-court whisper, the next a full-blooded down-the-line bullet, and with the touch and flexibility to make a decisive full-stop at the net.

This week, however, it has been the Swiss man’s serve that has captured the headlines. On his way to claiming a seventh Dubai Duty Free Championship against world No1 Novak Djokovic, Federer hit his 9,000th ace.

The landmark delivery came in the second game of the second set in a 6-3, 7-5 victory, though he admitted after the match that he was not certain which ace had been ‘the one’.

“I think I remember which one it was because I was even counting a little bit—I wasn’t sure. I think it was one of the swingers wide maybe. But I think it happened in the second set at some point. But clearly it is nice to get past that so now I don’t have to think about it ever again for the next 9,000 or so!” 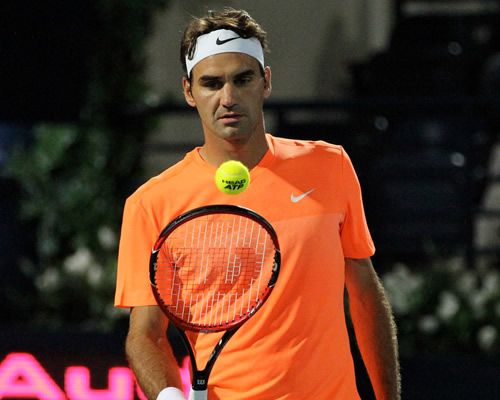 Numerically significant though that one ace would be—particularly as only three other men, Goran Ivanisevic, Ivo Karlovic and Andy Roddick, have crossed that line since 1991—it would not be significant in the match itself. For Federer hit 12 aces that night, more than in any other match during the tournament, and many of them came at far more important stages in the contest.

Federer would face 15-40 three times that night, but an outstanding service performance across the board ensured that Djokovic could not break him once, even in the super-charged atmosphere that accompanied one final break point in the last game of the match.

For Federer’s ability to turn up the heat while keeping things cool has been another of the well-oiled components in this Swiss machinery. There are few greater pressures in tennis than serving on break point, and Federer became, during the heyday of Grand Slam dominance, renowned for his coolness under pressure—and his serve.

In recent years, though, there have been occasional signs of fallibility, of nerves, of breaks made but then also conceded. It ceased to ‘a given’ that Federer would deliver the killer blow just when he needed it.

Yet in this match, almost a year to the day after he began his surge back from No8 in the rankings to knock on the door of No1 by year’s end—he won five titles from 11 finals, and more matches than anyone else during 2014—he looked like the ruthless, attacking, but oh-so-calm Federer of old.

He served out that first challenge in the third game with an ace.

Serving at 3-4, 15-40, he made four straight winning serves, one to each corner of either service box, bookended by a pair of aces. 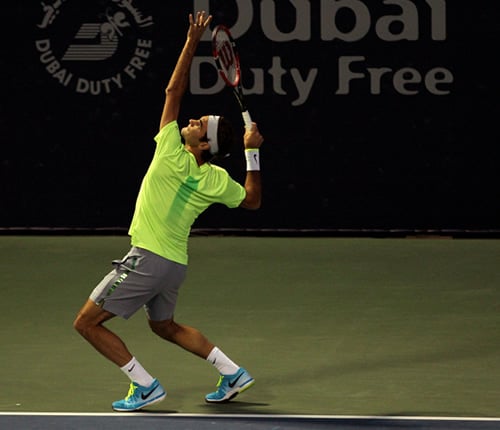 Even in the final game, serving at 6-5, an ace ensured 30-30 rather than 15-40, and his only double fault of the match was countered by one more ace. He had only to serve out the match with a serve-and-volley winner.

As that final point showed, the real key to so much of Federer success is not just the delivery itself, but the tennis he builds around it.

Federer is neither the tallest nor the biggest nor the most powerful man on the tour. So while his career tally of aces is remarkable, his average strike-rate per match of 7.7 does not come close to the likes of 6ft 11in Karlovic’s 19, or 6ft 10in John Isner’s 16.6, or the 6ft 5in, 98kg Milos Raonic’s 16.

And Federer certainly does not serve the fastest: around 125mph is closer to his usual mark—with the occasional 130mph aired on ‘special’ occasions such as his dramatic comeback against Gael Monfils in the US Open. Karlovic and the towering Jerzy Janowicz have hit 156mph, Raonic and Roddick 155mph.

But when it comes to points won by his first serve, Federer makes up for reach and muscle power with accuracy, disguise, variety, spin—and not a little tactical brainpower.

Djokovic after the Dubai final:“Over the course of his career he’s been serving more or less like this, in the important moments and big matches, hasn’t been dropping the level too much. But again, today was exceptional. I thought at least I’m going to get one good look at the rally or something, but he did a very good job.”

Santiago Giraldo to ATPWorldTour.com: “Roger has one of the most natural and fluid serves in history. He has such an ease, for not being excessively tall, he generates a lot of acceleration, a lot of accuracy, security… It’s a serve to admire; a great technique for a coach to learn and teach their players.”

And David Ferrer: “It’s very hard to return—technically is the best I’ve seen. Mainly because he always tosses the ball the same way and hides very well which side he’s going to serve to.”

Take the four service winners at 4-4: One a winner down the T, another a kicker swung so wide it beat one of the finest returners in the game in Djokovic. The last ace? A flat delivery onto the backhand line.

Each one is preluded by a quick couple of bounces, barely a glance across the net, and not a movement in his diagonally placed feet until he is air-bound. At the height of his ball toss, his left arm forms a perfect vertical through eye-line and hip to the soles of the feet, his shoulders facing his opponent for disguise. And the leap into the ball-strike is a picture of looseness: just check that left arm again.

Every delivery is precisely, fluidly, efficiently the same: It is the end result that is always so different.