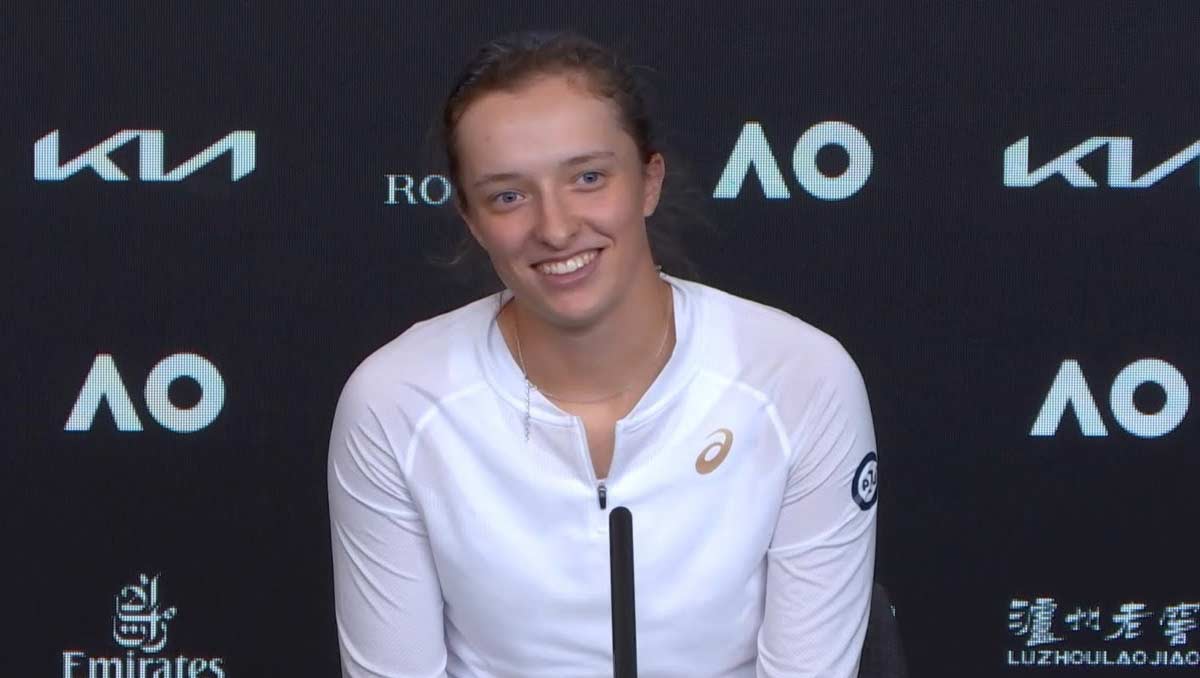 Iga Swiatek, the elegant 19-year-old Pole who thrilled Roland Garros just five months ago to win the French Open without dropping a set—indeed without even coming close to dropping a set—has now picked up her first WTA title in similar style.

By the time she faced world No12 Belinda Bencic in the WTA500 Adelaide International—the final match of this year’s extended Australian Open swing—she had not spent five hours on court, and it would take just 66 more minutes to sweep past Bencic in a blaze of winners to win 6-2, 6-2.

Swiatek was near-flawless in this first meeting with the Swiss, in what fans of tennis will hope is the first of many between these two young players. She hit 22 winners for just six unforced errors, and lost only six points on her serve—going 20-22 on her first delivery. And she was not taken to deuce on any of her own service games.

Swiatek broke in the sixth game of the first set, and sealed the set, 6-2. Bencic broke the run of four games from the Pole at the start of the second set, but could not work a break chance in the match. Swiatek swiftly broke and took a 4-1 lead, and one more break made sure of the title, 6-2.

Both women play tactically smart tennis, with variety of angle and touch from the baseline, but Swiatek’s speed of strike, and repeated changes of direction on her outstanding forehand wing, played havoc with her Swiss opponent.

“I struggled a lot today with how different she played. I just couldn’t figure out her patterns or her serve or anything at all…

“I think she plays everything just a little bit different than I’m expecting. So not the usual patterns which you would expect. I think I’m a pretty good anticipator, but today it was a little bit off—of course, thanks to her game.”

Swiatek was afterwards asked about her ability to hit such a run of form through tournaments. She said:

“For sure there is something that clicks. Not only in my head but also physically, tennis-wise. I feel pretty good on court. That’s actually maybe third time that I have this kind of flow during the whole week or two weeks at French Open.

“Yeah, our goal right now I guess is to have that more often because I know I can play great tennis. It’s just all about planning, aiming to have the best shape possible.

“So, yeah, I feel like sometimes I have weeks when everything clicks, and that’s just the effect of the work we’re doing. It’s impossible to play at the same level for the whole season. I’m really happy I have weeks like that and I can win tournaments.”

When Swiatek won the French Open, she was ranked 54, and thus became the lowest-ranked woman to win Roland Garros in the Open Era—and incidentally the youngest champion in Paris since Monica Seles in 1992. Now, she will rise to a new career high of No15, and although she has pulled out of the Qatar Open next week, she will still head to the Middle East to play the Dubai International, a tournament that boasts a maximum of 1,000 points for the champion.

“I don’t want to have injury or anything. I want my body to rest properly. Also I’m going to have more time to fight with jet lag, just travel in peace, not in a hurry. These kind of things really have a big impact. We decided we’re going to skip Doha this year.”

The charming Swiatek has a great support team and a smart head on her shoulders. Careful decision-making like this is one of the lessons she will increasingly learn to make as she becomes the pursued rather than the pursuing—and make no mistake, here is a young woman heading in one direction in 2021.