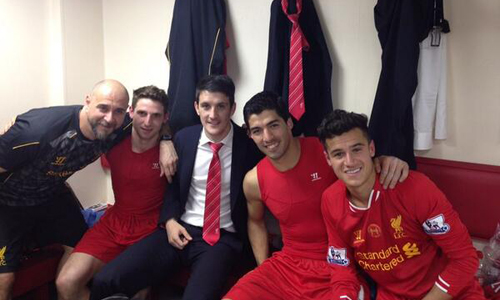 Philippe Coutinho scored a dramatic 78th-minute winner as Liverpool edged to a 3-2 victory over Manchester City.

Goals from Raheem Sterling and Martin Skrtel handed the Reds a half-time lead, but David Silva’s low strike and a Glen Johnson own goal pulled the Citizens level before Coutinho’s winner, with Jordan Henderson receiving a late red card.

Here is a selection of the best Twitter reaction from the professionals, past and present, in chronological order after Liverpool cemented their position at the top of the table.

Ex-Liverpool striker Florent Sinama Pongolle ‏(@sinamapongolle4) loves watching the home side dominate at Anfield: “Oh yes lads, get in there!!! 2-0…Liverpool just on top since the first minutes!!”

However, for Arsenal legend Ian Wright (‏@IanWright0), it is scary viewing: “Frightening Liverpool!”

Former Liverpool midfielder David Thompson (@77thomo) can’t remember a better opening 26 minutes this season: “This is the best I’ve seen Liverpool play this season what a time to turn it on!”

Ex-Chelsea defender Mario Melchiot (‏@MarioMelchiot) underlines the areas of concern for City: “Liverpool is so dangerous on the break. They always have 4 players that can hurt you on the counter. #liverpoolvcity #mmlove”

Ex-Norwich man Iwan Roberts (‏@iwanwroberts) is ready for a thriller as Silva pulls a goal back: “Here we go hold on…”

Former City striker Darren Huckerby (‏@hucks6dh6) isn’t bothered by the manner of City’s leveller: “Get in ! Who cares if it was skanky! #Mcfc”

It is a game of two halves for Joey Barton ‏(@Joey7Barton): “Liverpool looked like champions 1st half. City showing champion spirit here in 2nd. What a game. What a league.”

Former Arsenal midfielder Ray Parlour (‏@RealRomfordPele) agrees: “Be great if liverpool win the league for Gerrard. What a fantastic player and great lad. #topman. Arsenal FA Cup a most as well. #gooners”

Ex-Red Yossi Benayoun (@YossiBenayoun15): “Liverpool to win the league, Chelsea to win the Champions League, Arsenal to win the FA cup,QPR back to the Premier League perfect year for me.”