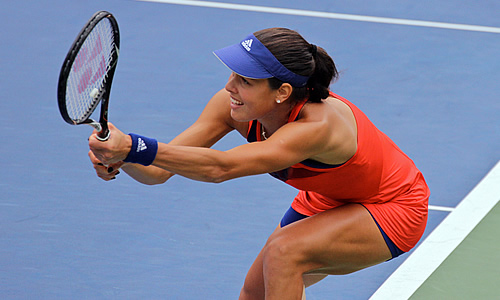 Ana Ivanovic is closing in on a WTA Finals place Photo: Marianne Bevis

It is six years since the popular Ana Ivanovic last qualified for the WTA Finals, but she is within touching distance of a return.

The Serb currently occupies the eighth and final qualifying spot, and victory at the biggest remaining tournament on the tour, the Beijing Premier, would guarantee her a place at the season-ending showpiece.

She got off to a great start in a tricky opener against the world No34, teenager and WTA Rising Star, Belinda Bencic—who reached the quarter-finals of the US Open—6-2, 6-1.

Ivanovic has a tough half of the draw, however, with No5 in the Race, Eugenie Bouchard, drawn in the third round, Simona Halep in the quarters, and Maria Sharapova or Angelique Kerber, who sits just one place behind Ivanovic, in the semis.

However one of the Serb’s Singapore rivals, Jelena Jankovic, went out of contention after a first-round defeat for the second week in a row, falling to Alize Cornet, 7-5, 3-6, 6-4.