Andy Gray column: Winning the only solution for Rafael Benítez at Chelsea

If Chelsea fail to beat West Ham United on Saturday, it will be bordering on disastrous for Rafael Benítez, writes Andy Gray 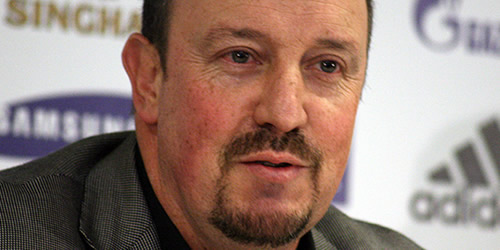 Failing to win for a third match in succession would be bordering on disastrous for Rafael Benítez at Chelsea.

The whole situation with the fans isn’t going to get better quickly. There’s a lot of discontent around, you can see that in the terraces.

But one way to stop that, or at least to bring the fans round to you slowly, is to get some wins under your belt.

It’s not like Rafa took over a club bottom of the league. He took over a team who, until a month ago, were flying high at the top of the league under Roberto Di Matteo and looked pretty untouchable.

They looked very close if not better then Manchester United and Manchester City and now they are off the pace and you don’t want to be languishing behind this early in a season. It’s amazing how quickly that has changed.

Chelsea fans will have been content with a point against City, but to be held to a goalless draw by Fulham would have been very disappointing because that is a game they have to be winning if they want to challenge for the title.

I do feel sorry for Benítez. He was asked if he wanted the job and who wouldn’t? It’s a marvellous club with a great recent history, the European champions, and you get the chance to manage a fabulous array of talent. Any manager would jump at that chance.

He had nothing to do with the Di Matteo sacking, he was just the man who came in once it had all been done, and yet he’s the one getting hammered for it and it’s going to have a negative effect on the team.

True, it’s not been an ideal start. When you think about how many attacking players they have, it’s all been a little bit disappointing in that respect. They have to be scoring more.

But Rafa’s getting his feet under the table and he’ll have a few more days to work with them and hopefully for Chelsea it will get better as they move on.

The Spaniard might make them better defensively – something which cost them dearly under Di Matteo at Juventus – but will that take something away from them in an attacking sense? We will have to wait and see.

In terms of everyone going on about his impact on Fernando Torres, I think it’s too much to ask for Benítez to walk into a club and pick up a kid who has looked like he’s lost it since the latter days of his Liverpool career.

He’s lost a good yard of pace since that injury in 2010 and I don’t think he has properly recovered from that. Anyone who thinks Rafa can walk in and wave a magic wand and get back the Torres of 2008-09 is sadly mistaken.

What he can do is restore an appetite for goals that seems to have been lost. All you need to do is watch his movement and you can see in a heartbeat.

Torres has no confidence whatsoever – that needs to change, and fast.

Rafael Benítez: Chelsea fans must realise I’m doing my best for them