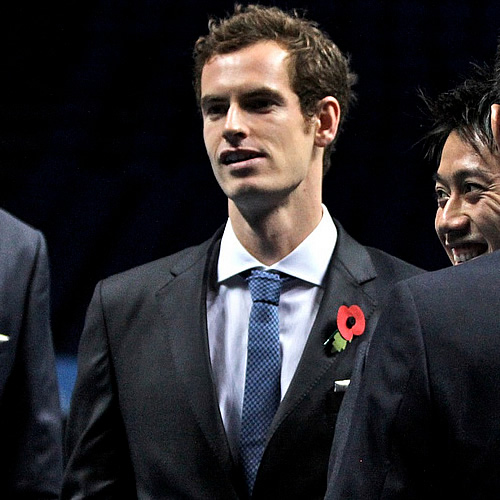 It is always a moving occasion, but in this 100th anniversary of the outbreak of the Great War, there has been an extra poignancy.

So when, at the 11th hour on Remembrance Sunday, the vast O2 Arena stood in silence in memory not just of the millions killed in that distant war but to respect those who have been affected in all conflicts, it was an extraordinary two minutes.

By chance, one of the Royal British Legion’s past campaign figureheads, Andy Murray, was about to take to Centre Court to warm up for his opening match at the ATP World Tour Finals—the start of his campaign to win the prestigious title for the first time.

His website, just the day before, announced that once again he would be lending his support to the Poppy Appeal by incorporating a poppy into his kit throughout the tournament.

The 27-year-old Scot’s grandfather served in the Royal Army Medical Corps and his great grandfathers were in the Royal Engineers and the RAF, and he has regularly shown his support: In 2011, Murray fronted the Royal British Legion’s poster campaign.

The winner of this year’s ATP Arthur Ashe Humanitarian Award explained: “On Remembrance Sunday, it’s important that everyone, including the crowds at the O2 and the players, pause for reflection; to remember those who gave, and give, so much. I’ll be wearing my poppy with pride on court as I do off it, to support the Royal British Legion’s Poppy Appeal and the Armed Forces community past and present.”

Murray takes to court for the opening match of the three round-robin contests he must play if he is to advance to the semi-finals next weekend, against the huge talent of Kei Nishikori.

Next year, I want to be top-five all the time and maybe rise to No3 or No2

The Japanese man has threatened to hit the top ranks for a couple of years, but his progress has been slowed by injuries. However 2014 brought the breakthrough, reaching his first Masters final in Madrid and his first Grand Slam at the US Open. He has won four titles this year, too, including back-to-back tournaments in Kuala Lumpur and Tokyo this autumn to reach a career-high No5 ranking.

And with an exciting, aggressive, all-court game, the London debutante is clearly ambitious for more: “Mentally I need to be ready for the first match against Andy and his home crowd. I have to imagine I have played on the stadium court… I want to win the whole thing, but it will be a tough tournament. If I can play good tennis for five matches, I will have a chance to win the whole thing. 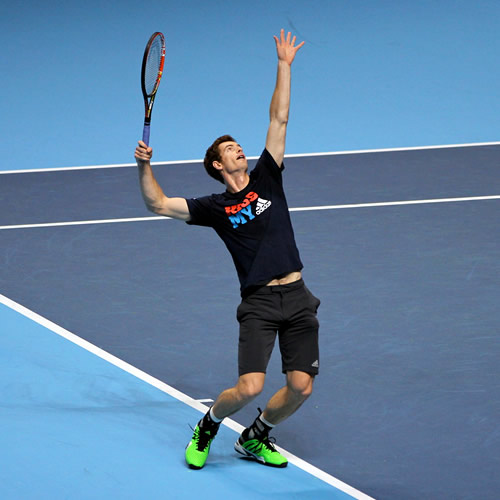 “I just need to believe in myself. Next year, I want to be top-five all the time and maybe rise to No3 or No2. I hope to reach a Grand Slam final again and win one of the Masters.”

Murray goes into the match with three wins from three meetings, but they have not played since the start of 2013, and this is a more confident, more complete Nishikori. It will be a tussle, and is certain to produce some charismatic tennis.

If Murray ends the week as champion, he will complete a hat-trick of London titles having claimed Gold at the 2012 Olympics and then the Wimbledon title in 2013—and he has picked up the Queen’s title along the way, too.

He has certainly been in the kind of form this autumn that bodes well. He went all out to qualify for London after slipping out of contention following a tough return to the tour from back surgery, and comes to the O2 after six back-to-back tournaments and three titles to surge back to six in the rankings.

He arrives, therefore, optimistic that he can target his first victory at the ATP World Tour Finals. “It’s unusual that I played so many tournaments, but you get confidence by winning matches. I’ll obviously try to finish in the top four if I can. A few weeks ago it was about reaching top 10 and (thinking) ‘Will I make London?’

“It’s been a tough year in a lot of respects, so I’ll do my best this week to try and get some good wins under my belt.”

He will be wearing his heart on his sleeve, as he always does, but will be wearing a poppy there too. And he will have much of London in his corner not just against Nishikori and another first-timer, Milos Raonic, but even against the most experienced man in London, Roger Federer.

Perhaps, at the seventh attempt, 2014 will end Murray’s wait for that final London title.