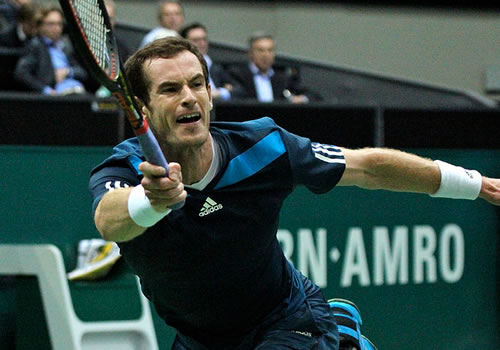 In his pre-tournament news conference, Andy Murray admitted to several reasons for taking a late wild card to the ABN AMRO tournament in Rotterdam this week.

On the surface, it looked like a rash decision after an opening season on the hard courts of Australia followed by a dash to the outdoor clay of the United States—and two strong wins to take GB to the Davis Cup quarter-finals.

But his lack of match-play during the last three months of 2013 due to back surgery meant he wanted more court-time ahead of the next big swing of the season—the big, hard-court tournaments of the Indian Wells and Miami Masters.

I don’t have many points to defend in the next few weeks, and it’s an opportunity for me to improve my ranking

He explained: “I came back from [Davis Cup in] San Diego, and was pretty happy with the way I was playing. With the surgery and a long break, I hadn’t had a lot of matches. When you haven’t been playing a long time, then you start playing again, you get used to competing, and I was enjoying playing tournies and not being in pain. So I quite fancied playing before I went to [the outdoor hard-court] Acapulco.”

But there was another compelling reason. Murray had lost ranking points and was now down at No6. With big Masters events ahead—and the next Grand Slam in Paris on the horizon—there was a big incentive to return to the top four, thereby avoiding the most dangerous players—Rafael Nadal and Novak Djokovic—in the draw.

“Having not played, also ranking drops a little bit. I don’t have many points to defend in the next few weeks, and it’s an opportunity for me to improve my ranking as well as get back on the match-court again.”

And it’s all been working out very well. Seeded No2, Murray saw one of the big threats, Tomas Berdych, drawn in the top seed’s half—the one topped by Juan Martin del Potro.

He also got the longest possible break to acclimatise to the indoor courts at the Ahoy: His first match was the last of the first round. And that match was not against one of the unseeded threats such as Gael Monfils or Jerzy Janowicz but Frenchman Edouard Roger-Vasselin. Murray raced through, 6-3, 6-3, already in the knowledge that his next opponent, Dominic Theim, would be the youngest and least experienced in the draw.

So things looked upbeat for Murray. Before he played for his quarter-final place, his half was already clear of all its seeds: Marin Cilic took out Jo-Wilfried Tsonga, Igor Sijsling dispensed with Mikhail Youzhny and Philipp Kohlschreiber put out a weary Richard Gasquet.

Thiem is an undoubted talent and, aged 20, is on a fast-rising trajectory. But despite being en route to the top-100, he had thus far won only eight from 17 matches on the main tour.

Asked about the single-handed youngster from Austria, Murray was appropriately and calmly objective: “I’ve actually seen him play a few times. I saw him, I think, in the quarters in Vienna. I also saw him a bit in Doha at the beginning of this year. He’s obviously young, but I would assume after this week he’ll be in the top 100 for the first time, and he’s going to continue to improve.

“It’s tough to formulate a perfect game plan, but it will be a good test for me to play against a young guy. He will have a lot of confidence and not much to lose. I look forward to it.”

It turned out to be a battle of the highest quality against an opponent who was fast, strong, and possessing multiple skills.

Thiem could hit serves at 215kph. He could conjure drops shots with such disguise that he left Murray rooted to the spot many times. His forehand was flat and powerful, again passing Murray on the baseline on numerous occasions. As for his backhand, it is that rare and beautiful thing—especially among young players—a single-handed powerhouse not entirely dissimilar from that of Stan Wawrinka. He could fire top-spin cross-court and down the line, and engage in some crafty sliced rallies with one of the best.

It started well enough for Murray while a nervy Thiem scattered errors among the winners, and the Briton broke twice despite some aggressive tactics from the Austrian. But once in his stride, Thiem had Murray on the back foot and broke back, following it with a love hold. He could not break again, though he had a chance in the ninth game, and Murray took the set, 6-4, but they had scored equal points.

The second was almost as tight, another 45 minutes of intense, long rallies, and this time just one break of serve, to the young Thiem. He went 5-3 up and then served out with a 213kph serve, a forehand winner down the line and his first ace of the set: 6-3.

By now, the crowd was entirely entranced, cheering on the underdog with each winner he hit, then gasping at a Murray retort. The first game of the final set alone took eight deuces, saw Thiem fight off four break points before finally conceding a fifth with a double fault.

Perhaps he was tired: This was new and demanding territory for Thiem, and he had already played two qualifying matches and beaten the classy Jarkko Nieminen in the first round.

But not a bit of it. The Austrian fought bravely, still firing winners, still running for everything and still hitting big serves: He held his next service game to love.

He even had Murray in trouble at 0-30 down on serve but Murray’s resilience and terrific defensive skill held, and the Briton served out the match—after a final rally worthy of a standing ovation on its own—6-3.

It had taken Murray two hours, 21 minutes, and it had also launched Thiem onto the big stage: Many more players will now sit up and take notice of this young player. Because, as Murray said with a wry grin,

“An exciting game to watch but not much fun to play: I’m sure we’re going to see a lot more of him!”

He added later: “It’s tough because, for me, it would be a match I’m favourite to win. I remember playing matches like that when I was his age and it was a lot of fun (smiling)! Now it’s a bit more stressful. But when I finish the match, I can appreciate his game and how he plays.”

Murray’s next opponent, Cilic, is more of a known quantity. Murray has beaten him in all but one of 10 meetings. Even so, the Croat is in fine form at the moment, fresh from winning Zagreb and beating Jo-Wilfried Tsonga.

Murray will hope Cilic does not “do a Thiem” and produce, as Murray afterwards described, “unbelievable shots, huge winners that appear—as the opponent—high risk shots, surprising, huge, hard shots!”