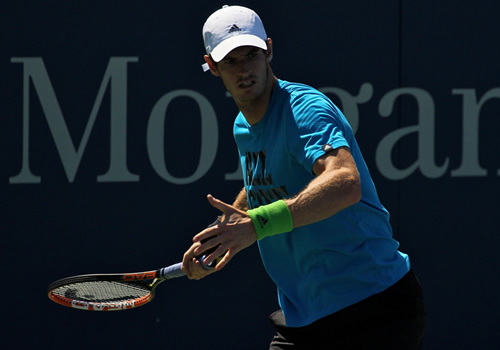 It’s not that US Open champion Marin Cilic was playing poorly when he took on Andy Murray in the quarters of the high-quality Beijing 500.

But right from the off, in the first game of this starry quarter-final match, Murray looked like the man who had twice won a Masters title in China—in Shanghai—from three back-to-back finals.

With each match played in China, since he grafted to the title in Shenzhen last week and worked his way through Beijing this week, Murray has been finding the rhythm, pace, and confidence to pull off top-notch shots, pull out remarkable defence, throw up lobs, throw in drops—and simply out-manoeuvre his opponents—even this Grand Slam champion.

Murray worked a break point in the first game, broke in the third and, to make the point, broke again in the fifth to lead 4-1.

But for a slip by Cilic on the first of three break points, the set may have turned in the next game. The Croat lost his footing, lost his rhythm on the next return, and saw a net cord flick back on the third.

Through it all, though, Murray remained relentless. His timing off the ground, his pace in defence, his angled slice and his cross-court forehands forced a growing number of errors off the usually resilient Cilic serve.

At 1-5, the Briton—completely out of view of the cameras—chased down a Cilic smash to fire a winning backhand pass and earn one more break point. This time, he forced a Cilic error and broke for the set, 6-1.

Thus far, neither man had served at their best, both below 50 percent. With the second set, both upped their level—and Cilic in particular responded strongly. This time, it was Murray who found himself under pressure on his opening serve, and then facing a break point in his second and his fourth.

But Murray remained impressively focused, making few errors, and aced to hold. There was little in it as he served out for 5-4, but then his outstanding return game drew an opening double fault from Cilic, followed by two drives long from the baseline.

The final point displayed the very best of Murray: first a delightful sliced forehand return, then a demanding angled backhand and finally an acute, dipping forehand to draw a desperate, lunging volley into the net from Cilic. It was set and match to Murray, 6-4.

The last time these two met was in Rotterdam, and Cilic thumped Murray into submission in 72 minutes. It was the signal that the tall, quietly-spoken Croat was ready to fulfil his potential, starting the year with two titles form three finals, taking eventual champion Novak Djokovic to five sets at Wimbledon, and demolishing Tomas Berdych, Roger Federer and Kei Nishikori on his way to the US Open title.

Now, then, this win marks Murray’s highest ranked scalp since his return from back surgery at the start of the year. Just as crucial, it has taken him past David Ferrer in the Race to the World Tour Finals—along with Milos Raonic, who has also reached the semis in Tokyo.

Next in the sights of both Murray and Raonic is Berdych at No7, and both would watch with some anticipation as the Czech took on John Isner in another of the Beijing quarters. So small is the points gap between six men in the top dozen that if Berdych lost, he would slip behind both Raonic and Murray into ninth place—and Murray would slip inside the crucial top eight.

As it happens, Murray and Raonic would have to wait a while: Berdych continued his own impressive and consistent form to race past Isner, 6-1, 6-4, in 74 minutes.

And Murray’s hopes of more points in Beijing now face the ultimate challenge in his arch friend/rival Djokovic. The two men, separated by just a week in age, will meet for the 22nd time, the third time this year, in a country where both have outstanding records and huge followings.

But in Beijing in particular, Djokovic has owned the court. His straightforward 6-2, 6-4 victory over the youngest of the London contenders, Grigor Dimitrov, took the Serb to 22-0 in a tournament that he has already won four times.

Djokovic was the first to qualify for London, soon after he won the Wimbledon title to regain the No1 ranking, so he has other prizes on his mind, such as clinching the year-end No1 ranking.

There will, then, be a lot at stake when Murray and Djokovic meet in what is always a compelling match-up, as the Serb acknowledged: “I’ve seen a little bit of [Murray’s] matches this week. He’s hitting the ball very well. Every time I play him, it’s a huge challenge. It’s a very physical match. A lot of long rallies, exchanges. I do not expect anything less than that tomorrow.”