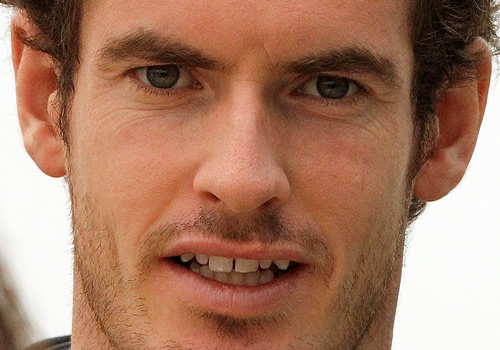 Someone in Andy Murray’s shoes who had a bit of a persecution complex might, by now, be starting to feel a touch paranoid.

For as the Briton readies for his first campaign in Dubai since reaching the final here in 2012, when he beat both top seed Novak Djokovic and fifth seed Tomas Berdych before losing to Roger Federer, he is faced with a similarly daunting task—except that this time, he may face Federer before Djokovic or Berdych. Hobson’s choice.

But that is always supposing Murray ever manages to get a proper practice session on Dubai’s fast and, until today, sand-strewn courts before his first match on Tuesday. For fate has not shone on his efforts to find a partner either to knock against or to play with.

Murray wanted to practise with a leftie before taking on the big-hitting game of Gilles Muller, who has been enjoying something of a renaissance in his 30s to reach a career-high ranking last week. But Fernando Verdasco had to pull out after being held up for hours at Dubai airport, and then Feliciano Lopez fell ill.

That was not the end of it.

“I was thinking of playing [doubles] qualies with James Ward, but he was still having some problems with his arm, so I was like, OK, I’m just going to leave doubles these next few weeks.”

For last week in Rotterdam, he had the same problem. To get some time on Centre Court before his first singles match, Murray thought it would be useful to play some doubles. But as he flew into Rotterdam, he found Ward had pulled out injured.

Hours after the deadline for signing up, he found himself scheduled to practise with Muller, who also happened to lose his doubles partner at the last moment, so they joined forces. Except that Muller, too, withdrew before their doubles opener with illness.

By the time Murray had recounted his catalogue of mishaps, even his deadpan delivery could not hide smiles: “So… I don’t know what’s happening; everyone I’m close to…”

And who should Murray draw in his first-round singles match? Muller.

“I know Gilles very well and he’s playing very well. The conditions here are quick which obviously suits his style.” The man from Luxembourg has a huge left-handed serve and an enthusiasm for finishing at the net. It could, as the wry Murray pointed out, be tough.

The Briton is flying solo in Dubai this week too, not scheduled to tie-up with coach Amelie Mauresmo until Indian Wells. He talked about his search for an additional coach to fill in the gaps when Mauresmo’s commitments take her elsewhere, and confirmed here that he is still not quite ready to appoint—“but I have spoken to a few people, so it’s going in the right direction.”

“It’s just I think having someone with you is better. Like for practice today, I was supposed to hit with Verdasco and he cancelled last minute, and then it’s what do I do? Fortunately, the tournament supplied its own coach who I could do some drills with, but it’s easier to work on specific things [with a coach]. You can then get constant feedback with what you’re doing whereas when you’re on your own, you have to come up with a training session yourself. It’s not perfect, that’s why most try to travel with their coach.”

So Murray’s preparations have been far from ideal—and not for the first time.

For he’s not had an easy ride since he recruited Mauresmo. It’s clear that he has taken criticism of his appointment very personally, and addressed an audience of thousands after his semi-final victory over Berdych at the Australian Open to pay tribute to her contribution.

Melbourne, of course, threw in another sting: Murray had lost his assistant coach to Berdych at Christmas—hence his current vacancy. Yet still in Rotterdam, the Briton again found himself defending both his appointment and Mauresmo: “I feel like a lot of things that have been said about my relationship with her have been very unfair. And I found it very difficult to understand.

“In my opinion there was no reason for it at the end of last year. I feel when we got to spend a lot of time together in the off-season, the improvement in my game was quite evident in Australia.

“I think she’s a very good person to work with and I’ve enjoyed it. It’s unfortunate that the Australian didn’t finish exactly how I wanted, but it was much, much better than any tennis I played last year, that’s for sure.”

If Murray has found himself handling a catalogue of problems over the last month—and aside from coaches, training partners, and doubles fiascos, his wedding plans have also found their way into the public arena—he is more than happy with one thing this week: Dubai itself.

He opted not to stay in the Burj Al Arab, regarded as one of the most luxurious hotels in the world, favouring the tournament hotel at the tennis centre itself… “because it is convenient, very close to the courts. It’s a very nice hotel and you don’t waste any time. I stayed there a couple of times, but I’m fine here.”

And if anyone knows a good hotel, it is the owner of one of Scotland’s finest, the Cromlix.

He’s an easy-going man, even when circumstances seem to conspire against him. And he is looking forward to the challenges posed when the real work gets under way, what he sees as the first in a stretch that will take in Indian Wells and Miami, despite a stop-over on the cool indoor courts of Glasgow for GB’s first round in the Davis Cup World Group.

“The Indian Wells-Miami stretch is an important few tournaments… so I wanted basically to come and get some good matches in warm conditions and play outdoors… This is obviously a very strong field here so you’re going to get good matches.”

After Muller, he could face the first Irishman ever to play in the tournament, wild card James McGee, though it is more likely to be the 77-ranked Joao Sousa. Then it could be Marcos Baghdatis, Philipp Kohlschreiber, or David Goffin, before Federer looms.

Before that, maybe Roger could oblige on the practice courts. Murray is, after all, the new world No3 this week.

Dubai 2015: Federer, Djokovic and Berdych target milestones in the desert