Andy Murray looks in good spirits after back surgery 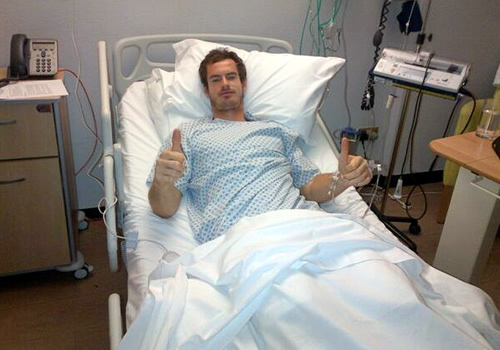 Andy Murray tweeted this picture of himself on Tuesday Photo: Andy Murray/Twitter

Andy Murray looks to be recovering well from the back surgery which is likely to rule him out for the remainder of the season.

Murray, who won Olympic singles gold at London 2012 last year before returning to SW19 to claim his first Wimbledon career title this summer, went under the knife to fix a back problem.

The 26-year-old opted for surgery shortly after leading Great Britain back to the Davis Cup World Group with a play-off victory over Croatia in Umag.

Murray, who also won Olympic mixed doubles silver with Laura Robson last summer, could return to training in November having lost in the quarter-finals on his last Grand Slam outing at the US Open.

And he appeared in good spirits after the surgery to fix a disc problem in his lower back, posting a picture on Twitter from his hospital bed with both thumbs up.

He also tweeted: “Thanks for all the well wishes, means a lot to me…” before adding: “First thing I said when I came round was “did I win?””

He added: “After spending 2 days in hospital you realise and appreciate how amazing a job carers, nurses, doctors etc do in hospitals all over the world looking after people who are in need.

“Thanks to everyone at hospital for looking after me and putting me back together again.”