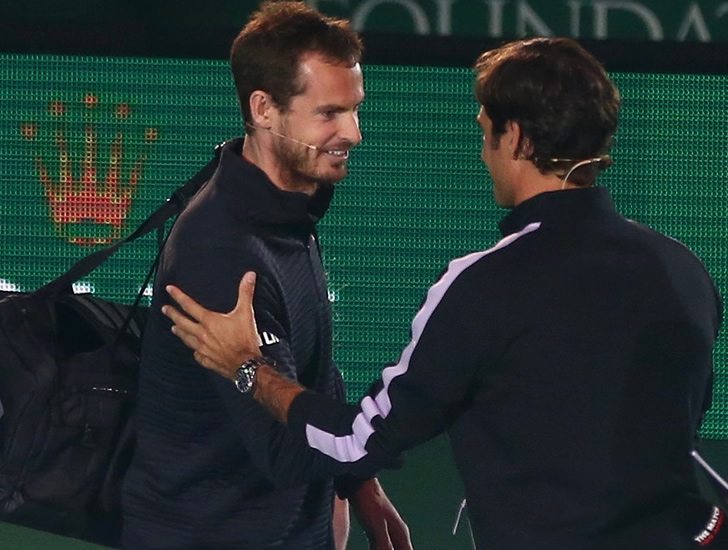 A day after Andy Murray posted videos of himself in training for the first time since his exit from the tour at Wimbledon, he has launched a treasure-packed online auction in aid of Unicef and Sunny-side3up.

Murray plays the second of his fund-raising exhibition events in Glasgow, at the SSE Hydro on 7 November, with the support Roger Federer. Murray lent his support to Federer’s own charity event in Zurich in April, but it is still something of a coup to get Federer on board during what is always an intense few weeks in the tennis calendar.

At the time of their Zurich meeting, few could have predicted how their seasons would unfold. Federer was still ranked outside the top four, despite his resurgent comeback from a six-month injury absence to win the Australian Open, Indian Wells and Miami Masters. Meanwhile, Murray held the No1 ranking that he acquired for the first time in spectacular fashion at the end of 2016: nine titles from 13 finals, and not a single loss in his last 23 matches and five tournaments of the year.

However, their paths diverged during this summer’s grass season as Murray became increasingly hampered by hip injury and Federer claimed his record eighth Wimbledon title.

Now with their second meeting of the year approaching, the Briton has slipped to No3 and Federer is up to No2. Murray will be make his only competitive appearance in six months—he languishes at No13 in the Race to London—while the Swiss is still in a position to overtake Rafael Nadal to claim the year-end No1.

Which takes this story back to these intense few weeks. While Murray has been working his way back to fitness on home soil, Federer has launched—and led Europe to victory in—the Laver Cup in Prague, has flown to Shanghai to win the Masters there, and this week begins his indoor campaign in home-town Basel. He will then decide whether the Paris Masters is viable ahead of his self-declared objective of winning a record seventh title at the World Tour Finals.

Such, then, is the context of their second showpiece event of 2017—altogether different from their first. Yet the ambitions when it comes to fundraising are just as great.

And the first phase is Murray’s online charity auction, which opens today and remains live until 6 November. It is a mouth-watering list that includes three options for straight-forward donations and then an array of one-off auction items and experiences.

Emergency shelter kit for a family: £27

Tickets for Cabaret and meet Will Young

In 2016, Andy Murray Live raised £305,000 for Unicef, of which he is the UK Ambassador, and local charity Young People’s Futures’. In keeping with his desire to benefit a different local charity each year, he has this year chosen Sunny-sid3up to share the event’s proceeds with Unicef. He said:

“Our plans for this year are even more ambitious [than last year]. By taking part in the auction you will be supporting this year’s two charities—children’s charity Unicef and Glasgow-based Sunny-sid3up. I really appreciate your support.”

Andy Murray Live takes place at Glasgow’s SSE Hydro on Tuesday 7 November. Doors open at 6pm, when a kids’ coaching session with Judy Murray and Leon Smith is followed by the singles matches between Murray and Federer. Then Murray will be joined by brother Jamie to take on Tim Henman and Mansour Bahrami in doubles.