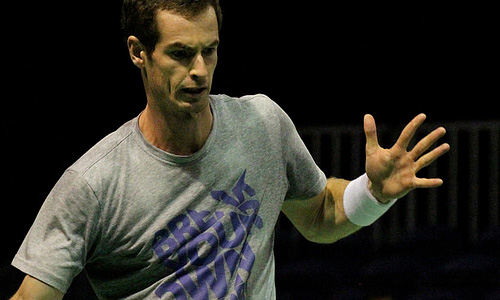 In truth, it came as something of a surprise when the ABN AMRO tournament that kicked off in Rotterdam this week announced, just a day before the draw, that Andy Murray had taken a late wild card.

Having played no competitive tennis since last September due to back surgery, Murray came back hard and strong before the main 2014 tour had barely begun.

Over New Year, he played two matches against tough opposition at the Mubadala World Tennis Championship exhibition—losing to Jo-Wilfried Tsonga and beating Stanislas Wawrinka. From there, he headed to Doha and lost to the unpredictable Florian Mayer in the second round. Unusually, though, he also played in the doubles draw.

To get still more court time, Murray prepared for the Australian Open with another tough match against Lleyton Hewitt at the Kooyong Classic, and despite attempting to keep expectations low, he looked in increasingly good form as his quarter of the draw in Melbourne opened up. He headed, indeed, to a replay of his 2013 semi-final contest—a blistering five-setter—against Roger Federer.

This time, they met in the quarter-finals and this time Murray lost in four sets, but he was soon off to fulfil a continuing commitment to the GB Davis Cup cause. Indeed his last “job” of the 2013 season was winning all three of his rubbers against Croatia to lead GB back into the World Group.

Not only did the first-round in the elite group entail the long journey from Australia to San Diego but it also made an uncharacteristic—and difficult—switch to clay mid-way through the hot, hard-court season. Bearing in mind his admission back at last year’s Rome Masters that he found the movement required on clay particularly testing for his back, how had he found it?

“I’ve normally only played three or four clay tournaments a year rather than smaller ones so [winning a clay title] is not a major goal unless it’s one of the big ones.

“Obviously the French Open is physical, but I’ve played the semis there before. I do need to improve on the surface, but this year, having played in San Diego and, I’m guessing, in Italy for Davis Cup after Miami, having played a little more on the surface, I’ll be more comfortable. In a lot of years when I haven’t played Davis Cup, I’ve gone 10 and a half months without playing on clay, whereas having played in Croatia, San Diego and probably against Italy, it will be a good challenge for me.”

But now, after a month of hard courts and a weekend of clay, he has chosen to test his back and match fitness with another switch of environment—this time on chilly Europe’s indoor courts.

There are, of course, many good reasons for this decision, and not just the obvious one of extra match-practice. It was clear, reading between the lines, that he has missed playing.

“When I came back from San Diego, I was pretty happy with the way I was playing. With the surgery, I had a long break, so hadn’t had a lot of matches. When you haven’t been playing for a long time, you start playing again, get used to competing, and I was enjoying playing tournaments and not being in pain. So I quite fancied playing before I went to Acapulco.

“I talked to my manager, he said it was possible to play here, I like the tournament, it’s very close to London, and we made the decision.”

There are tactical reasons at play as well, of course. With so much time away, Murray has dropped to No6 in the rankings, and there is a clear benefit in being in the top four when it comes to draws for the big tournaments ahead: The important Masters of Indian Wells and Miami, where he is defending champion, are close at hand.

So he has one astute eye on the immediate future: “Having not played, ranking drops a little bit. I don’t have many points to defend in the next few weeks, and it’s an opportunity for me to improve my ranking and get back on the match court again.

“My body’s felt good so far, but I think it’s also important to challenge my body a bit just now, and see how good it is. I obviously played my first five-set matches in Australia and then the Davis Cup. With all of those, you have a day off between the matches but here, for example, if I’m playing consistently, I’ll play every day for a few days.

“So the next two months, I’m still learning a little bit how I’m feeling. So far, it’s been good, though the first tournament was hard, but then when I got to Australia I started to feel better because I was practising with top players every day so my body and game were adjusting to playing at that level and intensity again.

“And then when I played Federer in the quarter-finals, that was also a bit of a shock to the system against that quality of opposition for the first time. But it’s been pretty good so far.”

It’s not the first time Murray has played here—indeed he won the title in 2009— but he opted out of both Rotterdam and Dubai last year.

He has a decent draw, too, with the third seed drawn in del Potro’s half along with dangerous non-seeds such as Gael Monfils and Ernests Gulbis. Murray’s first big hurdle is likely to be an in-form Tsonga followed by either Richard Gasquet, who comes hot-foot from the Montpellier final, or Mikhail Youzhny.

Before all that, though, Murray has been performing ‘superstar’ duties with sponsors, film crews and snaking lines of fans in Ahoy’s Sports Plaza—stretching out T-shirts to sign, posing for photos and making a lot of people rather happy.

He does not find that side of the business entirely easy: He enjoys his sport, the work, the effort and the reward. He also, these days, has the palpable confidence of a champion, but that only spurs him on to greater effort.

“My body should be ready for the French Open and in time for Wimbledon, but all the events between now and then are important to try and get matches and find the things I need to work on—and make sure I’m physically better.”

Unlucky for del Potro, perhaps, but lucky for Rotterdam.