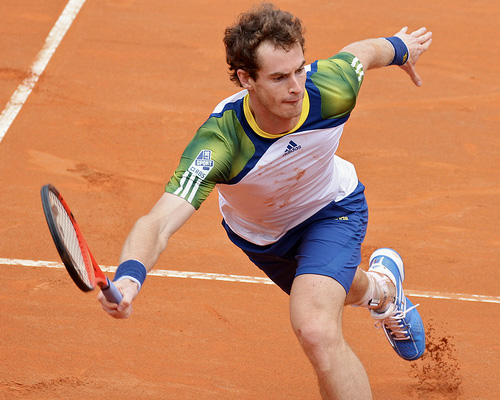 When the big names of tennis are drawn out of the hat in the two big clay Masters that are about to hit Europe—Madrid begins this weekend and Rome the weekend after—one of them will find himself seeded outside the top four for the first time since 2008.

Only once in those six years has Andy Murray not been one of the elite quartet ahead of these two prestigious tournaments, and on that occasion, in Rome in 2010, he was still the No4 seed courtesy of an absent Juan Martin del Potro recovering from wrist surgery.

It is surgery of a different kind that has contributed to Murray’s present No8 ranking. He pulled out of the tour last September for a back operation and did not return until the first week of this year.

And not surprisingly, his return to the form that took him first to Olympic gold and a first Grand Slam at the US Open, and then to a clean sweep at Queen’s and Wimbledon last summer, proved hard to regain.

So his points and ranking dropped off during the early part of 2014 as he struggled to replicate his 21-1 win-loss record of 2013 on the hard courts of Australia and North America. He slotted in extra events to compensate, including the 500s in Rotterdam and Acapulco, but an early loss in Indian Wells and his failure to defend the Miami title, took a ranking toll.

So when Murray this week takes to the surface on which he has never won a title, he will be chasing his first trophy since winning Wimbledon. He does so in the knowledge that he will be seeded outside the top four for both Masters, and that means he will be drawn to face in the quarter-finals one of the four men who lead not just the rankings but also the 2014 race: Stanislas Wawrinka, Novak Djokovic, Roger Federer or Rafael Nadal.

Should Murray still remain outside the top four when it comes to Wimbledon, there is at least some good news concerning his seeding on London’s turf. At Wimbledon’s Spring Press Conference, the chairman of the All England Club, Philip Brook, said that the strong two-year grass-court record of the defending champion—Murray was also runner-up in 2012—will keep him among the top seeds.

There is room, even so, for Murray to be ranked back in the top four by the time Wimbledon comes around. He may have dropped points and ranking in the three months of hard-court tennis that starts the season because of his strong opening to 2013, but the opposite is now true of the clay season.

For it was on the red dirt in 2013 that the alarm bells began to ring in earnest for Murray. Putting to one side that clay has, in comparative terms, been his weakest surface, his results through last spring were increasingly affected by the impact of the twisting, turning and sliding nature of clay tennis on his back.

Murray reached the quarter-finals of Madrid, then was forced to retire in his opening match in Rome, and went on to pull out of Roland Garros with back pain.

In short, he now has only 190 points on the line through Madrid and Rome. So while the French Open seedings do strictly adhere to the rankings, it may even be possible for Murray to close in on the top four there if he puts together some goods runs in the Masters.

There are just 870 points between Murray and the No5, David Ferrer, who has 360 points to defend before the French Open. Tomas Berdych at No6 has a substantial 720 points to defend. And No7, del Potro, is absent following wrist surgery.

So a rise to No5 before Roland Garros is possible. But then there is the question of No4 Federer, who has made it clear that he will pull out of whichever tournament coincides with the imminent birth of his next child. Should he miss Rome, he would concede the 600 points he gained as finalist there last year. It’s even possible that he could bypass Roland Garros.

So what are Murray’s chances of making good runs through the clay Masters?

He was one of the few top players to opt out of Monte Carlo to recuperate from a packed start to the season—though in truth, he will arrive in Madrid with only one more match on the clock than he did last year.

But it has been a difficult start, one in which Murray has found it hard to build much momentum, rhythm and confidence. He made a decent start at the Australian Open so soon after his return to competition—a quarter-final finish—but then had to make the long trip to the USA and a switch to clay, to help Team GB through the Davis Cup first round.

In the blink of an eye, he had taken a place back in chilly Rotterdam, indoors, clearly determined to get some more matches under his belt. He reached the quarters, and his next stop was across the Atlantic again to Acapulco.

That was a useful warm-up for the North American Masters, and he reached the semis, but even so he lost earlier than expected in both Indian Wells and Miami.

Then it was all change again, switching quickly to clay in Italy to contest the Davis Cup quarters.

By the third rubber on the third consecutive day, Murray did begin to look a tired man. He played well and seemed untroubled by his back, but he seemed also to lack the deep reserves of stamina on which his confidence is founded.

He has also been diverted, mentally, by the challenge of finding a new coach after the surprise departure of Ivan Lendl from his camp during Miami. So his clay training block in Spain since 7 April—give or take a short break back in the UK—has been without the guiding hand of the man who mentored him during the lofty peaks of 2012 and 2013.

For even if he does not reach that No4 seeding, it will send a powerful message to the rest that Murray is on the up—and a few weeks before Wimbledon is not a bad time to make such a statement.