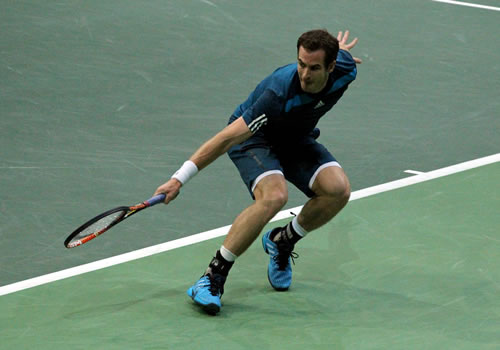 Andy Murray is through to round two in Rotterdam Photo: Marianne Bevis

Andy Murray may not be the top seed in Rotterdam. He may have come late to the party, too, signing up as a wild card just a day before the draw. And he may have fallen to No6 in the rankings after back surgery took him off the tour last September.

But Murray, since winning Olympic gold on the home grass of Wimbledon, winning his first Grand Slam barely a month later at the US Open and then crowning a remarkable 12 months with the Wimbledon title itself, has become one of the biggest names in tennis.

He is, it is safe to say, a celebrity who is in demand not only in his native Great Britain—where his efforts in taking his country to the quarter-finals of the Davis Cup World Group for the first time in 28 years made him headline news once again—but across the world. And his return to this tournament for only the third time has been greeted with resounding enthusiasm.

Amid autograph sessions in the Ahoy Plaza, duties with sponsors, and a list of media commitments as long as your arm, he has fitted in many practice sessions, and there the true measure of his celebrity has been heard loud and clear. The noise of fans carried across the neighbouring courts as he slowly worked his way through shouting kids eager for his signature. He did his best, but the crush made it his toughest mission of the day.

In keeping with his starry status, Murray was the last man to contest the opening round in the headline match on Wednesday evening.

He played Edouard Roger-Vasselin, a 30-year-old Frenchman who has, as so many men have done over the last year or so, found his best form with age. After putting together the best season of his career in 2013 to break the top 50, he reached the Chennai final at the start of this year and came to his first Rotterdam at a career-high 35 in the rankings.

So the Frenchman was not to be taken lightly, and has the kind of all-court, deft game that can bamboozle an opponent: lots of drop shots, skimming slice and fiendish lobs.

Murray’s movement and flexibility were tested thoroughly, and his defensive skills came to his aid several times as he chased down lobs and drops aplenty. He could not convert break points in the opening game, but did so in the next. Offered up more chances at 3-5, he played a signature off-backhand winner to take the set, 6-3.

I moved well tonight. Normally the first match on a new surface, it can be tricky moving

The scoreline did little justice to the complexity and intensity of the tennis: Nine games took 45 minutes, and it was a similar story in the second set.

Murray began with an assertive opening serve and broke straight away. But serving at 3-1 he had to fight off break points, and did so again when serving at 2-4. Roger-Vasselin forced errors from behind the Murray baseline but the Briton managed to hold off the attack and finally served out the match, 6-3. It had taken another 45 minutes of hard work, and both players deserved the applause they received from the biggest house of the week so far.

Murray still has some way to go, but he was afterwards relaxed and more than content with his performance.

“I didn’t have to work too hard on my service games the first set and a half, but when he was serving, I wanted to try and make him work hard for every point… And I moved well tonight. Normally the first match on a new surface, it can be tricky moving, but I was happy the way I was moved. It was a good start.”

He had, indeed, stacked up some 26 winners to just 16 errors, dropped only one point out of 13 on his first serve in the first set, and his foot speed and movement were impressive, especially for someone who had played first this year on hot outdoor hard courts, then on clay in Davis Cup on other side of the Atlantic, before heading to a damp and chilly Europe for Rotterdam’s indoor courts.

“I felt pretty good: It wasn’t too long a match. Obviously I’ve played on clay my last match, and here it’s a fairly rough hard court and it’s a change for the body— and I haven’t played a lot of matches the last five to six months. So I felt pretty good—moved well throughout the match.”

What of his next opponent, then? It will be the youngest man in the draw, the fast-rising 20-year-old, Dominic Thiem, who put out Jarkko Nieminen. The Austrian has risen from outside 300 to a career-high 113 this month and, as Murray pointed out, is set to break the top 100.

“I’ve actually seen him play a few times. I saw him, I think, in the quarters in Vienna [Thiem took Jo-Wilfried Tsonga to a final set tie-break]. I also saw him a bit in Doha at the beginning of this year. He’s obviously young, but I would assume after this week he’ll be in the top 100, and he’s going to continue to improve. It’s tough to formulate a perfect game plan, but it will be a good test for me to play against a young guy. He will have a lot of confidence and not much to lose. I look forward to it.”

Once again, Murray is scheduled to play the headline evening match. From his seat in the vast green oasis of Centre Court, he will again see the names of many past champions writ large around the arena, though his back is to del Potro’s, Roger Federer’s, Lleyton Hewitt’s and his own in 2009. Nor will he see the blank space alongside the 2014 date, but with his next scheduled seed, Tsonga, knocked out by Marin Cilic, things are unfolding nicely for the quiet, but world-famous, man from Dunblane.

The No4 seed and finalist in Montpellier last week, Richard Gasquet, fought back from a set down to beat the home man, Thiemo de Bakker, 6-7(5), 7-6(2), 6-3, and next meets German Philipp Kohlschreiber.

Nicolas Mahut was the fourth Frenchman to reach the second round when he put out lucky loser Daniel Brands, 7-5, 6-3. It earned him the much tougher opponent, No3 seed Tomas Berdych.