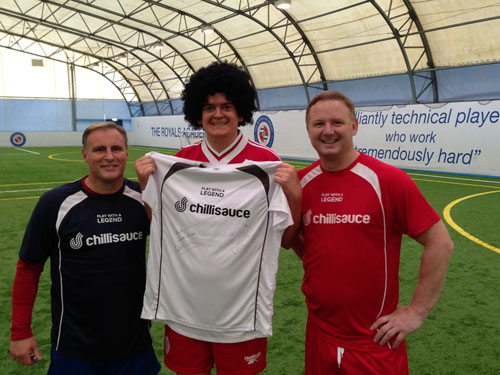 The 27-year-old forward made an immediate impact following his British-record £59.7m move to the Red Devils from Real Madrid in the summer, scoring three goals and making four assists in his first six Premier League games.

However, Di Maria missed a large part of the festive period due to injury, and the Argentina international has struggled to recreate his early-season form since his return to Louis van Gaal’s side in January.

“At the moment, he’s hit and miss. People have to realise he needs to get used to the Premier League. It’s difficult, every game is different,” Blackmore told The Sport Review.

“If you go to other leagues, you play a similar style every week and there will be some teams better than others, but there are different systems, more aerial, and route-one stuff like Stoke – and even they’re trying to change their game.

“You never know what you’ll be up against, the pitches are all different sizes.”

Van Gaal has deployed Di Maria in a variety of positions throughout the season, including an unorthodox striking role alongside Radamel Falcao at Queens Park Rangers.

Blackmore, who scored 16 goals in 189 Red Devils appearances during a 12-year career at Old Trafford, played alongside United assistant manager Ryan Giggs for four seasons before he joined Middlesbrough in 1994.

The former Wales international revealed that he had earmarked Di Maria as his compatriot’s long-term successor on the left wing before the Argentine joined Madrid from Benfica in 2010.

“He’s one of those players that plays on the edge, at full tilt, he’s got serious pace. Five or six years ago I thought he was perfect to replace Ryan Giggs,” Blackmore added.

“Luckily for us, Giggs kept playing for another four years. When he went to Madrid, I thought we were never going to see him, so I thought that was the best signing.”

Leading hen and stag do specialists Chillisauce has launched ‘Play with a Legend’ where football fans across the UK, have the opportunity to play football alongside ex pro’s.