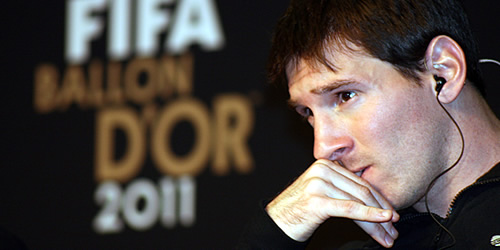 Arsene Wenger believes Lionel Messi deserves to win the 2012 Ballon d’Or because of his “outrageous” year for Barcelona.

Messi is gunning for his fourth straight prize and is up against Cristiano Ronaldo and Andres Iniesta for the prestigious award.

The Argentina international has netted a remarkable 82 goals this calendar year, just three short of the record set by Gerd Mueller back in 1972.

Arsenal boss Wenger believes the Barcelona forward would be a worthy winner but concedes that Ronaldo and Iniesta are also deserving candidates.

“It’s very difficult. For the class, Messi [should win it],” Wenger said. “He’s scored 76 goals in one year. It looks just outrageous to me. Therefore it would be one thing to reward something exceptional.

“Ronaldo has always been there and he deserves it as well. He won the Spanish championship. Iniesta won the European Championship with the national team and therefore, you could reward him.

“I’m not a big fan of these things. If you judge purely on class, you judge Messi. If you want the achievement of the year, you would choose Ronaldo and maybe Iniesta in second. That’s how I see it.”