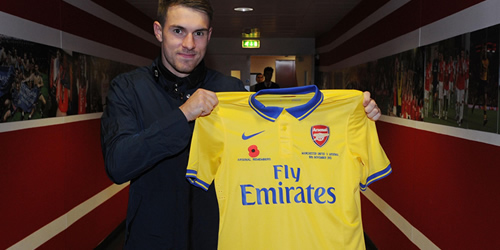 Arsenal will wear a special one-off shirt with a poppy at Old Trafford Photo: Arsenal

Wales international Aaron Ramsey was yet again the match-winner in Germany as the midfielder’s 11th goal of the season sealed a win against last term’s Champions League runners-up.

We all know they can play great football.What we saw from Arsenal last night gives them more of a chance of winning a league. Resilience !

Meanwhile, Arsenal goalkeeper Wojciech Szczesny believes there is “no better time” for Arsenal to be facing United.

“It’s been a good week for us so far,” Szczesny told Arsenal Player. “[We’ve had] two clean sheets and two results against two quality opponents, one away from home at one of the toughest venues in Europe, I believe.

“Real Madrid got battered here [in Dortmund] last year so it’s a good feeling to come out of here with three points.

“We’re looking forward to Sunday and we’re going to try and make it a perfect week.

“It would be an amazing week to get nine points out of the three games. Probably not a lot of people expected us to do so.

“There’s not a better time for us to go to Old Trafford, we’re confident, we’re enjoying our football, so we’re looking forward to it.”