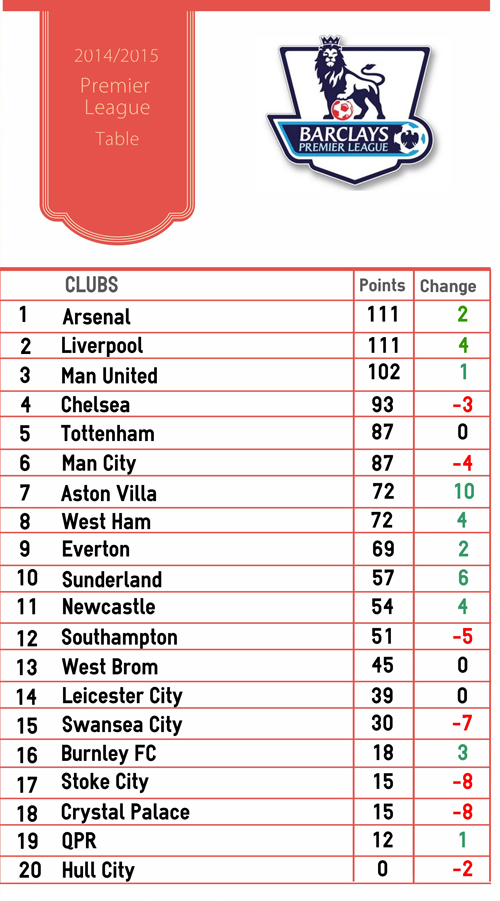 How the Premier League table would have finished if points were based on visits to each clubs' website Photo: Andrew Halliday

Arsenal would have been crowned Premier League champions in May had points been awarded for visitors to the club’s official website rather than how they performed on the pitch.

Liverpool would be runners-up on the same number of points but, over the season, Arsenal fans visited their site nearly 900,000 times more than did Liverpool’s.

Even if we had formulated the table based on the total number of visitors the top-six positions wouldn’t have changed. Ironically, Liverpool won away at Arsenal but then lost at home to the Gunners. Had Liverpool secured a home victory over Arsenal, they would have been crowned champions.

Jose Mourinho might be good at winning on the pitch, but Chelsea fans don’t seem to like their official site much. Compared to last season’s actual Premier League table, the Blues dropped down to fourth but still qualified for the Champions League, whereas Manchester City would have been sixth and playing in the secondtier European competition.

The North East was close but Sunderland won the bragging rights as they made the top ten compared to Newcastle who sat in 11th.

Burnley would have been the big winners, staying in the Premier League instead of currently playing in the Championship.

Hull would still have been relegated but would have finished the league bottom of the table on zero points – their fans seemingly don’t like the official website as much as they like their team.

QPR was an interesting one. While they finished in the relegation zone, had the league been based purely on total traffic to the site, they would have finished safe in 15th position – so their fans like the site but don’t visit frequently enough.