Arsenal remain in discussions about extending Bukayo Saka's contract at The Emirates beyond 2024, says Fabrizio Romano

The England international has emerged as one of the country’s top young attacking talents in recent seasons and has become one of the first names on the team sheet at The Emirates under Mikel Arteta.

The 20-year-old, who came through Arsenal’s youth system, started 36 of Arsenal’s 38 games in the Premier League last season, scoring 11 goals and notching up seven assists as the Gunners just missed out on a top-four finish.

Saka has also become a key player for England in recent months and made four appearances for the Three Lions at last summer’s Euro 2020 tournament.

The attacking midfielder’s current contract at Arsenal is due to expire in the summer of 2024 and the Gunners are understandably likely to be keen to tie him down to a new and improved deal.

Now, Italian reporter Romano has taken to social media to claim that the Gunners are working to secure Saka’s future, with the player himself “happy” at The Emirates as the terms of the proposed new “long-term” deal continue to be discussed.

Posting on his personal Twitter account, Romano said: “Bukayo Saka’s contract extension has always been priority for Arsenal, talks are still ongoing with his agent in order to reach full agreement on long-term deal. 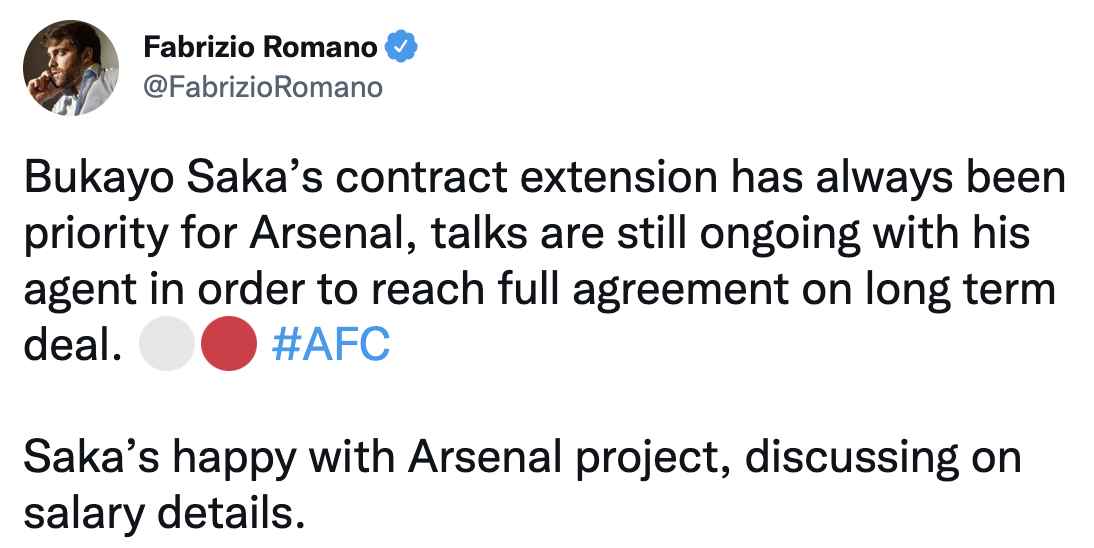 Saka has scored a total of 23 goals in 131 games in all competitions for the Gunners in recent seasons. He made his senior international debut for England back in 2020 and has netted four goals in 18 games for the Three Lions since then.

He was part of the Arsenal to to have won the FA Cup in 2019 under Mikel Arteta.

Christian Eriksen: What I really think about Erik ten Hag at Man United