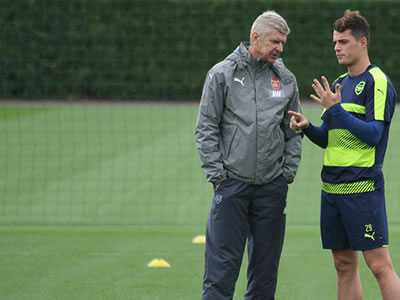 Ian Wright has admitted that he is frightened by Granit Xhaka’s poor start to the Premier League season ahead of Arsenal’s home clash against West Ham United.

The Gunners handed the Switzerland international a new long-term contract in the summer following Unai Emery’s appointment as Arsene Wenger’s replacement back in May.

Xhaka completed 81 per cent of his attempted passes in Arsenal’s 2-0 loss to defending Premier League champions Manchester City in their Premier League opener earlier this month.

The Swiss star struggled in a 3-2 loss to Chelsea FC at Stamford Bridge last weekend after the former Borussia Monchengladbach ended up with 83 per cent pass completion.

Arsenal bolstered their midfield with the addition of Sampdoria midfielder Lucas Torreira in a £26m deal in the summer transfer window.

Wenger’s successor snapped up French teenager Matteo Guendouzi in a deal from Ligue 1 side Lorient to add further depth to Emery’s options in the middle of the park.

Guendouzi has been particuarly impressive in Arsenal’s opening two Premier League losses, while Xhaka was caught in possession.

“With him [Guendouzi] and Torreira who is still really to come in and make a start I think it will be them two [against West Ham],’ Wright told Sky Sports.

“They will be the ones who are more confident about being able to get the ball in those areas and be confident enough to turn.

“Someone like Xhaka is frightening me at the moment if the ball goes to him. His confidence is shot.”
Arsenal finished in sixth spot in the Premier League table last season to miss out on Champions League football for the second successive season.