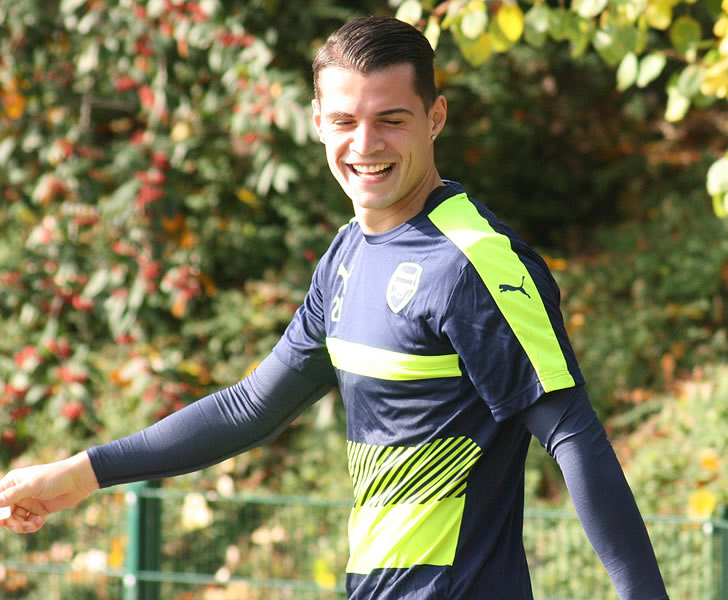 Unai Emery says he has been pleased by what he has seen from Granit Xhaka so far this season in an Arsenal shirt – but also insists that the midfielder still has room for improvement.

The Switzerland international has been a regular fixture in the Arsenal first team this season since Emery’s appointment as Arsene Wenger’s successor at the Emirates back in May.

The 26-year-old is clearly a favourite of the new Arsenal boss, with Xhaka having started all 11 of the Gunners’ Premier League games so far this season.

He played the full 90 minutes as Arsenal came from a goal down to earn a 1-1 draw with Liverpool FC in the Premier League clash at The Emirates on Saturday night thanks to Alexandre Lacazette’s equaliser.

Xhaka has scored two goals and made one assist in the Premier League so far this season but looks to be developing a solid understanding with his new midfield partner Lucas Torreira, who was named as the man of the match on Saturday.

And although Emery has been pleased by what he has seen from Xhaka recently, he still admits that the midfielder has plenty of room for improvement.

Emery is quoted as saying by Metro after Saturday’s game: “I want, with each player to continue and hope we can do better.

“He wants to improve, and I think he can improve. We want to continue with him to give him the time to improve.”

Emery then went on to discuss Xhaka and Torreira’s partnership in midfield.

“They’re important tactically and also their commitment and their work, running a lot.”

Arsenal will return to Europa League action on Thursday night with a home clash against Sporting Lisbon in the group stage.

The north London side are currently in fifth place in the Premier League table and six points behind leaders Manchester City after 11 games of the top-flight season.