Arsenal and FC Barcelona will not give up in their bid to sign Raphinha from Leeds United, says Fabrizio Romano

Arsenal and FC Barcelona will not give up in the race to sign Raphinha – despite Chelsea FC leading the race for the Brazilian’s signature, according to Fabrizio Romano.

Chelsea FC have been strongly linked with a move to bring the 25-year-old attacker to Stamford Bridge in recent days, with widespread reports having claimed that the Blues have agreed a fee with Leeds United for the proposed transfer.

Arsenal and FC Barcelona have also been strongly linked with moves to bring Raphinha in this summer, with the Brazilian seemingly likely to leave Elland Road in this transfer window.

According to Italian reporter Romano, Chelsea FC are now waiting for an answer from Raphinha on personal terms as they look to complete their first signing of the summer window.

However, Romano also says that the Blues will still face competition from both Arsenal and FC Barcelona in the race for Raphinha’s signature until the deal is done.

“Talks still on, after agreement with Leeds [£60m]. Barcelona and Arsenal will try until the end. 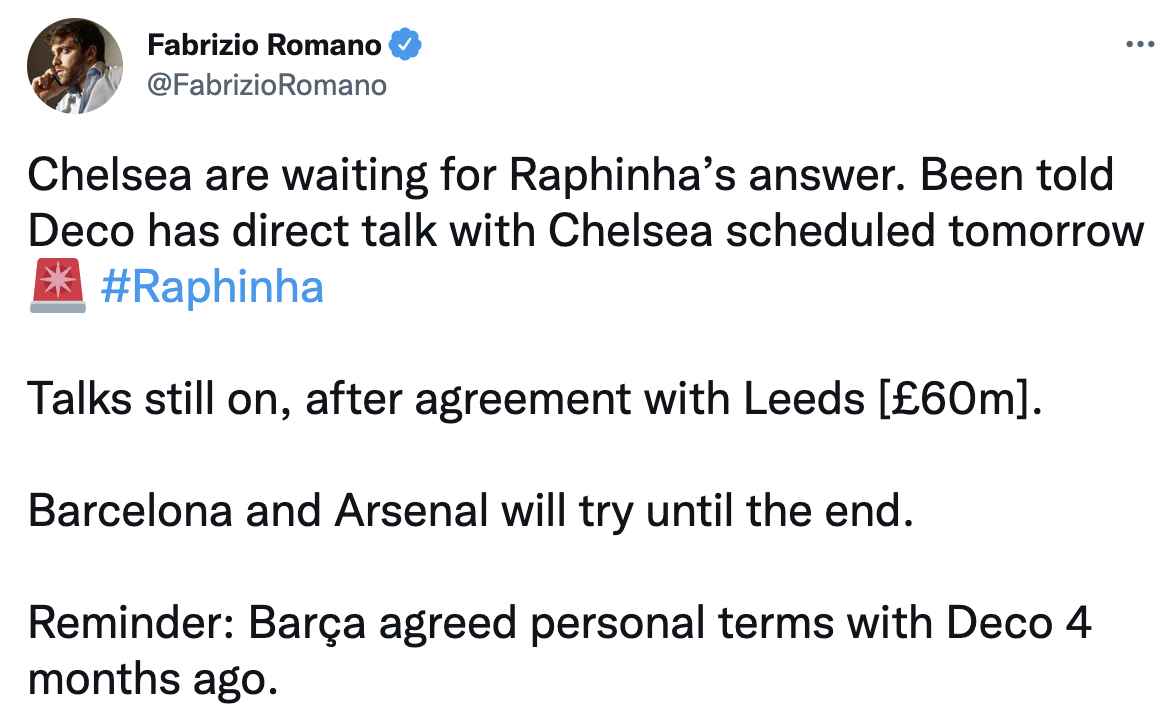 Raphinha netted 11 goals and made three assists in the Premier League last season to help the Whites avoid relegation to the Championship.

However, the speculation that has surrounded his future at the West Yorkshire club in recent weeks suggests that he could be on his way out of Elland Road ahead of next season.

Meanwhile, a host of Arsenal players reported back to London Colney for first-team training on Wednesday as the Gunners begun their pre-season preparations.

Mikel Arteta will be hoping to steer the Gunners back into the Champions League via a top-four finish after having missed out last term following their fifth-placed finish behind Tottenham Hotspur.