Arsenal are set to complete the signing of Gabriel Jesus after agreeing personal terms with the player, says Fabrizio Romano

Arsenal are set to complete the signing of Gabriel Jesus from Manchester City after having agreed personal terms with the Brazilian attacker, according to Fabrizio Romano.

The north London side have been strongly linked with a move to sign the 25-year-old forward in recent weeks as Mikel Arteta aims to bolster his attacking options at The Emirates.

Gabriel Jesus’s future at City had been called into question after the Citizens brought in Erling Haaland in the summer transfer window, an acquisition which could further limit the Brazilian’s playing time under Pep Guardiola.

Arsenal were widely reported to have agreed a fee with City to sign Gabriel Jesus in a deal believed to be worth around £45m in recent days.

Now, Italian reporter and transfer insider Romano has claimed that the Gunners are now on the brink of completing a deal to land Gabriel Jesus after agreeing personal terms with the player.

Romano says that Arteta and Edu were “key” to the deal, with Gabriel Jesus set to sign a five-year deal until the summer of 2027.

“Arsenal already agreed £45m fee with Man City as revealed on Friday. Edu and Arteta, key for the deal.” 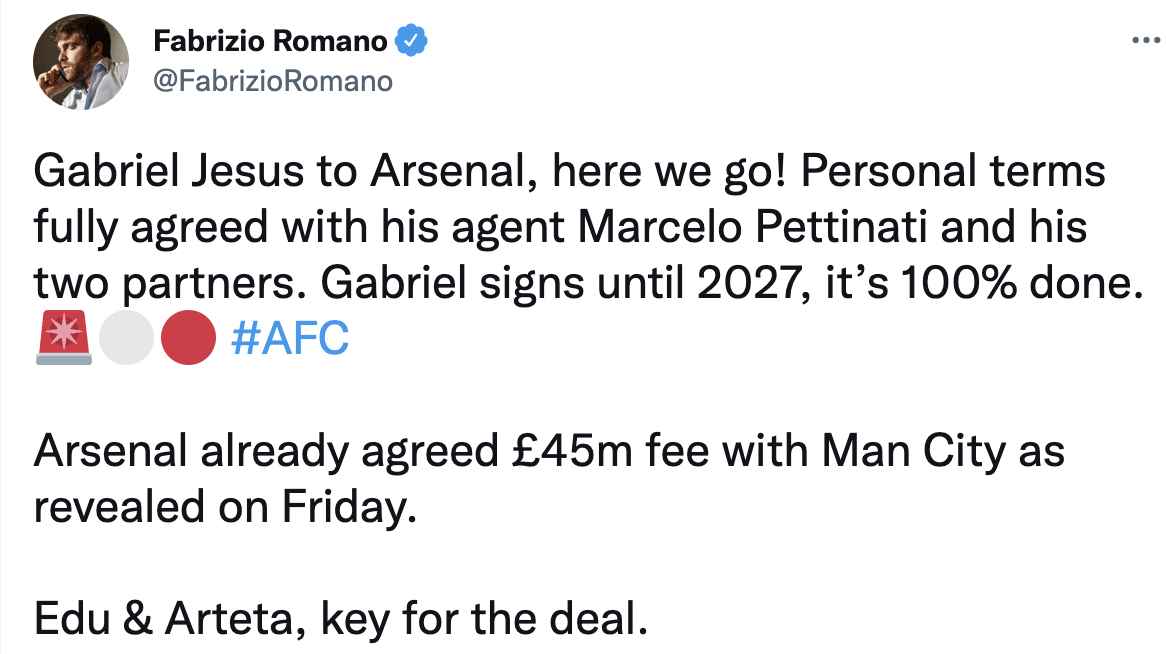 He was limited to a total of 21 starts from 38 games in the top flight last term, and he also netted once in the FA Cup and four times in the Champions League last season.

In total, the Brazil international has scored 95 goals in 236 games for Manchester City since having joined the club from Palmeiras back in August 2016.