Arsenal remain in the running to sign Gabriel Jesus from Manchester City this summer despite having missed out on a top-four finish, according to Italian reporter Fabrizio Romano.

The north London side ended up in fifth place in the Premier League table and two points behind local rivals Tottenham Hotspur as they missed out on a place in the Champions League.

Arsenal were 5-1 winners over Everton in the Premier League on Sunday at The Emirates, but the Gunners were pipped to a top-four finish by Spurs, who won 5-0 away to Norwich to seal their spot in Europe’s elite club competition for next season.

Jesus has been linked with a move to The Emirates in recent weeks as Mikel Arteta considers bolstering the firepower in his squad ahead of next season.

Now, Romano has claimed that the north Londoners are still one of the clubs looking to sign the 25-year-old from Manchester City this summer.

Posting on his Twitter account, Romano wrote: “Arsenal want Gabriel Jesus as priority and nothing has changed, even after missing on Champions League spot race. More to follow in the coming days.” 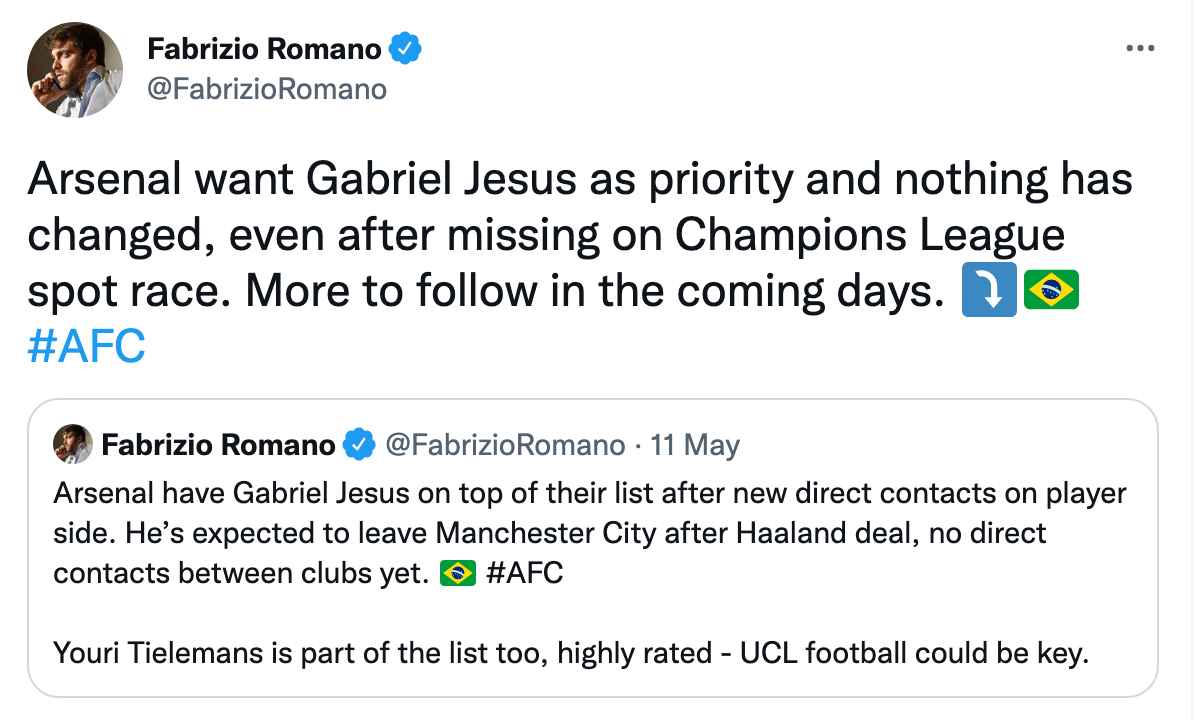 Gabriel Jesus scored 13 goals and made nine assists in all competitions for Manchester City this season.

The Brazilian was quizzed about his future after he helped City to win the title on Sunday with a 3-2 victory over Aston Villa, but the forward chose to give little away.

“About my future, it’s still uncertain,” Jesus told ESPN Brasil, as quoted by Metro. “I have a contract with City and I have already expressed my desire to the City people and to my agent. I have in my head very clear what I want.

“Today, I want to celebrate a lot with City. It’s obvious that I’m very happy here. Tomorrow, if everything goes well for me, my wife and our family, Helena [his daughter] will come to the world.

“So, I have to take advantage of this moment. Then, think about the team, smile at the team again. And, on vacation, I decide about my future.”