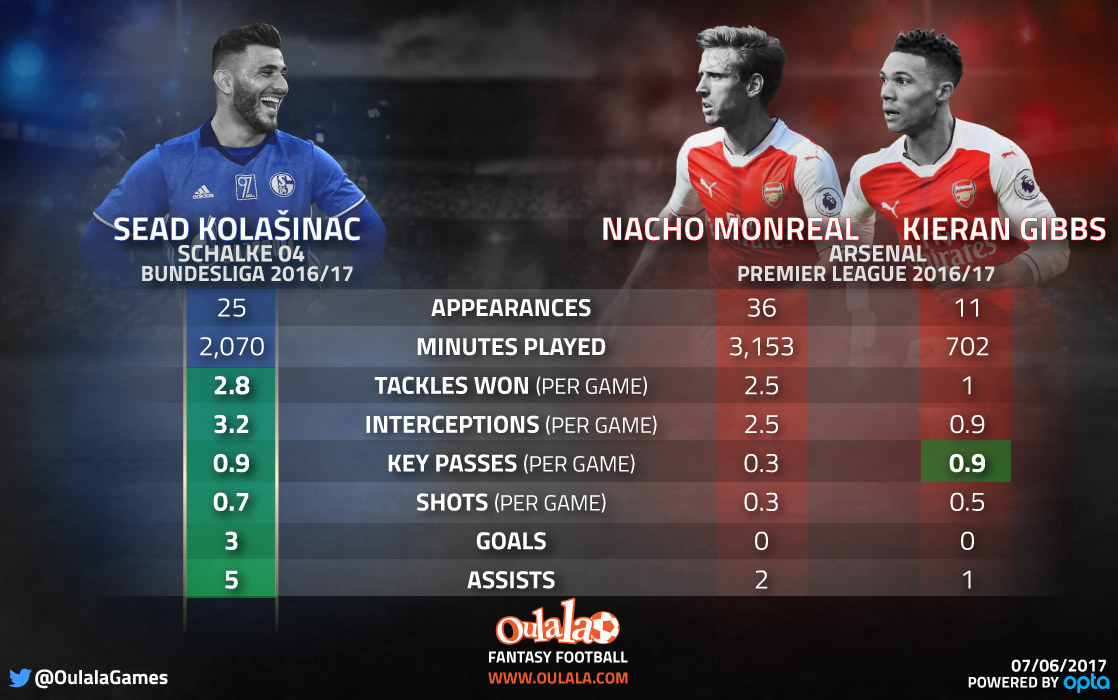 The Bosnian full-back will bolster Arsene Wenger’s options at left-back, with Kolasinac set to compete with Nacho Monreal and Kieran Gibbs for a starting spot.

And Oulala’s stats suggest the new Arsenal signing will quickly develop into Wenger’s first-choice left-back in the 2017-18 Premier League campaign.

Monreal played more minutes than Kolasinac and Gibbs last term but the departing Schalke 04 defender had the best season of the three full-back statistically.

The 23-year-old’s defensive capabilities are highlighted with his impressive average of 2.8 tackles won per game, which is better than Monreal and Gibbs.

Kolasinac comes out on top again in terms of interceptions with an average of 3.2 in comparison to Monreal’s 2.5 interceptions per game.

Gibbs manages to match Kolasinac’s 0.9 key passes per game, but having started more times than the Englishman, the Bosnian can be credited with a superior level of consistency.

Indeed, the new Arsenal signing was involved in eight of Schalke’s 45 goals in the 2016-17 campaign – a respectable return for a full-back.

Kolasinac averaged 0.7 shots per game which converts to three goals in 25 appearances in the Bundesliga. The versatile defender made five assists – too.

Both Gibbs and Monreal failed to score in last season’s Premier League and only managed a combined three assists.

On the basis of Oulala’s stats, Kolasinac looks like an upgrade on Wenger’s current options at left-back.