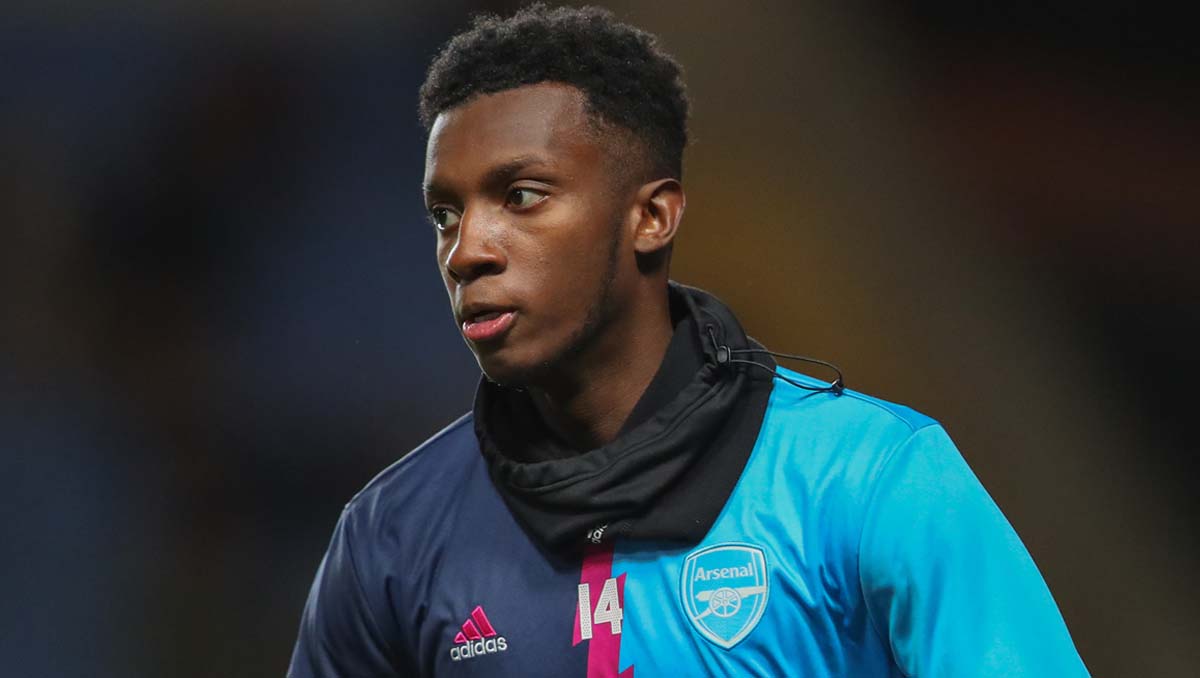 Mikel Arteta singled out Eddie Nketiah for special praise after the striker netted twice in Arsenal’s thrilling 3-2 win over Manchester United on Sunday.

The English striker has been deployed up front for the Gunners since Gabriel Jesus was sidelined with a knee injury and the forward has been in great form, having now netted seven goals in his last seven games in all competitions.

Nketiah headed home an equaliser for Arsenal in the 24th minute after Marcus Rashford had put Manchester United ahead five minutes earlier.

Bukayo Saka then fired the Gunners into the lead in the 53rd minute with a superb solo strike, but the home side were pegged back by Lisandro Martinez’s header shortly after.

However, it was Arsenal and Nketiah who at the final say, with the 23-year-old Gunners striker poking home the winner for Mikel Arteta’s men in the 90th minute to claim a big win for the home side.

Arteta was asked about Nketiah’s impact in recent games and the Spaniard was full of praise for the forward at his post-match news conference.

“What Eddie is doing is incredible,” said Arteta. “We cannot say that we saw that, we were hoping that he could do that because of the way he is, because of his mentality, because of his qualities and how those qualities fit within the team.

“Losing Gabby [Gabriel Jesus] was a big blow, it is a big blow today, but Eddie is responding and the team I think in an exceptional way.”

Arteta went on to praise the striker, who came through Arsenal’s youth system, for the way he has been conducting himself this season.

Asked about Nketiah’s qualities, Arteta replied: “The qualities that he has, how much he wants it, how much belief he’s got in himself to become Arsenal’s number nine.

“His desire, his background, we’re with him every single day, [he’s] a special kid, he’s so loved by everybody at the football club, he’s got a real Arsenal heart and experience within him and that’s really special. You cannot put that into numbers. He’s really, really good.”

Saka – who was named as the player of the match on Sunday – has been one of Arsenal’s most consistent performers this season and has now netted seven goals and made seven assists in 19 Premier League games.

“For such a young player he’s already had a lot of experience,” Keane said on Sky Sports before the game.

“He’s already got his hands on a trophy in the FA Cup, he’s had a big disappointment with England in terms of missing the penalty [in the European Championships final]. He got a lot of criticism for that but he bounced back well, which shows you good signs.

“The key for the player himself is that he looks like he goes out and enjoys the game. He looks like a really nice lad away from the game which always helps but when he’s playing, he can beat a man.

“When you’re playing for the big clubs you need one or two players that can beat a man because that changes the picture in football matches.