Thomas Partey has taken to social media to issue his backing for Arsenal boss Mikel Arteta and reveal that he will be out of action for a few games due to injury.

Partey, 27, signed for the Gunners from Atletico Madrid on transfer deadline day back in October and he has already made a number of eye-catching performances for the north London side.

The midfielder started last weekend’s north London derby clash against Tottenham but had to be substituted early in the second half after he picked up a fresh injury issue.

Arteta has found himself under fire at The Emirates in recent weeks due to Arsenal’s stuttering form in the Premier League.

The Gunners have only won one of their last five games in the top flight and they are currently languishing towards the bottom of the table.

Partey took to social media on Thursday to issue his backing for Arteta and insist that he is fully behind the Spaniard’s philosophy at The Emirates.

Posting on his Instagram account, Partey wrote: “Being part of the Arsenal family is something incredible for me, since the day I arrived I have felt so supported.

“The coach had a great influence in my decision to join this team and even though we had some bad results I know we are building something good together.

“I have had the bad luck to suffer an injury but I hope I can play again soon and fight for this team.” 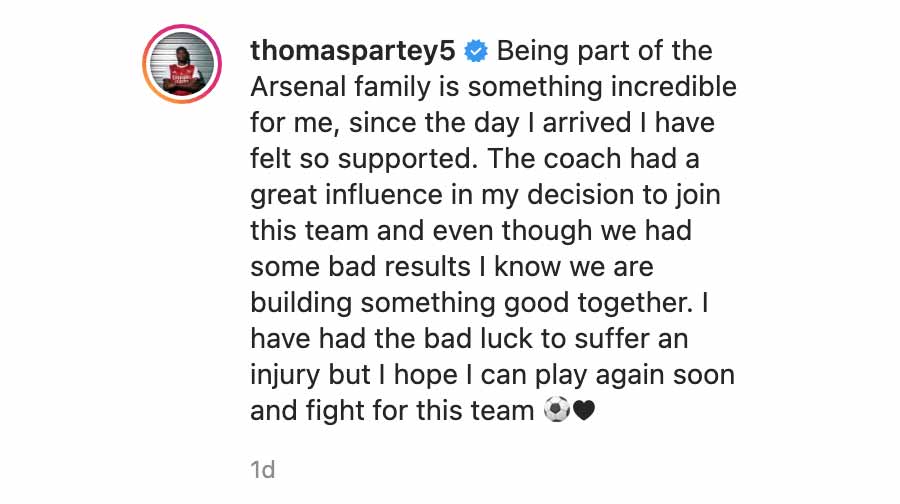 Arsenal will return to Premier League action on Sunday when they host Burnley at The Emirates.