William Saliba is firmly in Mikel Arteta’s first-team plans for Arsenal next season and the Gunners are keen to tie the defender down to a new contract, according to Italian reporter Fabrizio Romano.

The French defender is yet to make a competitive appearance for the north London side despite having signed for the Gunners from Saint-Etienne back in July 2019.

Saliba has been shipped out on loan for the three seasons since then, first at Saint-Etienne, then at Nice, and most recently at Marseille.

The 21-year-old earned praise for his performances for Marseille last season as he notched up 52 appearances for the French club. Saliba was also called up to the senior France team for the first time back in March and has picked up five caps for his country.

As things stand, Saliba is due to report back to Arsenal this summer as he looks to try and break into the first team at The Emirates next season.

Italian reporter Romano has now taken to social media to claim that suggestions that Saliba could be sent out on loan for a fourth time are “wide of the mark”, and that the defender is set to report back to Arsenal ahead of next season.

The journalist also says that Arsenal “trust” the centre-half and are keen to tie him down to a new and improved contract to secure his future.

Posting on his personal Twitter account, Romano said: “William Saliba situation. Rumours on loan move are wide of mark, Arsenal board and Mikel Arteta both count on Saliba as part of the team for next season.

“Been told situation could only change in case of crazy bid. Arsenal trust him – keen on discussing a new contract.” 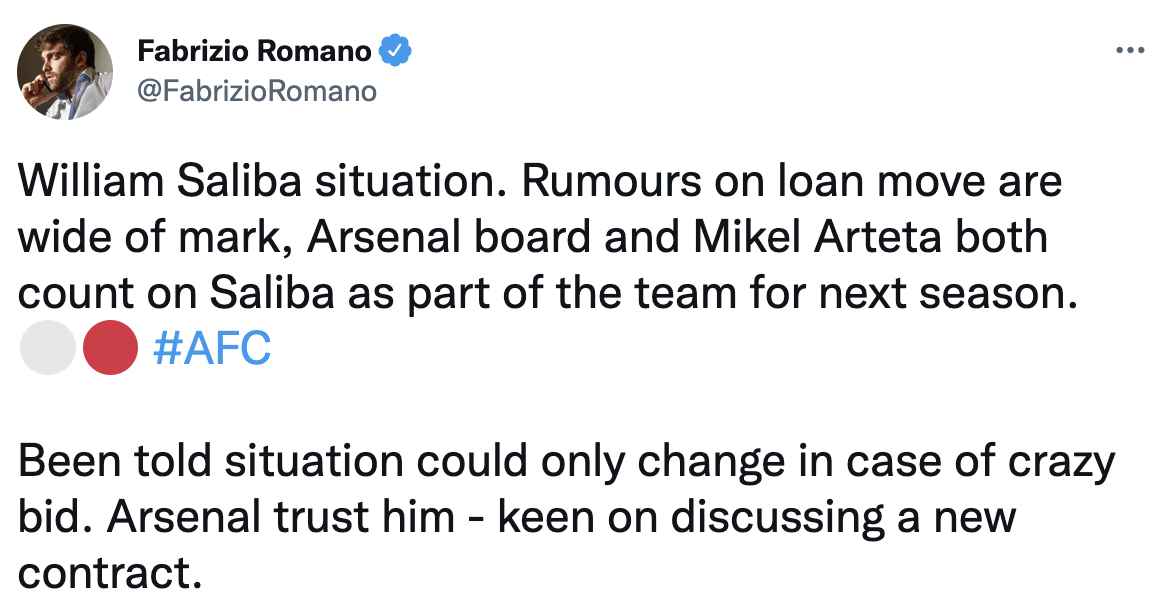 Saliba made 36 league appearances for Marseille last season as he helped them to finish as runners-up to PSG in the Ligue 1 table.

Fabrizio Romano: 27-year-old is ‘keen’ on move to Chelsea FC